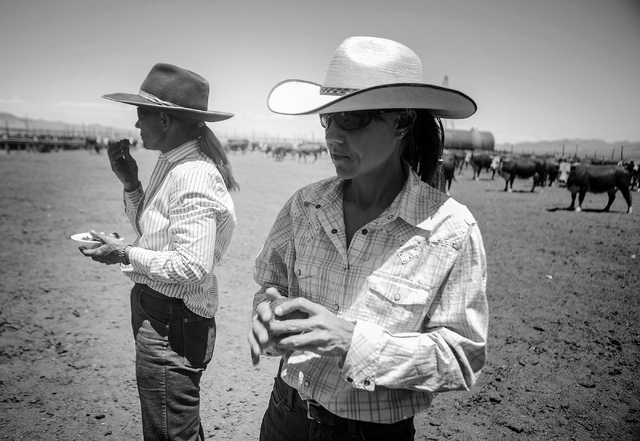 Ann Fallini Berg (left) pictured here with her sister Corina Fallini Jackson at the Twin Creeks Ranch in 2014, addressed the Nye County School District board of trustees about the need of re-opening the Warm Springs school as soon as possible. If the school is not opened at some point his school year, some families will be forced to split up and live in different areas to attend school. Jeff Scheid/Special to the Pahrump Valley Times 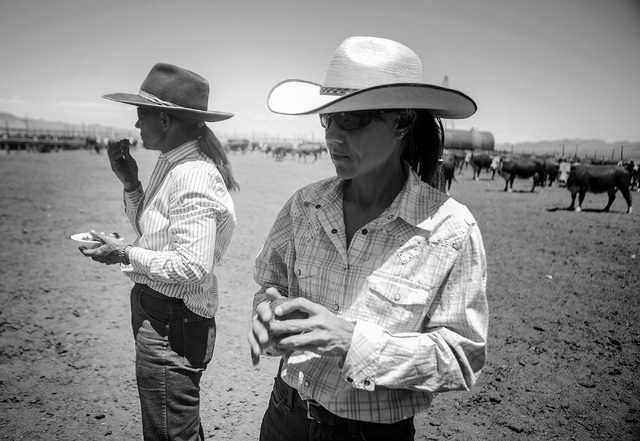 Anna Fallini Berg , left, dines on Rocky Mountain Oysters while her sister Corrina Fallini Jackson eats an apple during a break in branding at the family's Twin Creek Ranch, located about 200 miles north of Las Vegas as seen Wednesday, June 4, 2014. The Fallini family has been operating the ranch for five generations. (Jeff Scheid/Las Vegas Review-Journal) 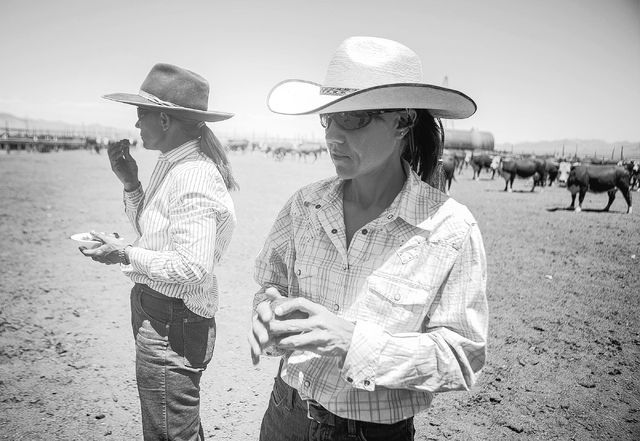 Anna Fallini Berg , left, dines on Rocky Mountain Oysters while her sister Corrina Fallini Jackson eats an apple during a break in branding at the family's Twin Creek Ranch, located about 200 miles north of Las Vegas as seen Wednesday, June 4, 2014. The Fallini family has been operating the ranch for five generations. (Jeff Scheid/Las Vegas Review-Journal)

The Nye County School District Board of Trustees moved one step closer to reopening the Warm Springs School outside of Tonopah.

The board unanimously voted at its meeting July 19 to approve the motion to continue with reopening efforts, with the hope to reopen the school as soon as possible.

Longtime Nevadans, the Fallini family owns the Twin Creek Ranch, where the proposed school would be placed.

Despite the good news for area residents, the timetable for the possible reopening of the school is unknown and is likely to not take place until the 2017-18 school year.

Director of transportation Cameron McRae did give the families a bit of hope that a reopening could take place at some point during the 2016-17 school year, stating that if the perfect storm came together, there is a slight chance of that happening.

At any time, if we were able to get this all done and get through all the stuff to get the structure and get the instructor, I mean, in theory, you could open the school at anytime, McRae said.

The news of the possible reopening being put off for another year means the nine students, made up of the Fallini family, ranchers and ranch hands that are currently impacted by the lack of a school in the area and the families of those children, may be forced to break apart and live in different towns to ensure their child has a school to attend in person.

The majority of the families will go ahead and split, Anna Fallini said. The mothers will move to a nearby city or town. St. George, (Utah) Alamo, Tonopah, I think are the nearest towns for the families now.

I think without the approval of this, I think thats what is going to ultimately end up happening for those nine children.

NCSD Superintendent Dale Norton explained that the best option for a structure at the ranch would be a modular classroom.

The Fallini family has stated that they would pay for any costs related with moving a modular classroom building, which is currently housed in Round Mountain, to the area. McRae estimated the cost of moving the modular structure to the ranch would be around $40,000.

We would be willing to incur that cost on our own, Fallini said. I could come to the other families and see if we could get a fund together, all pitching in together, to get that unit moved out there. So you guys arent actually having to deal with any of those movement costs.

In addition, the Fallinis said they would pay for electricity and internet at the school as well.

With all that said, superintendent Norton explained outside factors are also contributing to the possible reopening.

Its the bureaucracy of adding the fire alarm, the septic, and all of that. Thats whats holding us up, Norton said. That is part of the problem that we just cant expedite.

Other issues brought up that could present themselves by McRae were planning and zoning issues with adding the building to the ranch.

Despite the possible roadblocks, Norton reaffirmed his backing of the process to reopen the school.

I am fully in support of trying to facilitate this, because these students, in talking to the parents, will move on from Warm Springs, on to Tonopah High School or reside in the Tonopah area as they go through high school, Norton said. As long as we can meet the thresholds and go backwards financially on this, I am all in favor of trying to do it. I dont see this not being a good thing.

If a school were to be reopened, Norton said, the number of students would likely increase and that they would have to at least keep the initial estimated class count enrolled at all times.

My recommendations would be that we do it if we can maintain at least that number of nine students or more, Norton said.

Some of the children attend online school now, but the children and Fallini are not eager to do so for the upcoming school year, as she wants her child to be able to experience the face-to-face benefits traditional schooling presents.

There are several children in the same situation in the area as my son Giovanni and were asking you to provide a teacher for an education that would not only provide social interaction for the children in our area, but would also prevent the families from having to split into separate households, Fallini said.

With there being a chance the modular school could be open at some point this school year, there is a chance that the families affected by the decision would home school until the on-site facility is operational.

I think moving ahead and opening it as as soon as possible would be the best option, she said. They may give some of the parents the option to home school temporarily until they can be moved into the school and keep that family unit together.