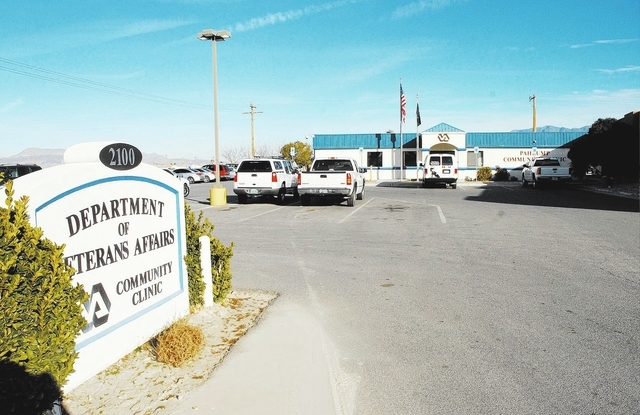 U.S. Rep. Steven Horsford, D-Nev., heard pleas from area veterans’ advocates for a new clinic during a meeting at the Pahrump Town Annex in June. At the time, Bob Hammond, Disabled American Veterans Chapter 15 service officer, said the lease on the existing building would end in December, but said now it will be renewed on a month-to-month basis.

“The last I had it was the clinic would remain open as long as they needed it, until such time as they had a new one to move into,” Hammond said.

Bids were requested for a clinic to be located north of Highway 372 and south of Basin Avenue, west of Highway 160 and east of Leslie Street, Hammond said. He assumes both bidders proposed to build a new clinic next to Desert View Hospital.

“I am pleased that the VA has worked with me for several years to ensure that veterans in rural Nevada have the access to health care they have earned and deserve. Unfortunately, for a number of factors outside the control of the VA, access to quality health care has been reduced in Pahrump, forcing veterans to travel more than 50 miles each way for some medical services. That is why a long-term, full-service, Community-Based Outpatient Clinic is necessary,” the letter states.

A letter from Isabel Duff, director of the Department of Veterans Affairs Southern Nevada Healthcare System to Senator Reid, dated Nov. 5, confirms the existing Pahrump clinic will remain in operation until they move into the new clinic, which at 9,948 square feet, will be more than double the size of the existing 4,500-square-foot clinic.

“We have over the months gotten a number of calls about our outpatient clinic there in Pahrump,” Reid said. “Every day my southern Nevada office in Las Vegas hears from veterans about this facility.”

“They travel more than 50 miles each way for medical services that are not provided in that facility,” he said. “The new facility will be two times the size of the old one. The new facility has two bidders already and is awaiting final approval which will take two to six months.”

The construction will take from a year to a year and a half, according to VA officials.

“Both bids were assessed through an appraisal process and found to be reasonably priced for the area. However both bids exceed regulated cost for this standard capital investment and will require higher level approval,” Duff said in her letter to Reid.

That approval has since been granted, Reid said.

Hammond said he hoped for more facilities at the larger clinic, like another doctor, along with more support for mental health services for the Post-Traumatic Stress Disorder (PTSD) clinic and brain trauma injuries.

“Most of the doctor care will still be referrals, going to specialists at the hospital in Las Vegas or contracted out for services here locally as far as X-rays, MRIs, things like that,” he said.

In the meantime, Hammond said, “right now everything’s been one delay. I just tell people I’m just waiting for them to put the shovel in the ground. It’s probably been two or three years just hashing things back and forth.”