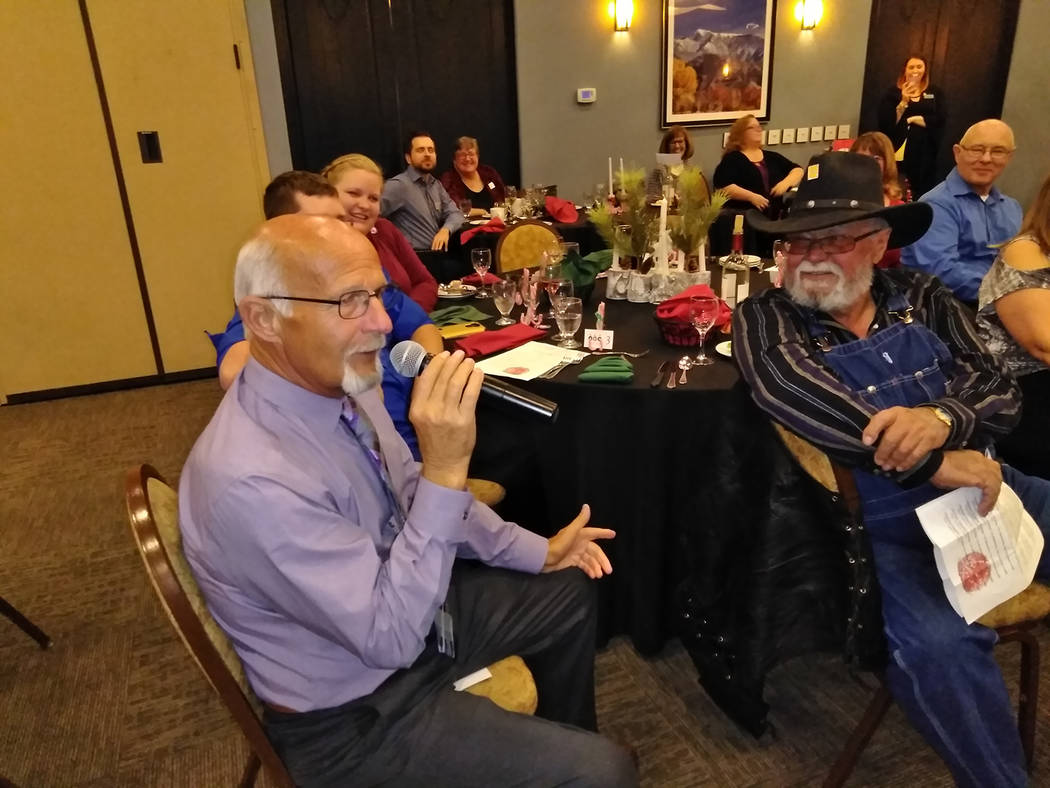 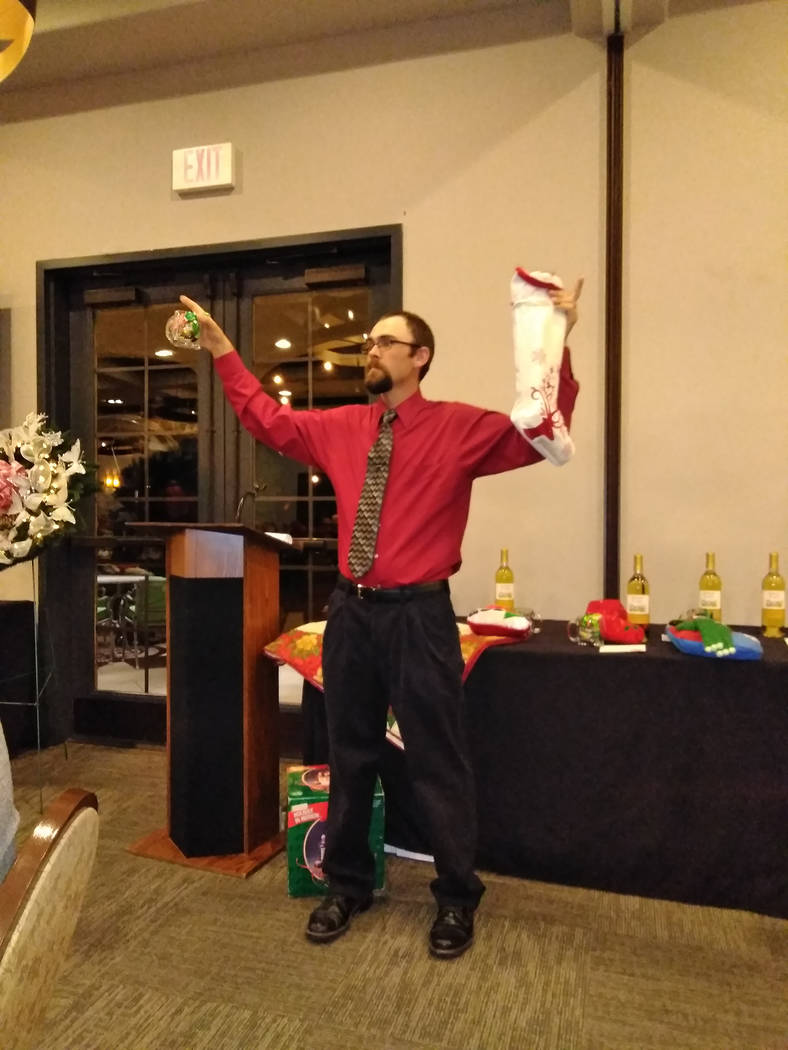 Selwyn Harris/Pahrump Valley Times Auctioneer Ron Gipson holds aloft two items up for auction at the annual fundraising event. Gipson, along with co-auctioneer Ski Censki drew as many laughs during the lighthearted affair as they did dollars. 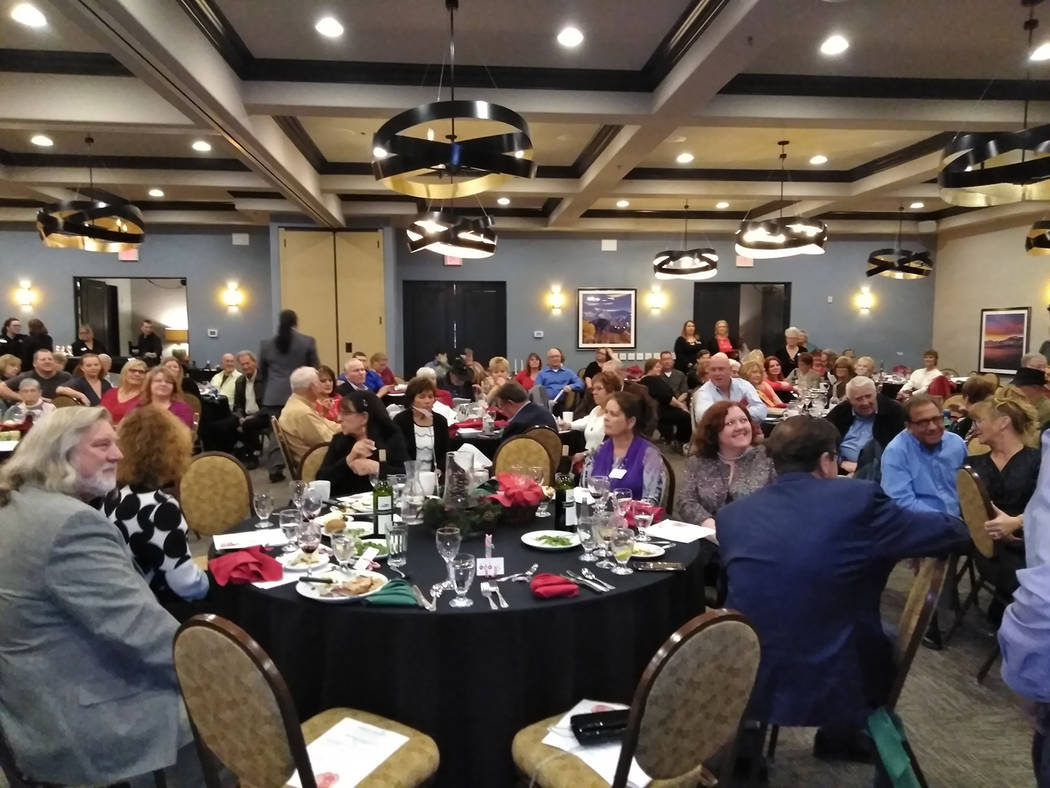 Selwyn Harris/Pahrump Valley Times Organizers for the13th annual Festival of Trees auction were forced to add an additional table and chairs to seat the more than 160 guests attending the Dec. 1 event. Hospice officials are considering a larger venue for future hospice fundraising events.

Pahrump’s Nathan Adelson Hospice’s largest fundraiser of the year was hosted inside the Grill Room at Mountain Falls Golf Club.

The event attracted an overflow crowd, as upward of 160 guests attended the 13th annual popular community event on Friday, Dec. 1.

During the gala evening, five creatively decorated Christmas trees, 10 wreaths, 11 stockings and several miscellaneous items were auctioned off to raise funds for hospice services in the Pahrump, Crystal and Amargosa Valley areas.

“We earned over $12,000 with the auction money and our raffle tickets that we sold,” Fortier said. “We beat last year’s total of $10,000 and we are really happy with how much Pahrump and the entire community supported this event.”

Fortier also said the event was completely sold out, much to the delight of organizers.

“We also had a full house, and we had to actually put in an extra table to provide space for additional attendees,” she said. “Prior to this year’s event, we knew that we were sold out and as a result, we are now considering making the venue a little bit bigger next year to accommodate more people.”

“The dollars raised tonight make certain that the company is able to have sufficient funding to serve the patients’ needs that we encounter,” she said.

“This is the 13th Annual Festival of Trees fundraiser for Nathan Adelson Hospice, and not only is it important for its longevity and impact to the community, but what we do, and our commitment to Pahrump is very much something that we hold dear to our hearts, serving the residents here and being with them through the long haul, just as we are with our patients through the long haul.”

Fearon further spoke about how the event has evolved over the 10-plus years in existence.

“It began as the Festival of Trees, but now we have included Christmas wreaths and stockings,” she said. “It seemed like there was a little more chocolate donated in the stockings that ended up going to many of the bidders because of the amazing work of extraordinary auctioneers Ski Censke and Ron Gipson, who were a big part of the process of raising tremendous dollars on behalf of Nathan Adelson Hospice.”

The Oscarson’s contribution generated more than $1,500 during the bidding process.

“It is just amazing to see the support of the community and all the work that goes into this from the staff of Nathan Adelson Hospice, as well as all of the other folks who participate in this wonderful event,” Oscarson said. “We had a number of great people who placed very generous bids tonight. It really helps people who are in need of these important services that Nathan Adelson Hospice provides.”

Numerous Nathan Adelson Hospice officials and representatives attended the event, including full-time Chaplain Richard Martin, who spoke about the importance of the agency within the local community.

Martin has been associated with Nathan Adelson Hospice for more than two years.

“I had a father-in-law who passed away during his hospice service, and that inspired me to move from a hospital chaplain to the hospice,” he recalled. “There is no question that as a society, we are fully invested in avoidance and denial when it comes to hospice care. What’s unfortunate about that is end of life is a reality for each one of us, and the way in which that journey takes place is within our influence and control.”

Preparing for the inevitable

Fearon, meanwhile, noted that to an extent, hospice services help the stricken individuals, along with their families.

“The family members and caregivers of someone who is going into that part of their lifespan, really need to have additional support and comfort, along with the patient themselves,” she said. “A lot of people don’t realize that once our patients pass away, there is still a lot of care and support that is needed by the surviving family members, and many times, those resources just are not there.

“That is why events such as this one are so important because it helps us go the extra mile for needs that would not necessarily be provided otherwise,” Fearon said.

As the Festival of Trees is the largest annual fundraiser for the agency, Fearon noted that there are additional events and programs, which also support the various services provided by the hospice throughout the Silver State.

“In Las Vegas, we do a multi-cultural luncheon, which is also an educational symposium in the springtime,” she said. “We also host a fashion show, a wine tasting and what’s known as our ‘Serenade of Life’ concert, which was last held at the Smith Center. It’s very interesting because you see physicians by day and accomplished musicians performing by night.”

Additional holiday-themed events are scheduled later this month, according to Fortier, as the annual “Angel Tree” program is now in full swing.

“That is for families here in the community who may need a little extra help during the Christmas season,” she said. “We are adopting families so we can purchase various Christmas presents for them. Local residents still have time to adopt a family or individual for our Angel Tree program.

“The deadline is December 15, so if anyone would like to adopt a family or individual, they are welcome to come down. This is our 11th annual Angel Tree event. Thus far, we have had several adoptions since last Friday. We have a tag on the Angel Tree which denotes what type of gifts the recipients are hoping for. We have also adopted families in the Nathan Adelson Hospice community, so it benefits our people as well.”

Nathan Adelson Hospice is the namesake of the man who founded the agency decades ago, according to the hospice’s website, nah.org.

Adelson, affectionately known as “Mr. A,” passed away after battling cancer in 1978.

Words of tribute in Adelson’s memory are prominently displayed on the site.

“If men live on through their deeds, the memory of Nathan Adelson will never fade,” the message stated. “He was a beloved, caring man who was a visionary and a dreamer. At the same time, he was a pragmatic, bottom-line oriented professional lauded for his business acumen. He was never satisfied with the way things were, only with how they could be.”

The agency’s Pahrump office is located at 2270 E. Commercial Road, Suites A and B.