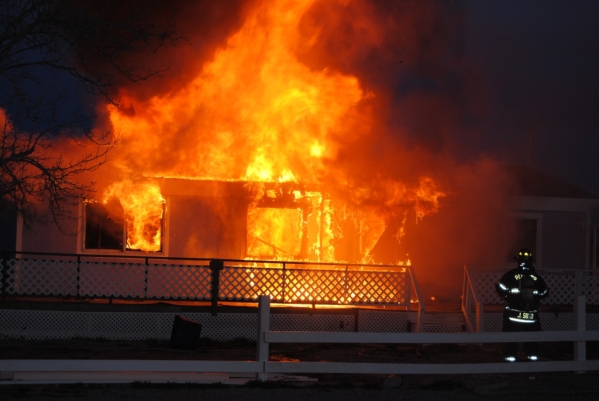 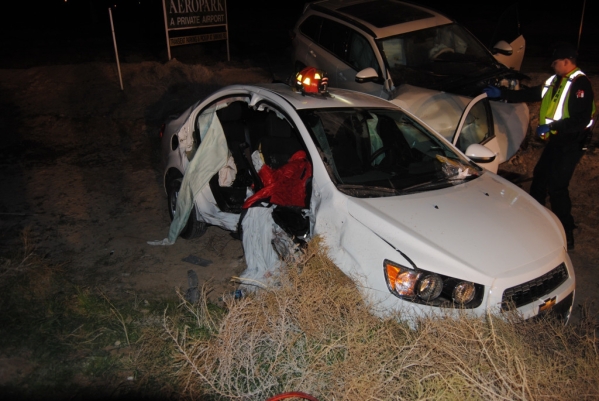 One person was medically evaluated following a structure fire that destroyed a home on the valley’s far west end of town on Thursday.

The initial investigation revealed the fire was intentionally set by a juvenile.

Pahrump Valley Fire and Rescue crews were dispatched to the home just after 5 p.m.

“We were dispatched for a report of a structure fire at 671 South Woodchips, where upon arrival, we found a double-wide manufactured dwelling with heavy fire showing in front of the home,” he said. “During the scene size-up, we found that there were numerous makeshift structures attached to it. We also learned there were multiple families living within the structure.”

Lewis said crews performed what’s known as a defensive exterior attack due to the sheer size of the fire.

“The crew made great progress and knocked down the main body of the fire within about 10 to 15 minutes,” Lewis said. “The fire was eventually placed under control at 5:48 p.m., after all the additional makeshift structures were closely examined for extensions. There was one civilian injury, who was a resident. They were evaluated for possible smoke inhalation and then released at the scene. He decided not to go to the hospital.”

Shortly after the fire was extinguished, Lewis said crews were summoned to the intersection of Highway 160 and Bell Vista Road at approximately 6:30 p.m.

“Upon Medic 5’s arrival, they found a T-bone type collision, with one person trapped inside the vehicle,” he said. “The assignment was upgraded to a motor vehicle rescue, adding additional resources, including an additional engine company, Mercy Air-21, along with myself and an additional medic. Crews completed the extrication by doing a full-door assembly removal. In other words, both the front and rear doors were removed in one shot on the passenger side. It was a significant T-bone type collision on the passenger side of the vehicle, with extensive intrusion into her side of the passenger compartment.The patient was extricated and patient care was transferred to Mercy Air-21 who arrived on scene. The injuries warranted the person to be transported to the trauma center.”

On Friday, fire crews were dispatched for a report of a motor vehicle collision at the intersection of Barney and Prospector, just before 8 a.m.

“We arrived on location and found there was no entrapment,” he said. “One person sustained an injury and they were transported to the local hospital.”

Later that evening, fire crews were summoned to a residence along the 4800 block of Bello Street for a suspicious fire just before 7 p.m.

“Upon the crew’s arrival, they found what appeared to be a small rubbish fire in the middle of the street that was intentionally set,” he said. “The initial investigation revealed that the fire was intentionally set and most likely juveniles were involved in that. The fire was extinguished without incident and there were no injuries.”

Fire crews had an early start on Sunday as they were dispatched for a mutual aid assignment in Inyo County on Highway 178 at mile marker 49 just after 1 a.m.

“Upon arrival crews found the rollover, however the occupant had left the area and crews were later called to the residence of that occupant to medically treat and transport the patient to the local hospital,” Lewis noted.