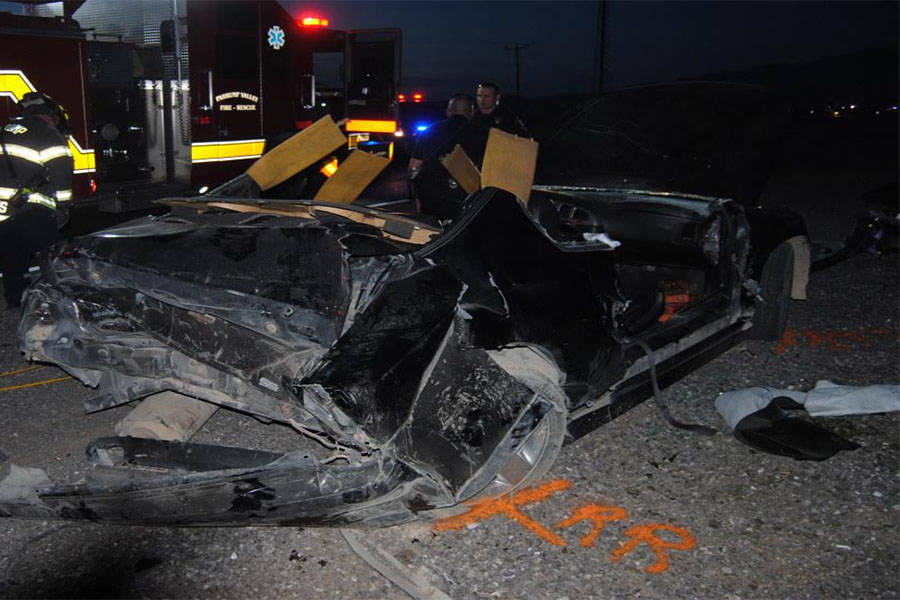 At least three people were transported to Desert View Hospital while one was flown to UMC Trauma following a two-vehicle collision on Highway 160, just south of Bell Vista Avenue on Thursday. Fire crews were forced to remove the roof on one vehicle to free the entrapped victim. Special to the Pahrump Valley Times 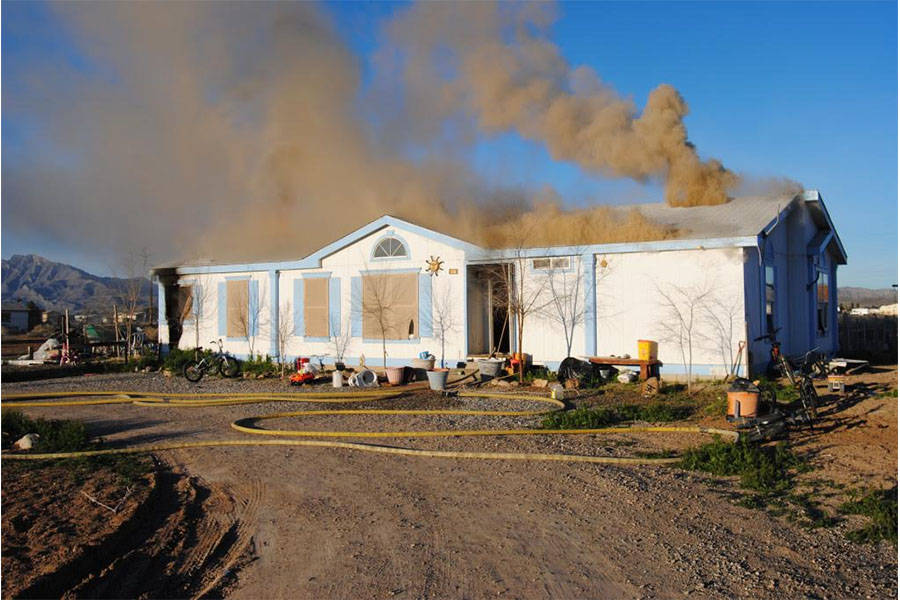 The Nevada State Fire Marshal’s office is investigating the cause of a structure fire on south Jewel Street last Wednesday morning. No injuries were reported, as all occupants were outside and accounted for upon the fire department’s arrival. Special to the Pahrump Valley Times

A series of fires and motor vehicle collisions greeted area first responders this past week.

“Crews commenced an interior attack through the front door, where they found a room and contents fire that was also up in the attic space,” Lewis said. “They hooked the ceiling and extinguished the fire with no further extensions. They completed primary and secondary searches of the dwelling and found that all occupants were outside and accounted for. The fire is under investigation by the Nevada State Fire Marshal’s office.”

On Thursday, first responders were summoned to Highway 160 just south of Bell Vista Street for a two-vehicle collision just after 5:30 p.m.

Lewis said crews were forced to remove the roof on one vehicle to reach the person entrapped.

“Upon arrival we found a two-vehicle accident with injuries,” he said. “A total of three patients were transported to Desert View Hospital, while one patient was flown by Mercy Air-21 to UMC Trauma in Las Vegas. It appeared that one vehicle was attempting to make a left hand turn into the Dollar General store parking lot and was rear-ended by an SUV.”

On Friday, fire crews were summoned to an early evening brush fire on the 200 block of east Calvary Street, as Lewis noted the valley is officially in brush fire season.

“Upon arrival, we found a grounds cover fire and while it was extending, it did not have an immediate exposure structure,” he said. “That fire was quickly controlled and it is unknown as to what sparked the fire.”

On Saturday, fire crews were dispatched to the 1900 block of Bruce Street for a reported vehicle fire.

Lewis said upon arrival, crews found a vehicle approximately 25 feet away from a structure.

“The fire originated in the engine compartment of that vehicle and extended to the passenger compartment,” he said. “The fire was quickly controlled with no extensions and there were no injuries. We believe the cause of the fire was mechanical in nature.”

The following day, fire crews were dispatched to a residence on the 600 block of San Lorenzo Street just after 1 a.m., where crews found a mostly extinguished kitchen fire inside the home.

“Crews completed primary and secondary searches of the residence to assure that all occupants were accounted for with no injuries,” he said. “They also checked for extensions and found none. The fire was held to the area of the kitchen.”

Later that evening, crews were dispatched to a single-vehicle rollover crash just before 7 a.m.

The accident occurred on Highway 160 at approximately mile marker 4, in the area of Spring Mountain raceway, where crews performed what’s termed a positional extrication.

“Upon arrival we found an SUV resting on its roof with the occupant entrapped inside,” he said. “Crews recovered that patient by removing materials that were blocking the doors of the vehicle. They successfully extricated that patient within several minutes after arrival. That patient was transported to the local hospital.”

On Monday, crews responded to a three-vehicle crash on Highway 160 at Irene Street.

“Upon arrival, we found an injury motor vehicle accident involving three vehicles, which were two pickup trucks and a semi truck,” Lewis said. “While there was no entrapment, there were several that were injured, however only one requested transport to the local hospital.”

Lewis also issued a reminder to local residents regarding an annual event coming to town on Saturday, March 25.

“We are also gauging next week, which is the Baker to Vegas run,” he said. “We are preparing for that and we’re also keeping in mind the construction work on Highway 372 and asking motorists to avoid that area between the hours of 3 p.m. and 9 p.m., if possible due to the traffic associated with the chase teams for the runners, coupled with the construction that’s on going there.”