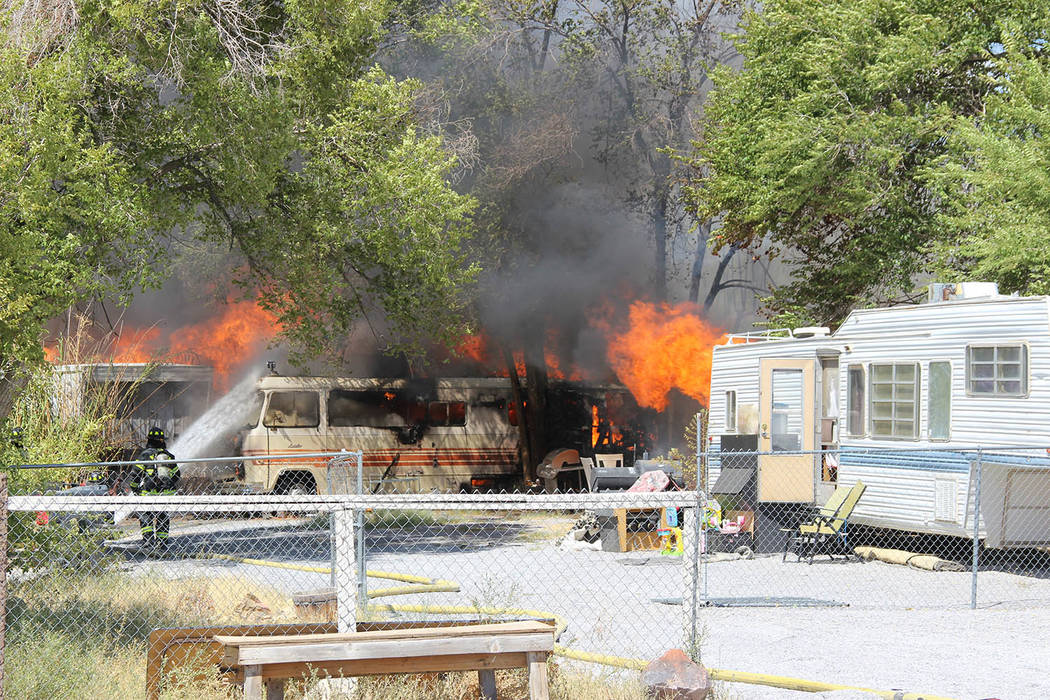 Special to the Pahrump Valley Times More than six hours after the 2 p.m. structure fire began, Pahrump fire crews had extinguished the blaze which destroyed, five structures on Tuesday August 21. Though no serious injuries were sustained by citizens, at least two pets perished in the flames of a motorhome on the property, along the 900 block of Wilson Road. 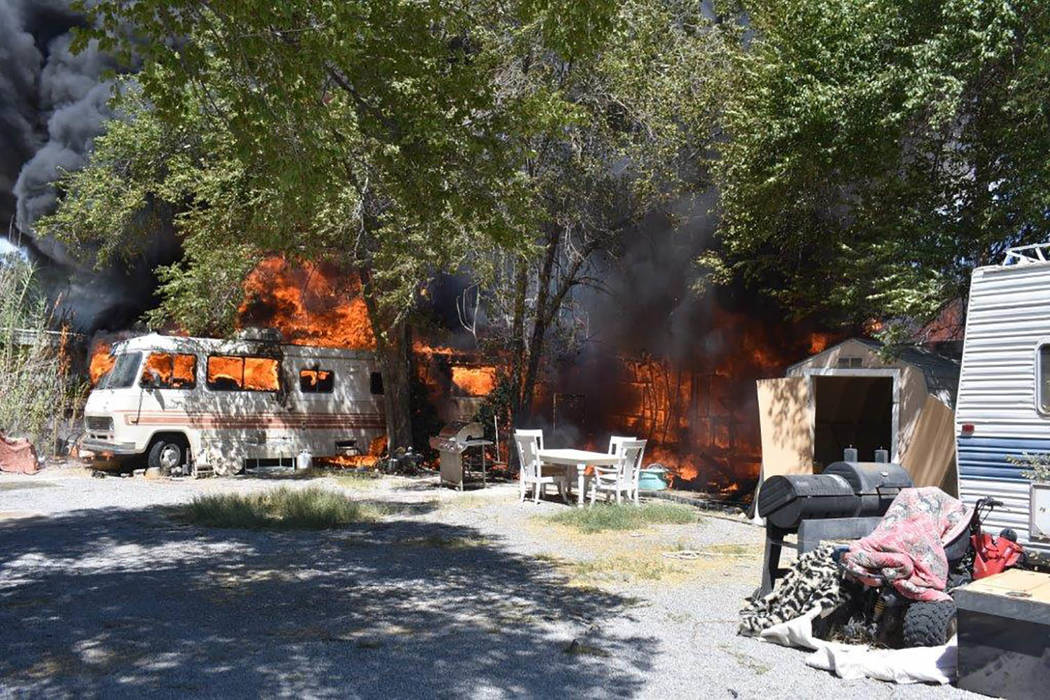 Special to the Pahrump Valley Times As crews were working to extinguish Tuesday's structure fire, Chief Lewis said crews were forced to be aware of additional life-threatening perils on the fire grounds, including as exploding propane tanks and canisters, along with discharging ammunition. 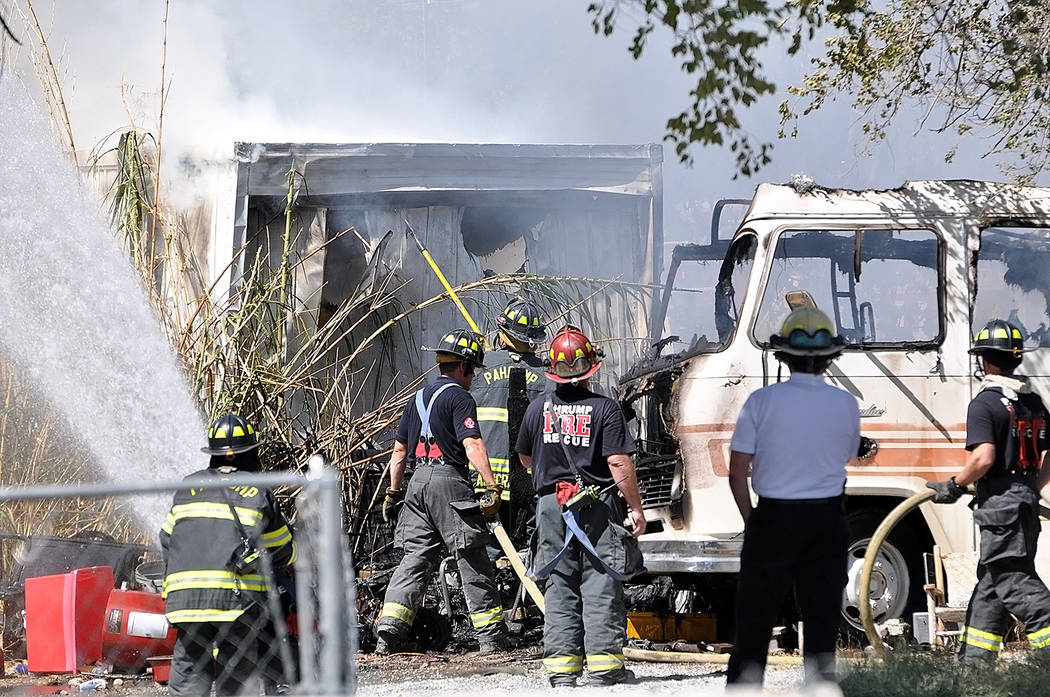 Horace Langford Jr./Pahrump Valley Times While fire crews were still working the Wilson Road structure fire, Chief Scott Lewis also noted that the department was inundated with additional service throughout the afternoon, as just after 4 p.m., crews were summoned to Gold Town Casino on Highway 160 for a kitchen fire. 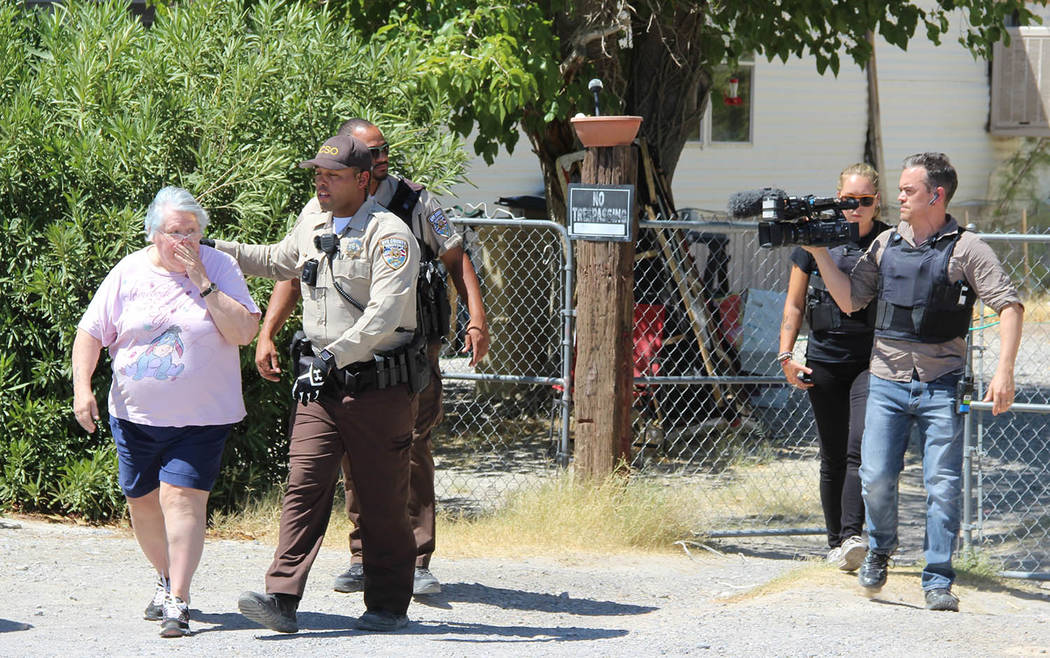 Charles Hoover/Special to the Pahrump Valley Times Nye County Sheriff's Deputies escort a resident to safety from the fire grounds. Fire Chief Scott Lewis said though the exact cause of the fire is under investigation, it's likely an aged tree branch dislodged and came into contact with an energized power line on the property, sparking the blaze, on Tuesday, August 21. Much of the incident was captured by Live PD camera crews.

An “all hands” response was declared by Pahrump Fire and Rescue Chief Scott Lewis after an early afternoon fire broke out on a multi-residential property on the 900 block of Wilson Road this week.

More than six hours later, after the 2 p.m. Tuesday dispatch, five structures were destroyed, four of which were occupied.

Though no serious injuries were sustained by citizens, at least two pets perished in the flames of a motorhome on the property.

Though the exact cause of the fire is under investigation, Lewis said it’s likely an aged tree branch dislodged and came into contact with an energized power line on the property, sparking the blaze, on Tuesday, August 21.

“As we were responding, we saw a huge plume of black smoke developing just south of Station One, so we knew we were going to work,” Lewis said. “We knew there were structures involved but we just didn’t know the extent. As crews responded, we were notified that in fact, several structures were well involved and that there were also at least two injured, which occurred early on in the incident.”

Once on scene, Lewis noted the heavily-wooded property contained numerous residences consisting mainly of travel trailers and a motorhome.

“We made a quick determination that the immediate exposures were located along the next street due north, which is Short Street,” Lewis said. “We had a visual on several closely located structures that were right along the fence line. Separating that fence line was bamboo and other natural fuels, including high grass. With those heavy fuels and windswept conditions, along with the close proximity of those exposure structures, we were looking at a multiple structure incident.”

Lewis also said crews were fortunate to have had fire hydrants in the immediate area, along both Short Street and Wilson Road.

The crews used five-inch supply lines, that are large-diameter lines, which were able to supply the Engine One.

“The hydrants gave us the ability to put big water down on the fire in a short amount of time,” he said. “We deployed our resources in two divisions, where one division was handling Wilson Road and the second division was handling the Short Street exposures. Crews made quick progress in short fashion despite the windswept conditions. They did a great job and they were able to hold the fire to where we found it with no further extensions to the other nearby structures.”

Additionally, Lewis noted that the hydrants and large water lines prevented other structures on the property from being consumed by the raging flames.

“There was one structure within feet of the flames that crews protected, and the same situation occurred on the Short Street side. There were primary residential dwellings that were in very close proximity and they were all protected, even though at one point, there was a threat that it would cross over Short Street and go down to Long Street.”

As crews were working to extinguish the fire, Lewis said they were forced to be aware of additional life-threatening perils on the fire grounds, including exploding propane tanks and canisters.

“There was also ammunition being discharged,” he said. “There were several challenges and it was a very high-risk event. That’s why we took a very cautious position with a defensive exterior attack with big water in a short amount of time.”

As fire crews were battling the flames, the decision was made to evacuate residents from the immediate area, including officials at the Nye County School District offices, at Wilson Road and West Street, just a short distance away from the fire grounds.

Out of danger/help is on the way

Those evacuees were directed to the NyE Communities Coalition’s multi-purpose facility, according to Executive Director Stacy Smith.

During that time the American Red Cross of Nevada was contacted to help the families and individuals with temporary housing.

“Cameron McRae from the school district called me and asked the family members from the fire grounds to come over and stay in the multi-purpose room, and we immediately said yes,” Smith said. We provided them with some snacks and water. The school district also evacuated about eight to 10 school district employees who came over here in addition to the families. I think our final count was about 19 people who were evacuated and took shelter inside our multi-purpose room. I helped the Fire Chief Scott Lewis get the names and the number of people and animals that were evacuated and came by for shelter.”

Lewis, meanwhile, spoke of additional challenges associated with fighting Tuesday’s structure fire, as the Community Christian Academy, which is a small private school, is located roughly 100 yards east of the fire grounds.

He noted that classes were about to be dismissed as fire crews were in the heat of battling the fire.

“We had to work out an immediate plan where the sheriff’s office took charge of that to ensure that a traffic lane was developed to get the parents in and out to get their students safely without interfering with fire operations as well as not exposing the kids to any of the smoke. We also had to make sure that all of the initial patients were medically assessed. All refused transport from the scene.”

While fire crews were still working the structure fire, Lewis also noted that the department was inundated with additional service calls throughout the afternoon, as just after 4 p.m., crews were summoned to Gold Town Casino on Highway 160 for a kitchen fire.

“We broke free several of our resources and responded,” Lewis said. “We found that the kitchen fire was extinguished just prior to our arrival. We did a complete ventilation process, checked for injuries and of course documented that incident. There were multiple EMS calls and other reports of smoke conditions in the valley, but there was no cessation of service whatsoever in the community. There were three structure fires that occurred on Tuesday alone.”