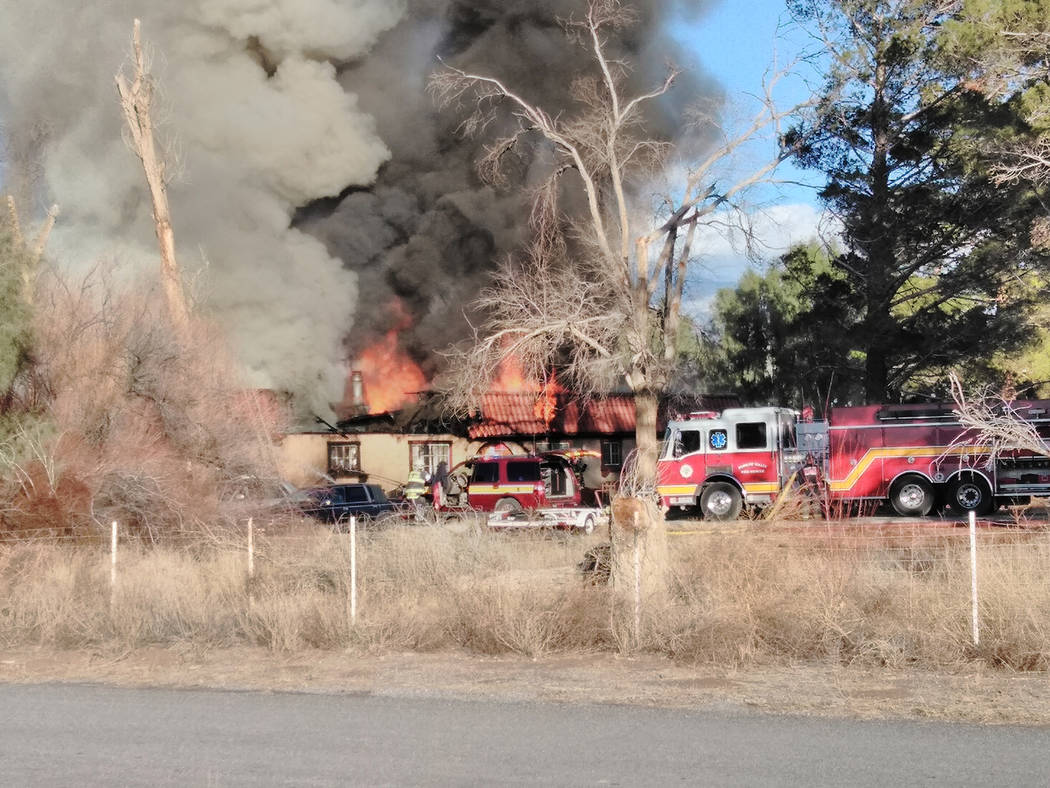 Selwyn Harris/Pahrump Valley Times All occupants were evacuated during the start of a structure fire at the intersection of Manse Road and Whirlwind Avenue just before 3 p.m., on Wednesday afternoon. No injuries were reported but the home sustained very severe damages as a result of the fire. The exact cause is under investigation. 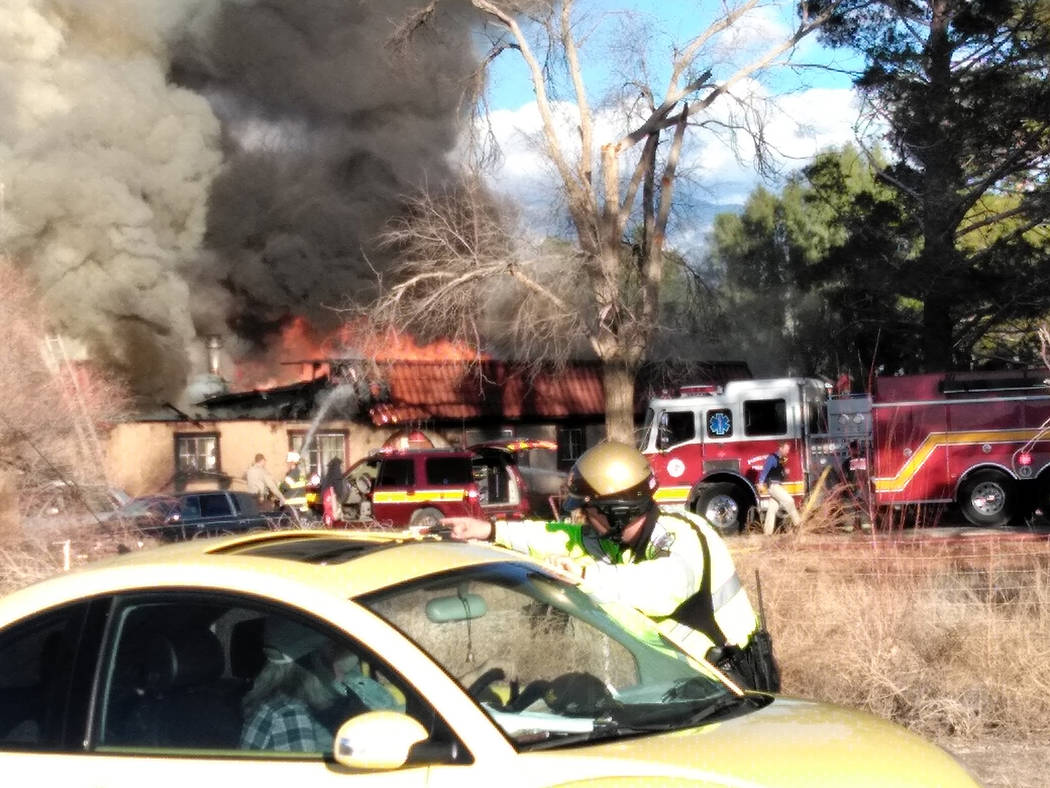 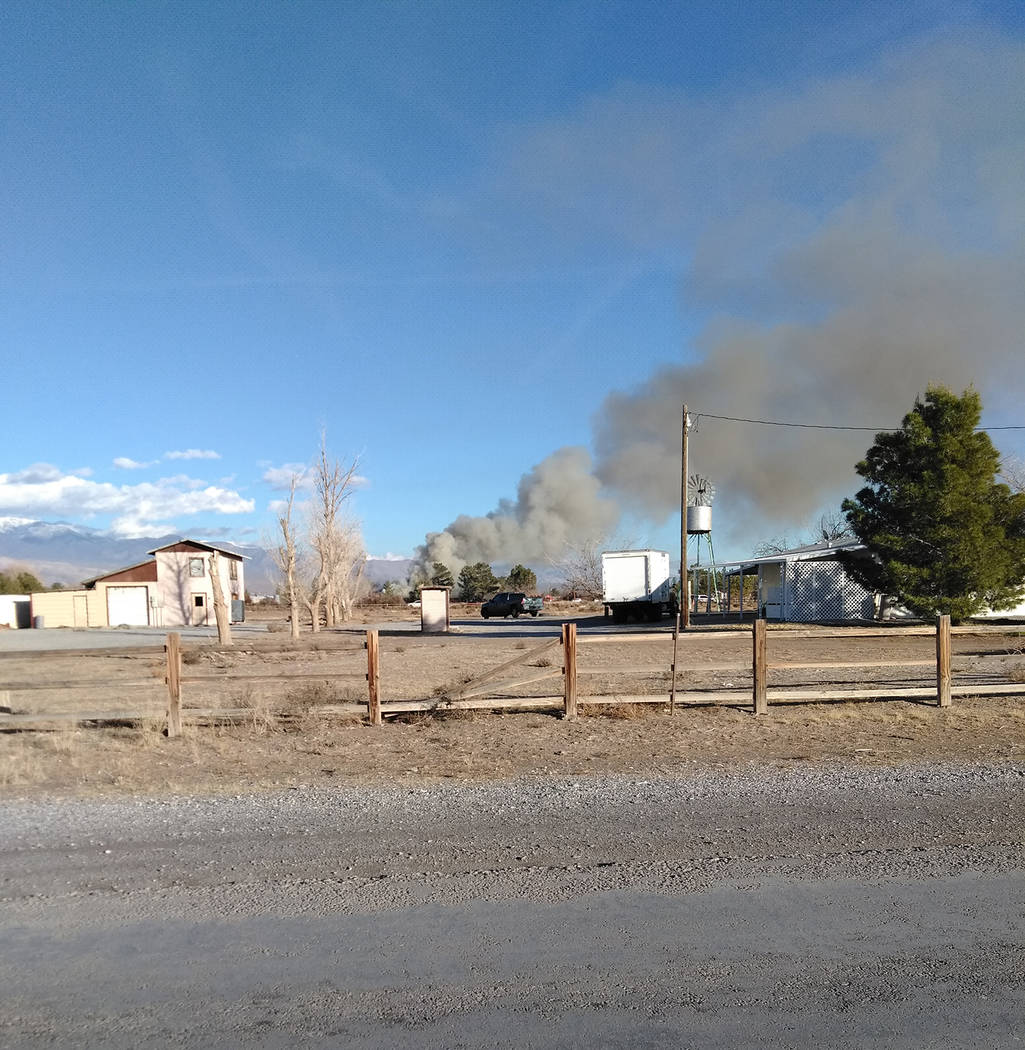 Selwyn Harris/Pahrump Valley Times Thick black smoke could be seen throughout the Pahrump Valley, indicating a working structure fire. According to Nye County dispatchers and fire crews, oxygen tanks within the home were exploding from the intense heat. Nye County Animal Control officers were also summoned to remove several animals from the property.

Pahrump Valley Fire and Rescue Service crews responded to a structure fire at the intersection of Manse Road and Whirlwind Avenue just before 3 p.m., on Wednesday, Jan. 10.

All occupants were evacuated safely, as Pahrump Valley Fire and Rescue Chief Scott Lewis issued an “all hands” response to off-duty firefighters.

Lewis noted that Nye County Animal Control officials were summoned and also responded to the fire.

There were several cats and a dog that were saved and accounted for,” Lewis said. “However, we think that a pet bird and a miniature pet possum were lost.”

Lewis also said that at least one firefighter, identified as Capt. Steve Moody, sustained minor injuries after ceiling materials began collapsing within the interior of the structure shortly after crews arrived on scene and began engaging the fire.

Moody was back on duty at Fire Station One bright and early on Thursday morning.

“It was a large piece of stucco, that probably weighed about 75 to 100 pounds,” Moody said. “It fell on my helmet and kind of tweaked my neck a little bit. I’m OK though.”

Motorists traveling along the streets near the fire grounds actually pulled their vehicles over to stop and observe, as thick black smoke could be seen billowing from the large stick-built home from all parts of the valley, as fire crews fought to control the blaze.

According to Nye County dispatchers and fire crews on scene, oxygen tanks within the home were also exploding, due to the intense heat.

Members of Nye County Sheriff’s Auxiliary blocked off streets in the area limiting access to emergency vehicles only.

Check for more details upcoming in the Pahrump Valley Times.