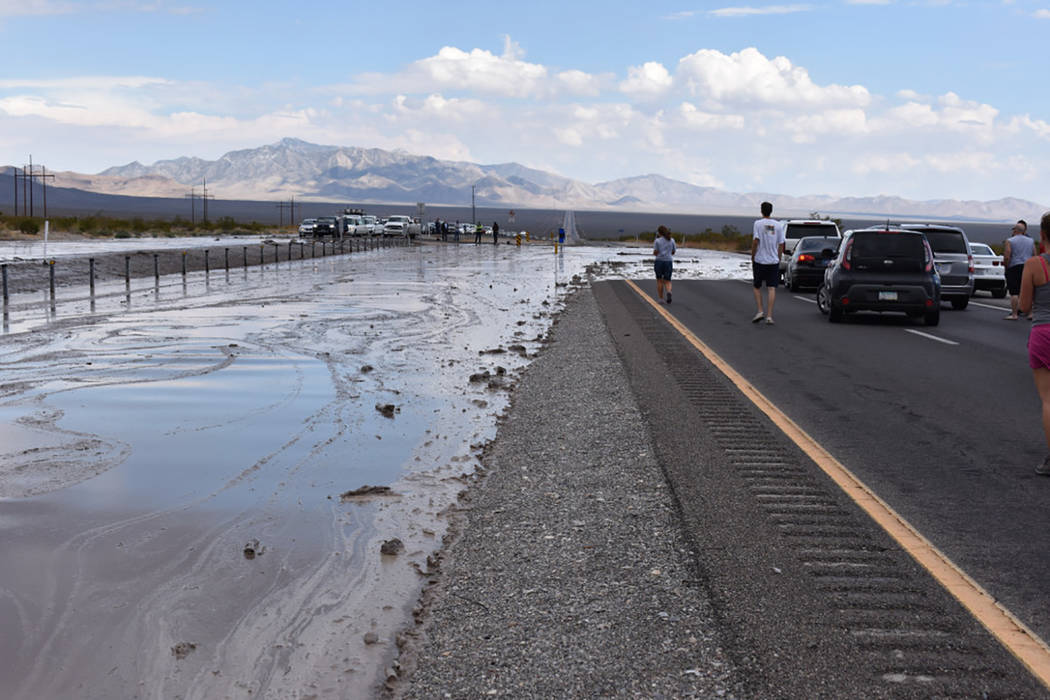 Special to the Pahrump Valley Times Last week’s thunderstorms created challenges for area emergency crews and commuters along Highway 160 in both directions, as several areas of the highway had flood waters and debris crossing over in the north and southbound travel lanes of the roadway. The began subsiding in roughly one hour. 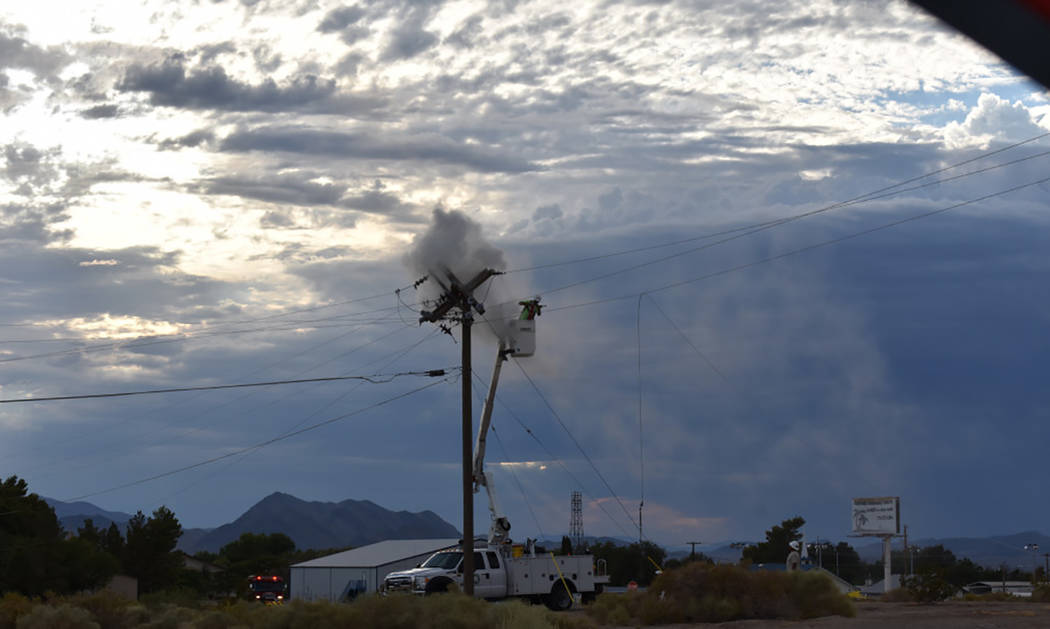 Special to the Pahrump Valley Times Local crews were dispatched to the area of East and First Streets for a downed power line last Wednesday August 2, causing a series of electrical arcs. Fire crews maintained a safe distance while blocking off all areas to the scene pending the arrival of Valley Electric Association crews. 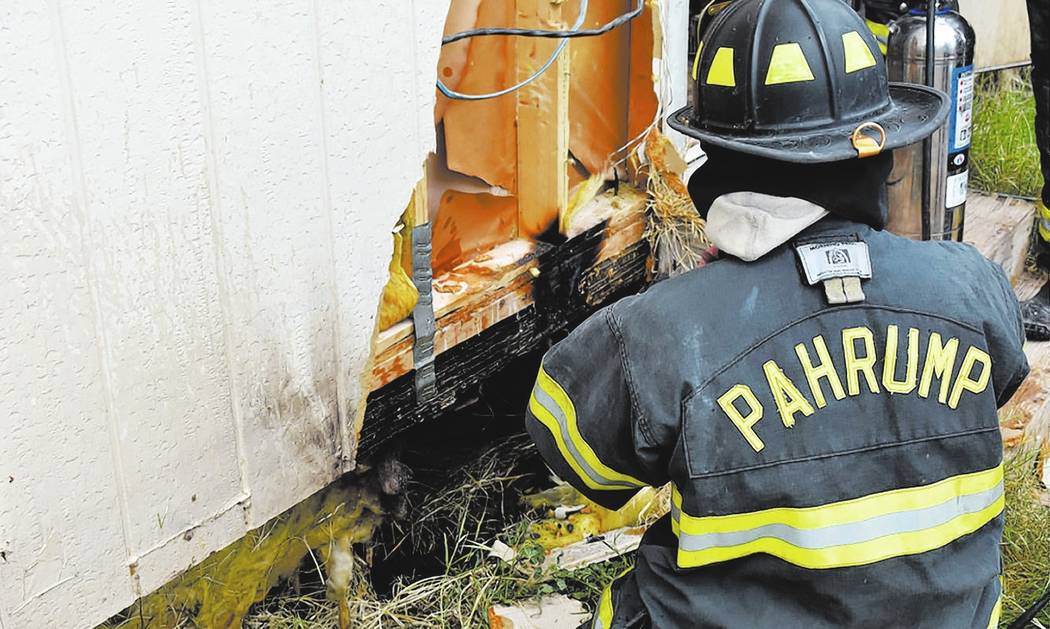 Special to the Pahrump Valley Times Pahrump fire crews were dispatched to the 6300 block of Vicki Ann Street for a structure fire on Tuesday August 1, just before 1 p.m. Crews investigated and found what appeared to be an electrical fire in a wall of the home, which extended approximately four feet beneath the structure. Crews accessed the area and immediately extinguished the fire with no extensions.

Brush and structure fires, along with a series of motor vehicle collisions, challenged local fire crews over the past week.

Pahrump Valley Fire and Rescue Services Chief Scott Lewis said crews were dispatched to the 6300 block of Vicki Ann Street for a structure fire just before 1 p.m on Tuesday, Aug. 1.

“Upon arrival, we found a small one-story singlewide manufactured dwelling at the rear of the property with white smoke showing from an exterior wall,” Lewis said. “Crews investigated and found what appeared to be an electrical fire in said wall that had extended approximately four feet underneath the structure. Crews accessed the area and immediately extinguished the fire with no extensions.”

Later that day fire crews were summoned to the desert area behind the Pahrump Nugget resort for a brush fire at 5:45 p.m.

“Upon arrival, we found a slow-moving grounds cover fire next to a power pole,” Lewis said. “It appeared that a crow had come in contact with the energized power lines, which precipitated the brush fire. As a result, the crow died.”

On Wednesday, Aug. 2, fire crews were dispatched to the area of West Wilson Road near Woodchips Road at 5:28 p.m., for a reported fight in progress.

“Crews were initially placed in staging and were quickly moved up where it was found that five people were injured as a result of a domestic fight that occurred on the street,” Lewis said. “At least one person was transported to Desert View Hospital and the other patient was flown via Mercy Air 21 to UMC Trauma in Las Vegas for a significant head injury.”

Roughly a half-hour later, crews were dispatched to the area of East and First streets for a downed power line.

“Upon arrival, crews found a power line that had disconnected from a nearby power pole which then draped across other power lines and created a series of arcs, during which time, the top support of a secondary power pole fractured and was compromised and began to fall onto the additional power lines creating another series of arcing,” Lewis noted. “It was a highly dynamic incident and very theatrical as far as the types of arcs and the noise produced by said arcs.”

“The second power pole that was compromised, also caught fire at the top of the pole,” Lewis noted. “Valley Electric Association crews utilized dry chemicals to extinguish that fire. This incident was most likely related to the weather as there were a series of thunderstorms moving through the area at that time. Shortly thereafter, we will be dispatched back to the area where Valley Electric crews were still working on those power poles when the power pole had re-ignited. We were asked to be on standby while they completed their work.”

On Monday, at 8 p.m., emergency crews were dispatched to the 900 block of South Linda Street at the Horizon Market for a motor vehicle versus pedestrian accident, where upon arrival, crews found the accident as reported. That patient was transported to the local hospital.

On Thursday, Aug. 3, fire crews were dispatched to the area of West Hickory Street at Red Rock Drive for an injury motor vehicle accident which occurred just before 8 p.m.

“Upon arrival, we found a one-vehicle rollover with the vehicle resting on its side,” Lewis said. “The vehicle was an off-road style vehicle with a roll cage. The patient, who had self-extricated, was then assessed, treated and transported to the local hospital.”

Last week’s thunderstorms created challenges for both area emergency crews and commuters along Highway 160 in both directions just before 4 p.m., Lewis said.

Lewis noted that traffic was stopped in both directions for approximately one hour when the floodwaters started to subside, allowing commuters to continue along one lane in each direction.

“The road was cleared by Nevada Department of Transportation crews as well as resources from the Nye County Road Department,” Lewis said. “There were no injuries that we were aware of. Due to the weather, Mercy Air was not flying so we had to just work around it. They got the road open so it did not impede patient care at all.”

On Sunday, Aug. 6 just before 7 p.m., crews were summoned for a reported vehicle fire, along Simkins Road, roughly four miles east of Highway 160.

“Upon arrival, we found an off-road style vehicle that was well involved in fire,” Lewis said. “There were no immediate exposures. Crews suppressed that fire in quick fashion. They were also informed of a minor injury sustained to one of the occupants of that vehicle who had left the area prior to our arrival.”