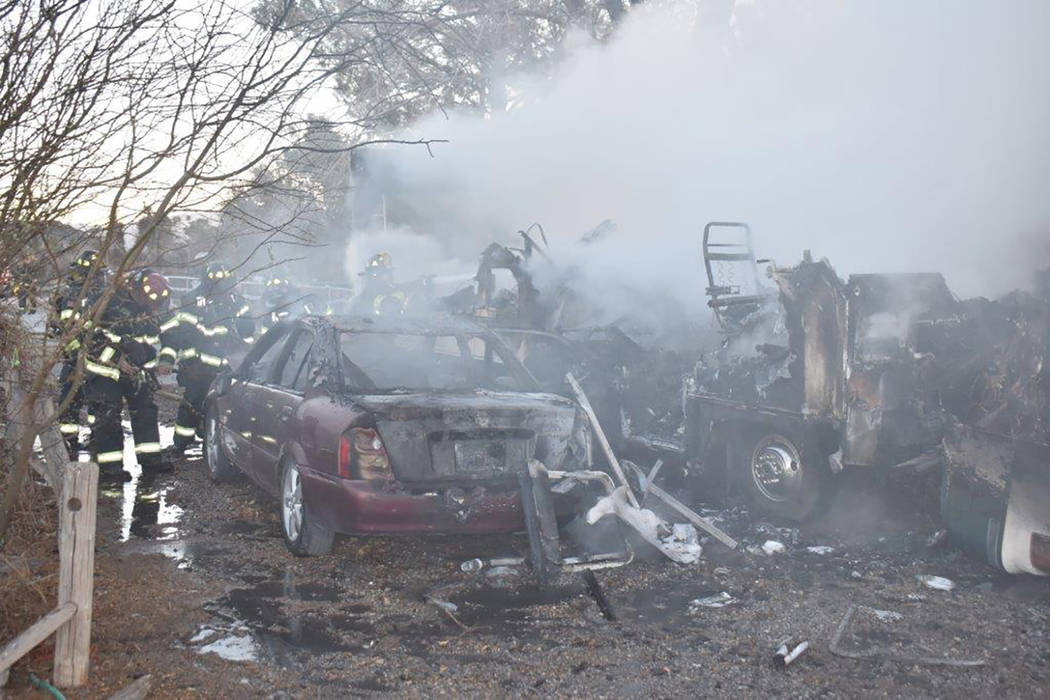 Special to the Pahrump Valley Times Pahrump fire crews were dispatched to a residence along Blosser Ranch Road, on Christmas Eve for a reported motorhome fire just before 5:30 p.m. Though the motorhome and and adjacent passenger vehicle were destroyed, crews managed to extinguish the blaze before it extended to the primary residence on the property. 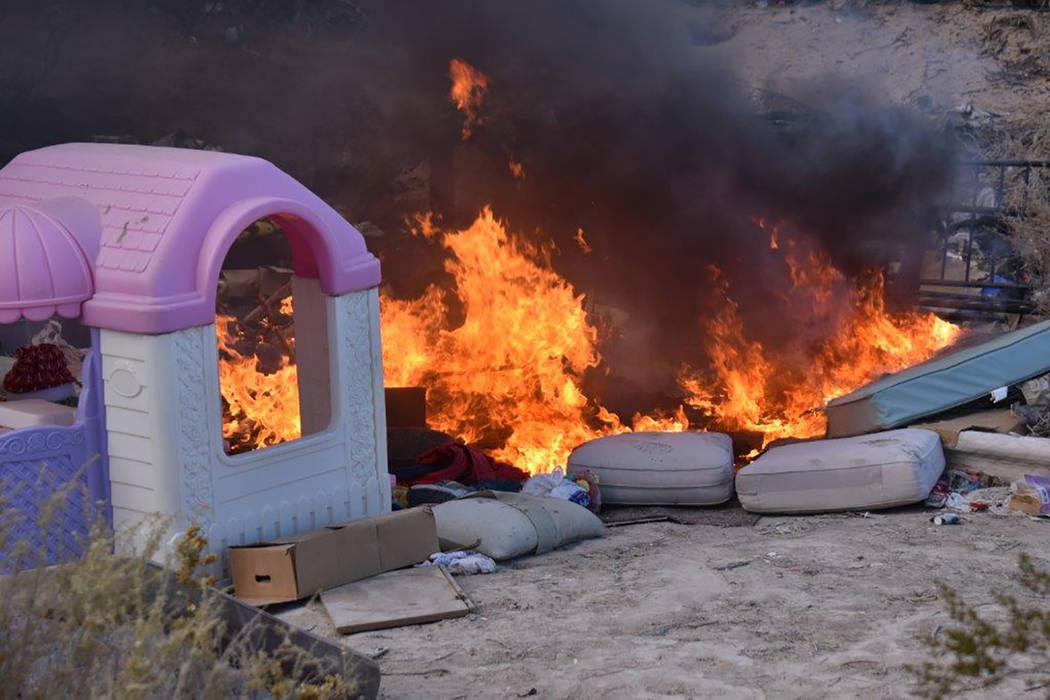 Special to the Pahrump Valley Times On New Year’s Eve, fire crews were summoned twice, at 7:59 and 8:40 a.m. for a rubbish fire near the Salvation Army business along Dahlia Street. Fire crews managed to quickly control the fire with no extension to the nearby commercial structures. One person in the area was questioned, but declined any knowledge of the incidents, according to Fire Chief Scott Lewis. No injuries were reported. 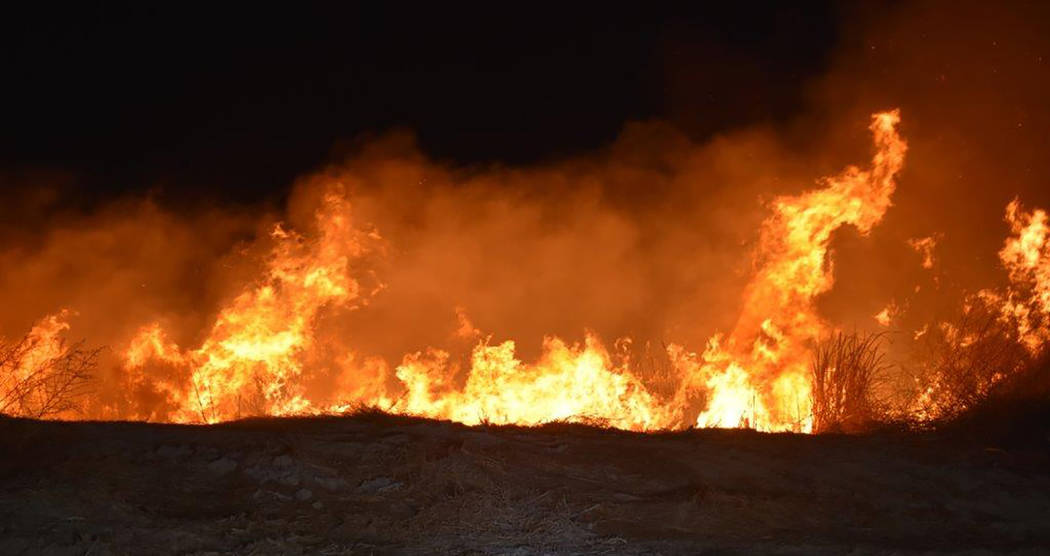 Special to the Pahrump Valley Times Pahrump fire crews were dispatched to the area of Gamebird Road and Malibou Street early Friday morning December 28, for a reported wind swept brush fire just before 2 a.m. Fire Chief Scott Lewis said the fire was quickly controlled without extending to a nearby housing development. The cause of the fire remains under investigation. No injuries were reported.

The holiday season made for a very busy workload for area first responders going into the new year.

“There were initial concerns that there was discharging ammunition within the structure, and it was also relayed that there may have been a dog bite that occurred on the property,” Lewis said. “We arrived on location and found a fully-involved motorhome, which was actually used as a fixed structure. An automobile, which was closely parked next to the motorhome was also involved in fire. The primary residence was protected by crews shortly after their arrival on location.”

Lewis also said crews quickly got control of the fire and extinguished it within roughly 20 minutes after their arrival.

“The dog bite was unrelated to the fire,” he noted. “It was a neighbor who had approached the scene to assist and was bit on the boot. We believe the cause of the fire was most likely electrical in origin as it was attached through extension cords to the primary dwelling. The motorhome was mostly consumed.”

On Dec. 26, fire crews were summoned to Oakridge Avenue for a structure fire just before 1 a.m.

“Station 3 was first on location within minutes of the dispatch,” Lewis said. “They found fire and smoke showing from what we call the “C” side, which is the rear of the building. The fire was on the underside, which was consistent with the initial report. Our crews came in and removed the skirting around that particular area and there was no further extension.”

Lewis went on to say that damage to the single-wide manufactured dwelling was held to the underside of the structure.

“The firefighters did a great job and got the fire extinguished in such short fashion,” he noted. “There was no real damage to the structure, and the cause of the fire is under investigation.”

Early Friday morning, Dec. 28, fire crews were dispatched to the area of Gamebird Road and Malibou Avenue for a reported brush fire just before 2 a.m.

“Upon arrival, we found a fast-moving windswept grass fire with a significant advancement,” Lewis said. “There were no immediate structures, and that fire was quickly controlled without going into the nearby development. There were no injuries and the cause of the fire remains under investigation.”

Later on Friday morning, crews responded to the 3700 block of Dyer Court for yet another reported structure fire.

“Crews arrived on location and found nothing showing from the exterior, however a closer inspection of the interior revealed a fire traveling within the attic space from the front of the double-wide manufactured dwelling, to the rear,” he said. “Crews commenced an interior attack, offensive strategy, where they hooked the ceilings and controlled the advancing fire with no further extension. There were no injuries. It appeared that the fire had a significant start, due to it being undetected. The investigation revealed the apparent culprit was the incorrect installation of a wood-burning stove.”

“We received a land line telephone call requesting assistance for a cat that was on top of a tree, and had been there for several days,” Lewis said. “The nearby residents were deeply concerned, therefore the fire department responded. We placed a ladder against the tree and successfully rescued the cat without incident. The cat suffered no injuries.”

On New Year’s Eve, fire crews were summoned twice, at 7:59 and 8:40 a.m. for a rubbish fire near the Salvation Army business along Dahlia Street.

“Upon arrival, we found what what appear to be the remnants of a homeless camp where the fire was extending to the nearby brush,” Lewis said “The area was fully-involved. Crews came in and quickly controlled the fire with no extension to the nearby commercial structures. One person in the area was questioned, but declined any knowledge of the incident. That fire was quickly extinguished with no injuries reported.”