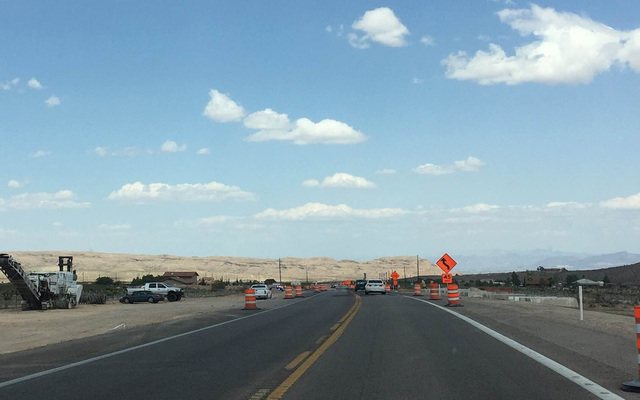 Prep work for the ongoing widening project on the main road between Las Vegas and Pahrump could cause delays for motorists who drive the stretch of road during the overnight and early morning hours.

The Nevada Department of Transportation is restricting State Route 160 in Clark County to one lane in each direction for mill and paving operations, 9 p.m. until 5 a.m., starting last night, and continuing May 25, May 31, June 1 and June 2.

A flagger operation will be in place, which could result in up to 30-minute travel delays. Work will begin at the State Route 159/Red Rock Road intersection and move west toward mile marker 14.

Traffic restrictions are needed as part of the $16.5 million, 5-mile-long highway widening from two lanes to four travel lanes between SR-159 and mile marker 16.63.

Other work calls for flattening side slope shoulders for safer vehicle turnouts, plus installing new drainage pipe, placing guardrails and hydro-seeding 38 acres. The project, whom Aggregate Industries-SWR Inc. is the general contractor for, is scheduled for completion in early 2017.

“The department, in order to minimize commuter inconvenience, is prioritizing completion of the project’s first mile west from the Red Rock Canyon Road junction due to the numerous homes and driveways tying into State Route 160,” said Tony Illia, NDOT spokesperson. “Paving work consequently is occurring on one half of the road while traffic is being shifted to the other side. As a result, the first mile of the fully-widened four-lane highway will open to the public during the first week of June.”

Motorists should use caution while traveling through the work zone, heed construction signage and take alternate routes, if possible, according to NDOT. For current road information go to: nvroads.com.