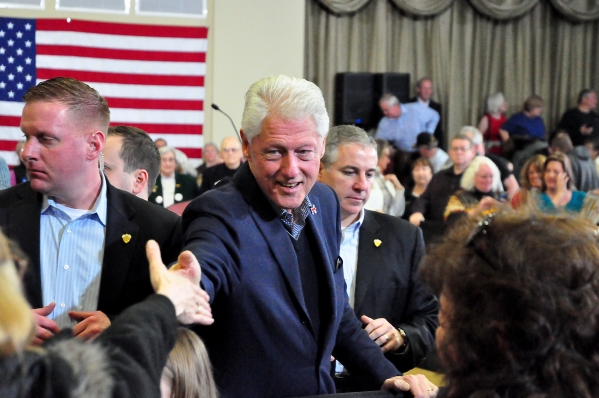 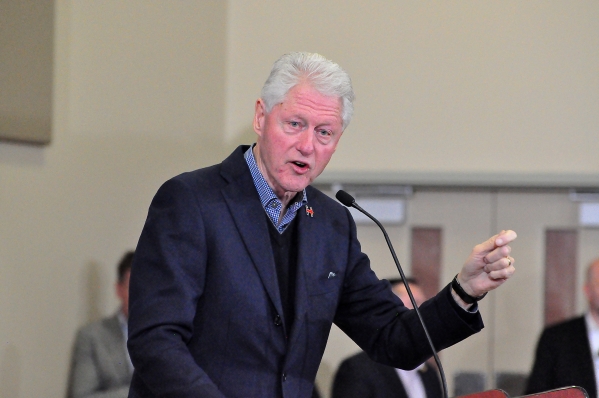 Clinton rallied support for Hillary Clinton, talking about her vision for America and lauding her past accomplishments, including the Arkansas education reforms in the 1980s and participation in the recent Iran nuclear deal.

“I think that Hillary will be the best president for a lot of reasons, but first, I think she has got the right vision,” Clinton told the enthusiastic crowd at the opening of his first speech in Nye County.

“She is the only person who spent a lifetime trying to give us inclusive economics and inclusive social policies, who’s also the best prepared to defend us in a dangerous world and preserve the national security and do it in a way that is inclusive.”

The stop came two weeks before the Nevada Democratic caucus on Feb. 20. Hillary Clinton, a former secretary of state, won the Iowa caucus by a razor-narrow margin after she was locked in a virtual tie with Vermont Sen. Bernie Sanders, who has been mounting a serious challenge for her campaign.

Speaking about apprehension and anxiety in both parties, Clinton said that most Americans “don’t feel the positive changes yet.”

He traced back to his presidency and said that half the American people after inflation still live on what they were living on the last day of his presidency. Clinton then called “restoration of broad-base prosperity and reduction of inequality by lifting everybody” the most important things to do.

“So, here we are, having produced terrific new jobs, but most people haven’t gotten a raise,” he said. “So the question for the Democrats is who’s got the best plans for the future and who is strong enough to win the general election, and most important of all, who is in for you, who will be the best president to lift all of us so we can all grow together.”

The event was part of the Clinton’s two-day visit to southern Nevada ahead of the New Hampshire primary. He also made a stop in Las Vegas on Friday at the United Brotherhood of Carpenters International Training Center.

The Clinton campaign in Nevada made an announcement days before the event. Some volunteers from the Clinton headquarters in Pahrump said they made over 1,000 calls to alert people to the visit.

Lamenting the political gridlock in Washington, D.C., Clinton praised the Affordable Care Act and the Dodd-Frank Wall Street Reform and Consumer Protection Act and encouraged to build on Obama’s legacy.

“We can do this, we can grow together, we can share the future together. People can be rewarded for work again, we just have to update what we did to the 21st century. I think President Obama deserves a lot of credit for doing what he did with one hand tied behind his back because a lot of the people that elected him in 2008 didn’t show up in 2010, that’s our fault,” he said.

Without directly mentioning Sanders’ name, Clinton said he understands the frustration about the lack of opportunities that many young millennials have.

Polls show that Clinton fares well among those whose age is 45 and above while Sanders is overwhelmingly more popular among voters from 18 to 30 years old. Hours before the start of the New Hampshire primary, Sanders had a wide lead over Clinton, according to the CNN/WMUR tracking poll.

“Look, I understand why we’ve got a race on our hands because a lot of people are disillusioned with the system, a lot of young people want to take it down. I saw a survey the other day that said that some enormous percentage of millennials start looking for another job within 20 days of the one they had.”

Clinton also called to reaching to those “in disagreement” and said that America should have “inclusive politics, inclusive social policies, inclusive economics and inclusive financial security policy” instead of demonizing the Muslims and other groups.

“But we’ve got to be smart, we’ve got to do this together,” he said. “You should make sure that Nevada says, ‘We want a change maker.’ She is the best one I’ve ever saw.”