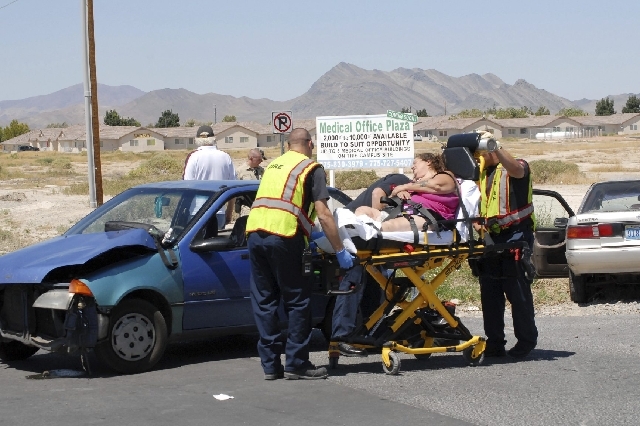 Two people were sent to the local hospital this week following a two-vehicle collision at the intersection of Lola Lane and Wilson Road.

Pahrump Valley Fire Rescue Services and the Nye County Sheriff’s Office were both asked to respond to the scene where four people were reportedly injured.

When crews arrived at the location, the Sentra could be seen in a ditch on the side of the road. The Metro, although still on the roadway, was in the middle of the intersection with noticeable damage its front end.

Fire Chief Scott Lewis said four people were injured in the accident, however, only two of the injured patients opted to be taken to Desert View Hospital for treatment.

“We had a two-vehicle accident with a total of four people injured, however, only two needed transport from the scene,” he said. “One had what we deemed to be a medical requirement to extract the person out of the vehicle.”

Debris from the impact of the two cars, including glass and a bumper from each of the vehicles, could be seen lying in the roadway when first responders arrived on scene.

The intersection of Lola Lane and Wilson Road was shut down for a brief period of time as a sheriff’s deputy conducted an investigation into the incident and medics worked to assess and treat the patients at the scene.