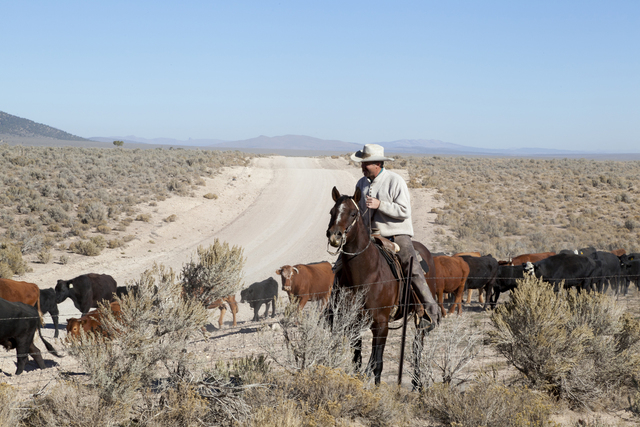 State Sen. Pete Goicoechea, R-Eureka, would seem to be uniquely qualified to give a perspective on the recent gather of rancher Cliven Bundy’s cattle in northeastern Clark County. Besides years of experience as a state legislator, he’s a third generation Basque rancher who manages more than 700 head of cattle in Central Nevada.

Goicoechea said the federal government needed to reimburse Bundy for the desert tortoise and called the way the gather was conducted “martial law.”

Goicoechea said he tried to help referee the dispute with Gov. Brian Sandoval, who was in contact with the White House and new Secretary of the Interior Sally Jewell.

“The governor was very engaged first and foremost, trying to get the federal agencies to stand down on that because I think that came very close to being a very dangerous situation and we’re lucky we got out of there without somebody getting shot,” Goicoechea said.

But while the U.S. Bureau of Land Management claims Bundy owes over $1 million in grazing fees since he stopped paying them out of protest in 1993, Goicoechea sided with Bundy on one issue.

“Clearly in 1993 when they suspended his grazing permit, in lieu of the desert tortoise, he wasn’t compensated for that. In fact I’m not sure any of those permittees down there were truly compensated for what they had to give up,” Goicoechea said. “Only one of those 54 permits is still out there and he (Bundy) is there illegally, but the bottom line is that was all for the desert tortoise and technically it’s only a threatened species.”

“Clearly I think that needs to be resolved between the Department of the Interior and Cliven and if they’re not going to give him his permit, they need to compensate him for it,” he said.

Some other permittees in that area, including the Arizona Strip, still have their grazing permits, Goicoechea said. But he warned there could be more infringement on grazing rights with the possibility the greater sage grouse could be put on the endangered species list.

Goicoechea said he spoke at a town board meeting in Moapa Valley about it.

“This greater sage grouse is a very similar issue in central and northern Nevada. If they are listed at some point there are allotments that are going to be curtailed if not suspended. It’ll be the same issue,” he said.

Ironically, Goicoechea spoke while he was on his way to an eight-state, public land summit in Salt Lake City last week, where officials discussed the possible transfer of federally managed lands to the states where they sit.

“The way that came down with Cliven the bottom line is clearly that could’ve been handled a lot better and maybe it’s time we started looking at state control of these lands, especially the grazing issues, minerals, where we can’t continue to function under the federal government if they’re going to impose those rules and regulations to the extent they did down at Bunkerville,” Goicoechea said. “There were two separate issues: one, the cattle trespass and Cliven’s permit, and the other was the infringement on all the citizens of the State of Nevada.”

“That was martial law the way they imposed it down there on Gold Butte. That can only be done by the president or Congress. I know in my conversations with the governor’s office they denied having any federal troops down there. But I don’t think the BLM has any of those Apache helicopters and they were darn sure there,” he said.

Goicoechea said it raised the issues again about whether BLM rangers really have police powers in Nevada. He said there’s been other confrontations between ranchers and federal authorities, like Ben Colvin in Esmeralda County and Wayne Hage in Nye County, but nothing on this large a scale. Goicoechea said the protest by hundreds could make it more difficult for the BLM to close down another grazing allotment, noting possible closures for the sage grouse in the future could be pre-empted by closures this year by the drought.

“I think that’s going to impact the BLM’s ability to enforce that closure because these guys are going to say, go down and take care of Cliven and when you’re done see me. I think it will hurt the BLM’s effort to regulate and impose regulations on ranchers,” he said.

Goicoechea said most of the ranching industry agrees the situation between Bundy and federal agencies should’ve been settled a long time ago. His son, J.J. Goicoechea, is head of the Nevada Cattleman’s Association, which issued a statement that didn’t directly take a stance on Bundy’s side, but voiced concern over the closing of grazing allotments due to endangered species.

Goicoechea said about 300 cattle had Bundy’s brand. The BLM decided to suspend the roundup April 12 to avoid a conflict with protesters.

So why didn’t the BLM quickly transport the cattle out of the area?

“They couldn’t find anybody who could sell them. Under the regs they had to go to a licensed auction yard,” Goicoechea said. “Nobody wanted to have the cattle because that issue was there. I know the State of Utah flat denied entry to them.”

He said there were even rumors the cattle would be taken to the wild horse holding facility in Palomino Valley.

Goicoechea said the BLM probably could’ve gotten away with the gather if they didn’t start interfering with the rights of Nevadans, mainly free speech. The BLM designated a First Amendment area that was ignored and closed off 600,000 acres of public land during the gather.

For Goicoechea, he said the $1.41 per animal per month in fees he pays to graze cattle is affordable.

“That’s a small part of our expenses compared to fuel and maintenance, tires, equipment. It’s all expensive and it’s getting higher and higher,” he said.