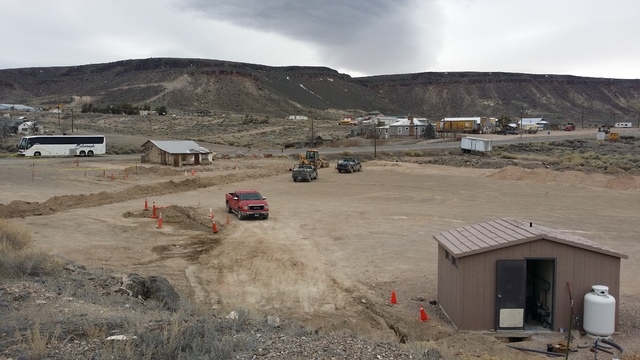 GOLDFIELD — The old mining town’s first rest stop is moving toward construction with an opening envisioned for early fall.

A proposed contract for a general contractor was set to go before a state board this month, the Nevada Department of Transportation reports.

The low bidder was Mesquite-based Trade West Construction Inc. at about $712,368.

The project calls for the construction of the Goldfield visitor center and parking lot along U.S. 95 between First and Second streets, NDOT said.

Last month, crews were preparing the site near U.S. 95 and Crook Street so that water, sewer and electrical lines could be installed ahead of construction.

Since then, NDOT released additional details of the project with an estimated construction of $620,000 to $745,000.

Features, NDOT said via email, are to include:

■ a wood-framed stucco-clad visitor center and a stamped metal roof.

■ eaves along three sides of the visitor center, providing visitor shading to the north, south and east.

■ a unisex bathroom, two informational kiosks with the content to be curated by Esmeralda County, two overhead ceiling fans and three drinking fountains.

■ an asphalt paved lot with 25 parking spaces, including three for handicapped parking and five wider spaces for large trucks.

The property will use a decomposed granite rock as landscaping cover, along with native drought-tolerant plants and shrubs, NDOT said.

G.C. Wallace Inc., of Las Vegas, also known as GCW, Inc., is the project’s lead designer. Groundbreaking is anticipated for May with construction to finish by late September.

Esmeralda County will be responsible for maintaining the facility upon completion, NDOT said.