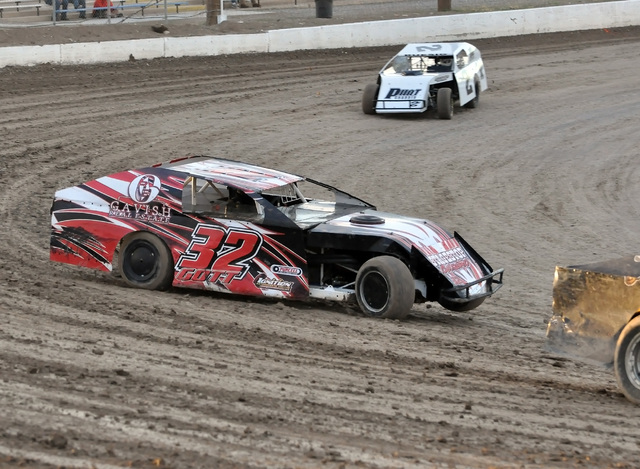 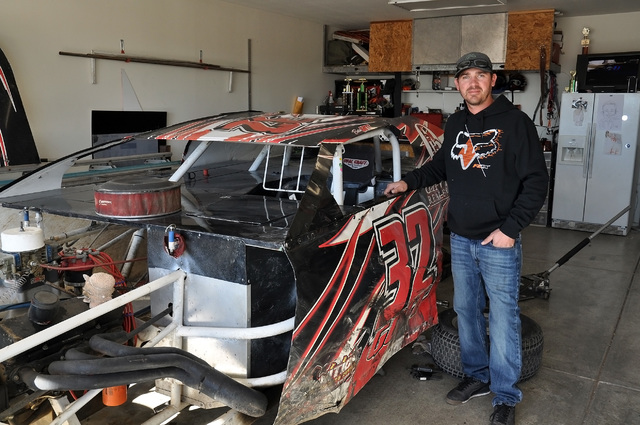 Horace Langford Jr. / Pahrump Valley Times Beau Gott stands in front of his Modified at his home in Pahrump. Gott said he couldn't do it without his sponsors, Gavish Real Estate and the Stage Coach Casino. 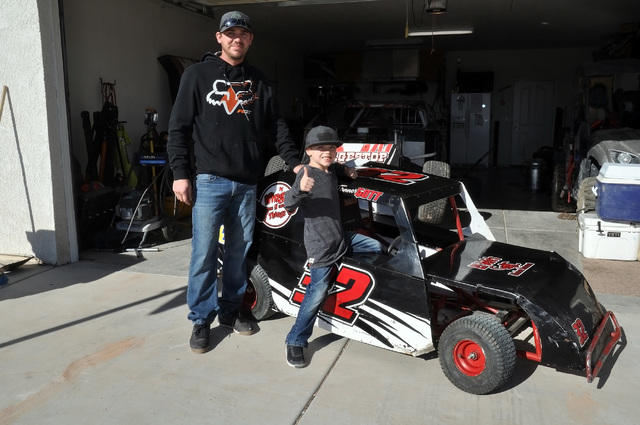 Horace Langford Jr. / Pahrump Valley Times Beau Gott stands with his 6-year-old son Tanner Gott, who was also a champion at the speedway for the Junior Mini Dwarf Class.

Beau Gott said he wasn’t even thinking of the championship until midway through the season.

“I wrecked my car during a practice run and so I wasn’t even thinking about the Modified championship in the beginning,” Gott said.

This year, the Pahrump Valley Speedway Modified Championship came down to the end of the season, with Bryan Wulfenstein and Gott neck and neck in points. In the end, Gott held on with 578 ponts and a 38-point lead. Wulfenstein was in a close second with 54o points and Rich Horibe finished in third with 440 points.

“He was really serious about racing this year,” his wife, Ryanne Gott said. “And he was really excited to win it this year.”

According to Beau Gott, this was his second speedway championship. He had won a Pro Stock Championship also back in 2005 at 21. He supports his sport of choice by working for the Nye County road department.

Beau Gott, now at 32, has been racing since he was 14 and was heavily influenced to pick up racing by his father, who was an off-road racer.

“I grew up watching my Dad (Keith Gott) race from as long as I can remember,” Beau Gott said. “He raced SNORE off-road, which I have vague memories of and started racing at the Bullring in Vegas after that.”

Beau Gott said he had moved to Pahrump when he was 12, he and his older brother (Keith “Boozer” Gott) started racing at Pahrump Valley Speedway.

“I had to sit back and watch for what felt like forever until I got my chance at the age of 14,” he said. “I laid sod, which felt like a thousand square feet, at a family friend’s house in trade for my first mini stock.”

He said he raced off and on ever since then, depending on other sports and as he got older it revolved around work, and of course, money.

As far as racing aspirations go, the Modified racer said he’s in it for the fun of it, but if it takes him out of Pahrump he will go with where the opportunities take him.

“I love racing at Pahrump speedway, it is probably the funnest track to drive on that I have raced,” Gott said. “I am not sure if it is because I am most comfortable here or what. I have an opportunity brewing to drive an asphalt late-model car next year.”

For Gott, racing asphalt is a whole different world.

“I’m excited and nervous about that, at the same time I think it will be worth a shot,” he said. “We have some knowledgeable friends and car owners, so it could turn out to be a worthwhile venture.”

But for the most part driving Modifieds has been his dream since he was a kid, so he said he could never give it up completely.

“I love the dirt,” Gott said summing it up simply.

When Gott races, he doesn’t race alone. The sport is something he shares with his wife and his children. In fact, his son Tanner has the racing bug at six years old and just won the Mini Dwarf Championship at the track. So this may be the first time that a father and son have won championships during the same season at Pahrump Valley.

“Racing for me isn’t just loading up the car and going to the track, it’s a complete family event. I have a lot of support from family and friends and seeing turn four of the stands full of them and cheering makes it all worth it.”

He said he enjoys most seeing the smile on his dad’s face after a good night of racing. He also enjoys the competitiveness of the sport and the adrenaline rush he gets when he is behind the wheel.

And of course his wife is a big part of his racing team.

“Ryanne is a big part of this racing team,” Beau Gott said. “She is super supportive, but at the same time she keeps me in line. If she notices me stressing about the car or an upcoming race, she helps me through it.”

She used to come in the pits and help him out, but since the Gott family has kids, she stays in the stands and “holds down the fort.”

As far as keeping racing from consuming all his time, he said it’s tough.

“Racing does consume me in some ways,” Beau Gott said. “It’s supposed to be fun, I try to keep that in mind. It takes a lot of time and effort to keep the car running and competitive.”

The racer races every two weeks and so after the race he said he tries to dedicate that week after just to his family.

“The week prior to a race is pretty hectic, depending on how the last race went,” he said. “You might have broken parts or setup issues but I try to take my time and knock things off of the list, one problem at a time.”

Beau Gott is not a motorhead, but still manages to spend a lot of personal time in the maintenance of his car. He said he does a lot of the “normal work on his car.”

And of course having sponsors helps with that maintenance. He said he was thankful for having Gavish Real Estate and the Stagestop Casino as sponsors.

“I’m not a mechanic, but have learned a lot over the years,” Beau Gott said. “When it comes to engines and transmissions, I let the professionals take care of that.”

He said the maintenance week to week is sometimes hard to keep up with, but the main struggle with the modifieds is setup.

“Finding traction is tough, there are so many adjustments it can drive you crazy,” the racer said. “I’ve learned a lot the past couple of years, but have a ways to go.”

Over the years he has had some tough opponents and he said it was hard to just name one. He said in the beginning Sam Stringer was the racer to beat on the track and then it was Jason Pike.

Now in his second year of Modifieds he said Pike is still hard to beat, along with Clifton King and Bryan Wulfenstein.

“I am kind of glad that Jason is now racing less and spending time with his kids, because he is hard to beat,” Beau Gott said.