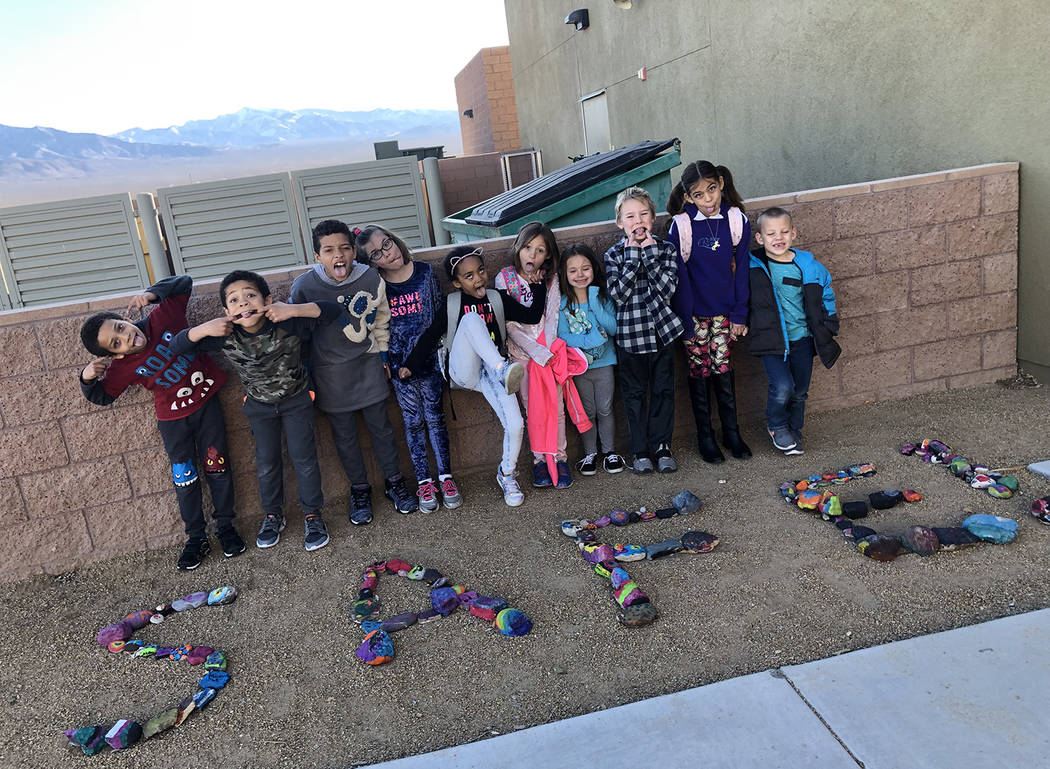 Special to the Pahrump Valley Times Local elementary school students enrolled in the school district's SAFE program, strike poses before colorful rocks painted during a recent parent engagement night. The free before and after school program came about from a five year 21st Century Grant through NyE Communities Coalition.

Thanks to a state grant, Pahrump elementary schools and the sole middle school have implemented a special before-and-after-school program for students.

Hall also said there is no cost associated with the program, due to it being grant funded.

“This is the second SAFE program to be operating within the school district right now. There is also one at the middle school,” Hall said. “NyE Communities Coalition is administering the 21st Century Grant for this one, which covers all four elementary schools in Pahrump. The afternoon hours are from 3:15 p.m. to 5:25 p.m., while the morning hours are from 7:35 a.m. until school starts.”

Regarding the popularity of the program, Hall noted that SAFE has reached its capacity in some of the schools, for now, at J.G. Johnson Elementary, Manse Elementary, and Floyd Elementary School.

“We do have a limit right now at about 100 kids per school, and those schools have a waiting list, but most of the time we are able to cycle the kids off the waiting list very very quickly,” she said. “I believe we have about 415 kids right now enrolled in the entire program. It started toward the beginning of the school year, but we started a few weeks late because it was brand new and we had to make sure everything was in place. This is the first year of a five-year grant.”

Unlike some school programs which implement mainly fun and games, Hall said the SAFE program focuses on improving math and reading scores.

“We have a lot of academic programming, which includes academic games, science technology, engineering and robotics,” she said. “We have reading competitions and a journaling club in a couple of the programs. We also have a lot of fun with physical activities, and we bring in community partners to come to our arts and crafts activities. We will soon start analyzing data to find out if it does have a positive impact on the students’ grades.”

Since its implementation, Hall also said the program appears to be a big convenience for working parents, especially after the school district changed its start time.

“This is been very helpful to the parents that start work around 8 a.m.,” she said. “The kids also seem to really love it. We actually just performed a survey and I haven’t analyzed all of the results yet, but so far it’s looking very encouraging and parents are very happy with the programs. We also have snacks for the kids, which are provided through the school district program. We have forms at all of the school offices, where parents can just ask for an enrollment form. A lot of our staff are paraprofessionals from the school district, so it’s a really good partnership between the school district and NyE Communities Coalition.”