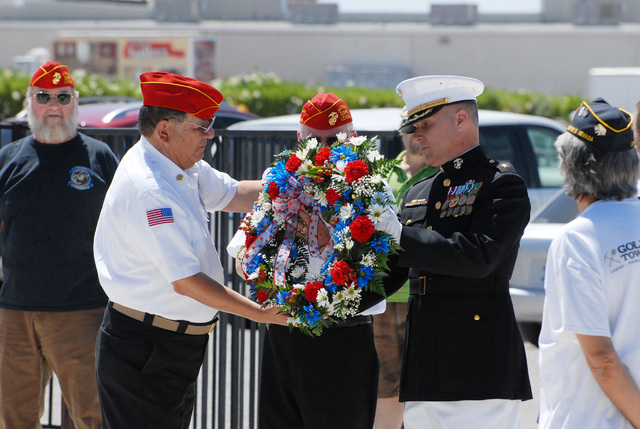 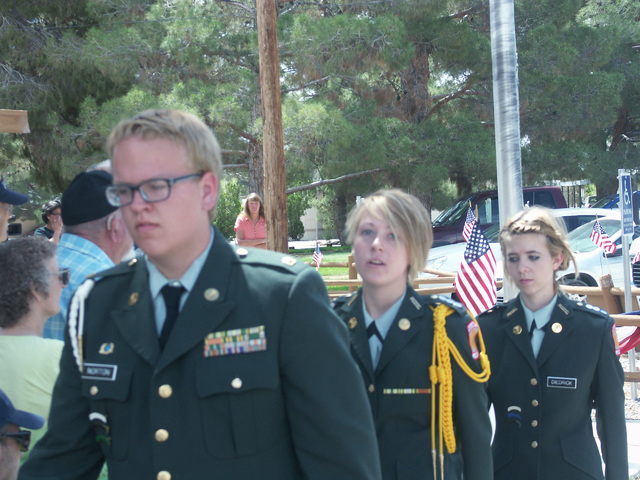 American veterans who sacrificed their lives during conflicts around the world were honored this past weekend during Memorial Day observances.

Locally, two events were held in the community during the holiday weekend.

Rice agreed to officiate the ceremony after the center’s regular presenter, Don Macintosh, fell ill earlier in the week.

“At the last moment we had to change a few around. The high school’s ROTC program presented colors and conducted the annual retiring of the center’s flag. Every year we normally receive a flag that is donated. The retired flag will be properly disposed of during a burial ceremony in September at the VFW Post on Homestead,” he said.

During his speech on Friday, he cautioned that too many Americans have lost sight of the real meaning of Memorial Day, which is now known as the unofficial kick-off for the summer season.

“As many of us prepare to use the three-day weekend to take a road trip or enjoy a barbecue, we should also stop and consider the deeper and true meaning Memorial Day. Regardless of what it means to you, we cannot avoid the fact that brave United States citizens died with the purpose of defending our freedom firmly in mind. While you enjoy the day off, take a few minutes to think about the people who have died to protect our way of life,” he said.

Rice also reflected on his family’s legacy of military service dating back to the Civil War.

“I still have pictures of my great-grandfather in uniform when he was in the Civil War. My dad served during World War I and my oldest brother was in World War II. I was in Korea,” he said, wiping a tear from his eye.

On Monday, scores of local veterans and their families also gathered at the veterans’ memorial section of Chief Tecopa Cemetery.

Local veteran Bruce Cox reminded attendees of the importance of keeping focus on the ultimate sacrifice of more than a million brave men and women who gave their lives in defense of all Americans over the years.

“Many of the people who let Memorial Day pass by without a second thought may very well owe their existence to the courageous sacrifices of a soldier, sailor, airman or Marine on some foreign soil in some bygone time.” Cox said. “Certainly every loss of life is tragic, especially one that is ended in the heat of combat. I hope that on this Memorial Day, the American people can direct attention in remembrance of our nation’s heroic defenders whose lives were cut tragically short.”

Pahrump Town Board member Dr. Tom Waters, an Air Force veteran, has experienced the tragedy of losing a family member during combat.

Waters spoke about the loss of his brother during the Vietnam War as well as several friends who returned home in flag-draped coffins during that conflict.

“Because we care so much about our family and friends, each Memorial Day I take time out to think about them. I think about the friends I left in Vietnam. It is said with very good reason that Memorial Day is never celebrated. It is only observed and honored,” he said.

The latter is a symbolic replacement of a cross on the battlefield or at the base camp for a soldier who has been killed.

Military historians say its purpose is to show honor and respect for the fallen at the battle site.

The practice is believed to have started during the American Civil War as a means of identifying the bodies on the battleground before they were removed.