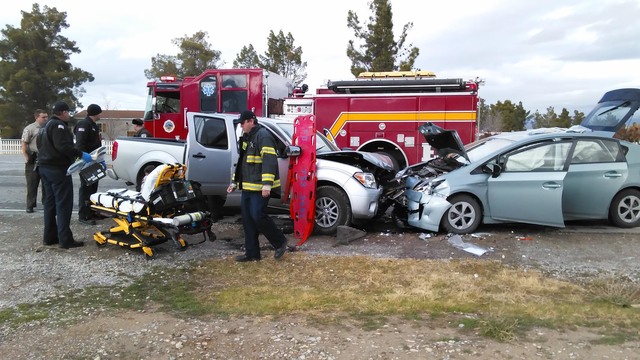 Nye County Sheriff’s deputies, along with Pahrump Valley Fire and Rescue crews, responded to the scene just after 1 p.m.

Pahrump resident Pam Gould said she was in her Basin Avenue home doing chores when she and her husband heard the collision.

“It sounded like a boom and I first thought my dog got into something because he always makes noises outside,” Gould said. “I ran out the house and saw one man with blood all over his face and we got a towel and ice for the man’s nose because the entire bridge of his nose was caved in.”

Gould also said she spoke to the driver involved in the collision as well as another motorist behind that driver.

“Before the crash, the witnesses behind him said he was all over the road, until he ended up hitting the truck head-on,” she said. “I then asked the driver in the head-on if he was diabetic and he told me yes. I didn’t smell any alcohol on him so he may have had a diabetic seizure.”

Basin Avenue was closed to all westbound traffic as crews worked to clear the scene.

All of the occupants of both vehicles are expected to recover from their injuries.