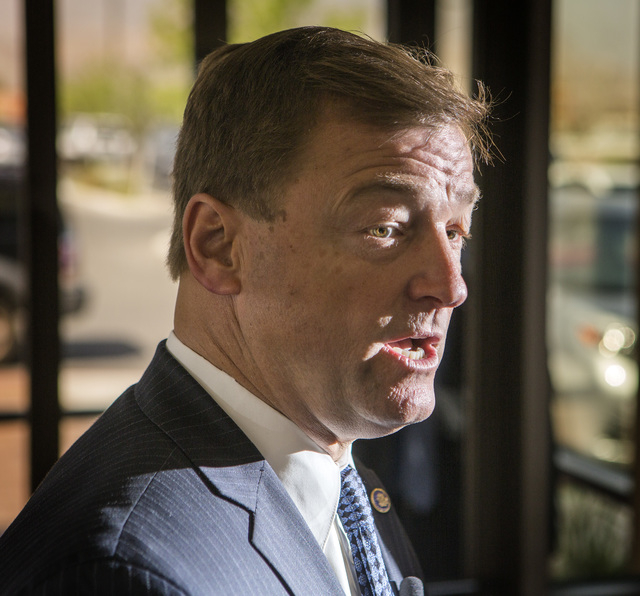 Republican U.S. Sen. Dean Heller of Nevada said Wednesday that he will do everything in his power to keep nuclear waste out of Yucca Mountain.

That is one of the challenges he will assume as Nevada’s senior senator when his colleague on the other side of the aisle, Sen. Harry Reid, D-Nev., retires after three decades in Congress.

“I’ll take some of the issues that Senator Reid and I have worked on, worked closely together, continue to push them, issues that deal with Yucca Mountain, economic growth, housing and some of these issues that are near and dear to both of us,” Heller said.

On Yucca Mountain, Heller said, “I think it’s over. I think the discussion has been had over the last 20 years, and I think it’s over. Yucca’s dead. We’re going to move on. I’ll continue to push that narrative just like Senator Reid and Senator Bryan before me.

“But I do not see any efforts, any issue that is going to revive Yucca Mountain as a viable place to put nuclear waste. Can I stop it? I will do everything in my capacity to do so,” he said.

Heller, a member of the Senate Veterans Affairs Committee, offered his perspective on a wide range of issues as he emerged from a roundtable discussion with leaders of local veterans groups.

He said their top concerns are problems they’ve had with the state’s 17,000 female veterans getting access to health care services at local VA clinics and a broader issue with many of the state’s 300,000 veterans getting disability claims processed in a timely fashion at the Veterans Benefits Administration’s regional office in Reno.

The Reno office has a reputation for being the worst in the nation. But things have improved since its director, Edward Russell, was put on administrative leave in July, Heller said.

The Reno office has cut wait times in half but remains one of the 10 poorest-performing VA offices in the nation.

“That’s pretty frustrating for every veteran here in this state that wasn’t getting the services they deserve,” he said. In many cases Nevada veterans were waiting “well over 400 days to get a benefits package.”

Heller and Rep. Dina Titus, D-Nev., a member of the House Veterans Affairs Committee, have been calling for Russell’s ouster since last year. This week they learned he will be transferred to a new position in Washington, D.C., but Heller was unclear about the terms of Russell’s transfer.

Asked what he intends to do to hold VA officials accountable, Heller said, “I’m going to talk to Secretary (Robert) McDonald and see what his position is and what he’s going to do about that.”

Although McDonald has “made a few mistakes here in the last month or so,” and recently has apologized for falsely saying he once served in Army Special Forces, Heller said he provides “positive momentum” to change the culture of how the VA operates.

Attempts to reach Russell for comment have been unsuccessful.