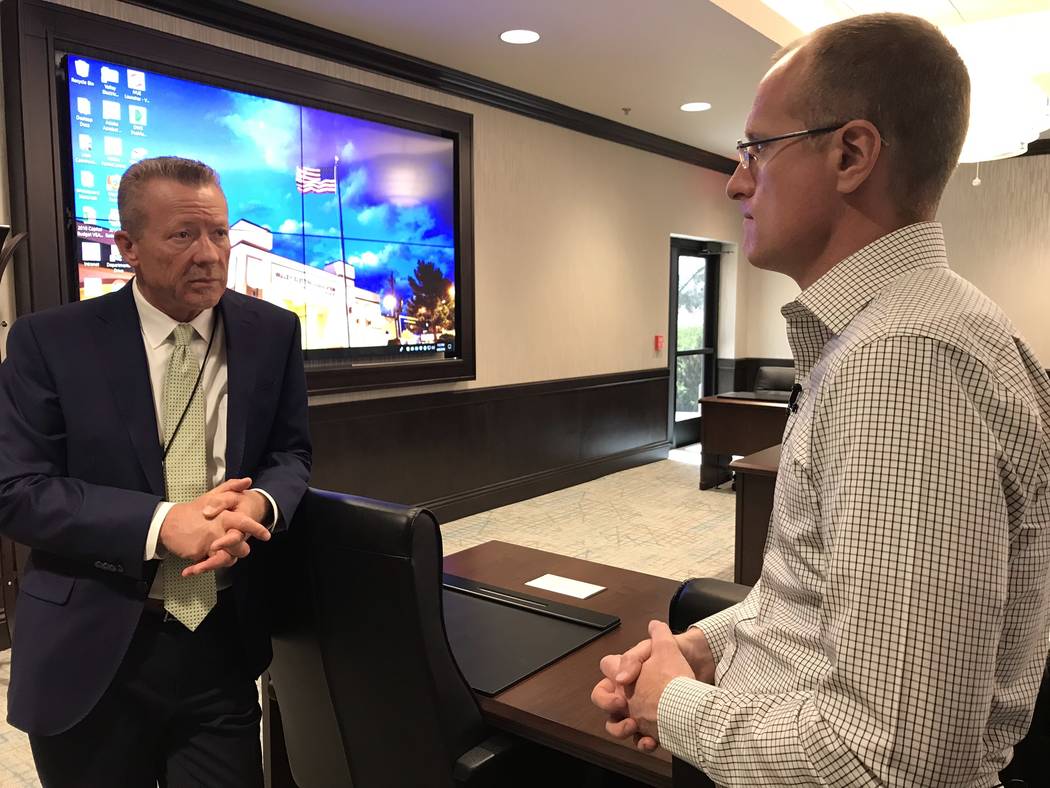 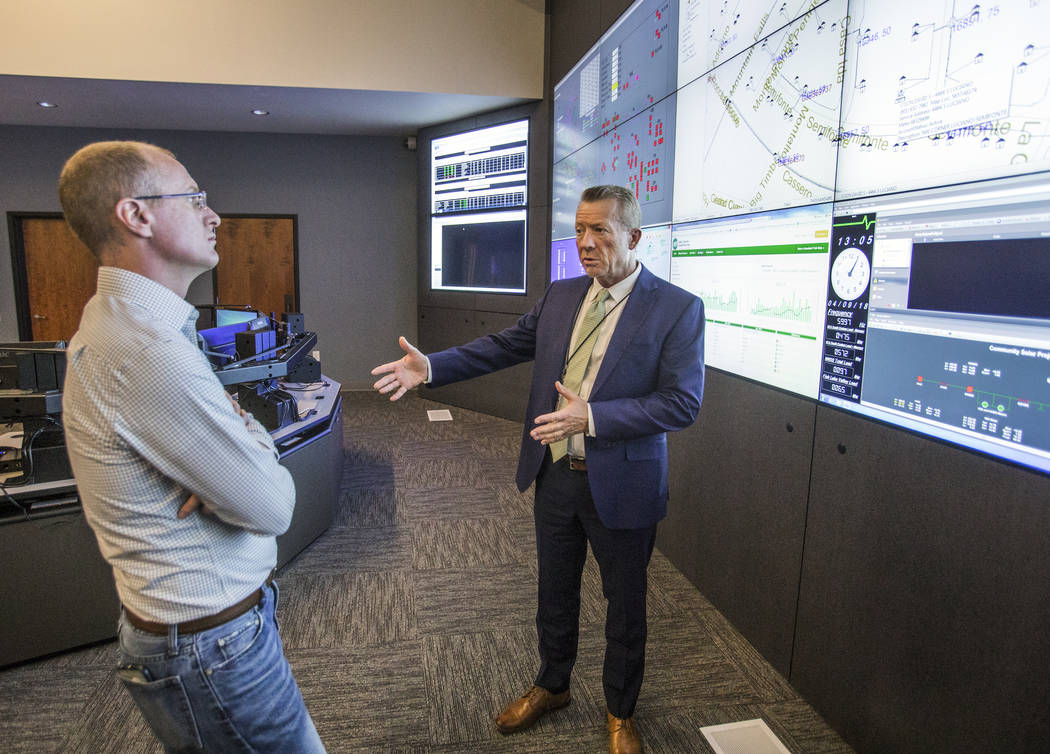 Special to the Pahrump Valley Times/Jeff Scheid Federal Communications Commission Commissioner Brendan Carr (left) stands with Thomas Husted (right), CEO of Valley Electric Association, in the cooperative's dispatch center on April 9, 2018. Carr toured businesses, schools and other places to see the effects high-speed broadband has had on the area. 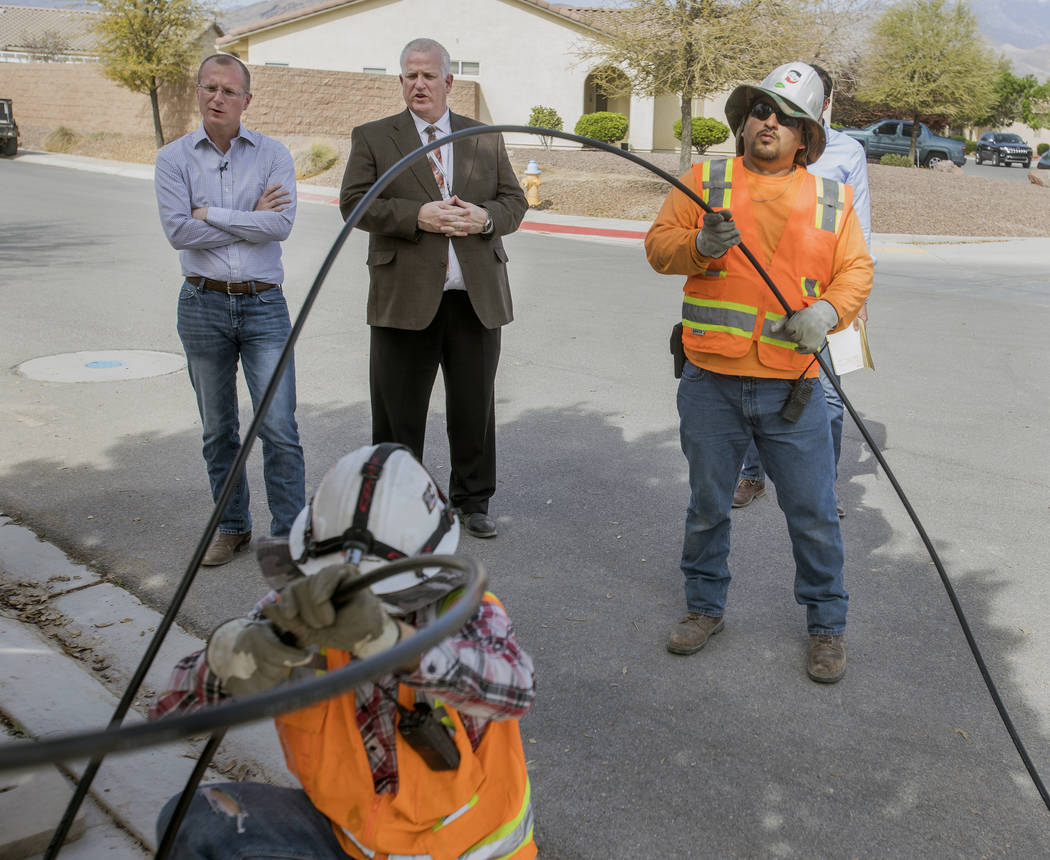 Special to the Pahrump Valley Times/Jeff Scheid Federal Communications Commissioner Brendan Carr (left) looks on as workers lay fiber-optic cables on April 9, 2018. Carr is working to reduce what he called "regulatory red tape" from the approval process companies must go through to lay the infrastructure for high-speed internet. 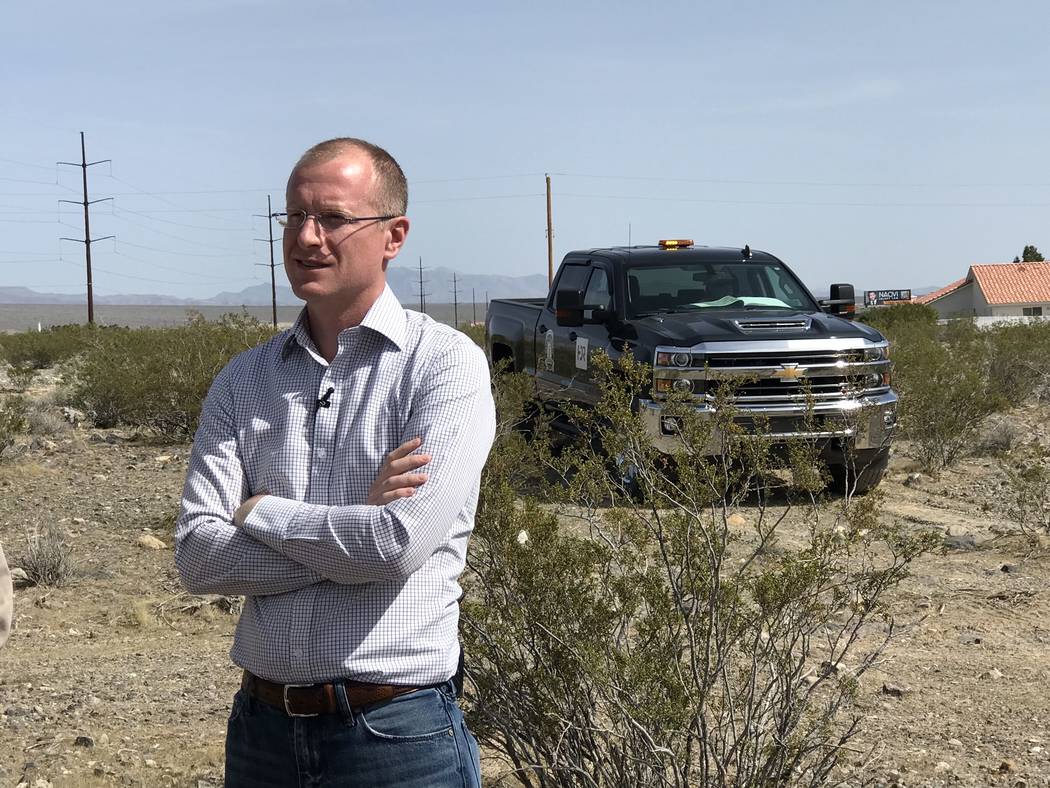 Jeffrey Meehan/Pahrump Valley Times Federal Communications Commissioner Brendan Carr stands in the Winery area in Pahrump on April 9, 2018. Carr spent the day with executives from Valley Electric Association to learn about, and visit, areas where high-speed internet has been deployed. One of those towns was Beatty, pegged to be the first all-fiber community in Nevada. 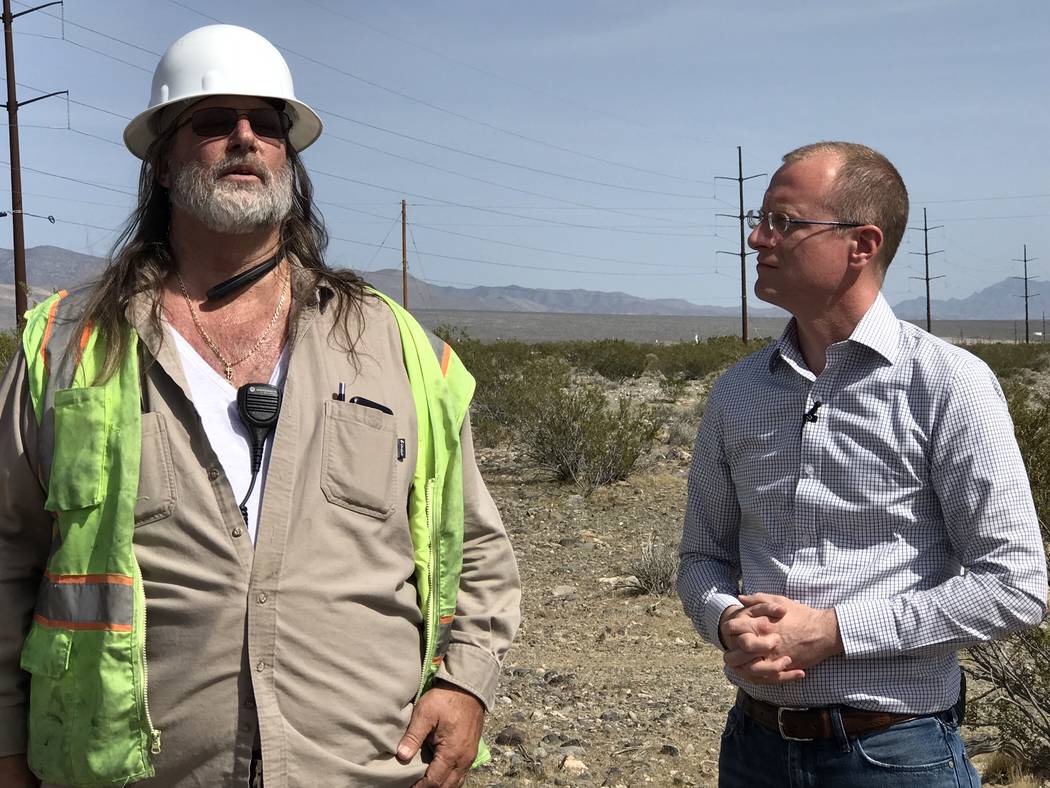 Jeffrey Meehan/Pahrump Valley Times Federal Communications Commissioner Brendan Carr stands in the Winery area in Pahrump on April 9, 2018. Carr spent the day with executives from Valley Electric Association to learn about, and visit, areas where high-speed internet has been deployed. One of those towns was Beatty, pegged to be the first all-fiber community in Nevada.

Federal Communications Commissioner Brendan Carr traveled across parts of Nye County on Monday to learn about the advances made in high-speed communications in Pahrump and surrounding areas.

Carr, who has a key interest in the expansion of high-speed internet across the U.S., visited local areas where innovation by Valley Electric Association Inc. has occurred, or is in the process of development, to get a better picture of what deployment of broadband on “Main Street” looks like.

Another part of Carr’s trip was to gain insight on how the FCC can help move along the deployment of high-speed networks, more quickly, in Nye County and other rural areas across the country.

Carr said he wants to cut the “regulatory red tape in D.C.” to accomplish this goal — something he has already made headway on since he was confirmed by the Senate in the fall of 2017.

Commissioner Carr found many positive examples due to the deployment of high-speed broadband in the area’s communities during his day-long tour that began in Beatty.

There, he visited Beatty Medical Clinic, which was on the verge of closing before Valley expanded its high-speed broadband to the town. Beatty is set to be the state’s first all-fiber community, which will give local residents and businesses internet speeds up to one gigabit per second.

Carr also stopped at the high school in Beatty, where students are benefiting from faster internet speeds. From there, Carr made his way to the Ponderosa Dairy in Amargosa Valley to see how broadband effects that organization’s operation and then headed to Pahrump.

He toured Valley Electric’s dispatch center in Pahrump and met with Valley Electric CEO Thomas Husted at the cooperative’s headquarters on Highway 372. Husted spoke of the benefits of faster internet speeds in Pahrump and surrounding communities, along with how regulations have made things difficult in some instances, particularly in areas where it is necessary to go through federally-owned lands.

Pahrump will see expansions of Valley’s fiber-optic network through 2018. Lines are already being laid in the Winery area and deployment to Mountain Falls is in development, along with bringing fiber to other areas of town.

Valley’s broadband subscribership has gone up since its implementation. At the start of 2017, there was roughly more than 2,700 subscribers to broadband. That number rose to more than 7,100 by the end of 2017, according to data from the cooperative.

Carr ended his trip to Nye County in the town of Mountain Springs before heading back to Las Vegas, where he was planning to attend the National Association of Broadcasters Show.

Carr has made efforts to expand high-speed internet, especially in the area of 5G networks.

Near the end of March, Carr voted affirmatively on a measure that essentially streamlines the deployment process for “small cells,” equipment necessary for the next generation of internet advancements in 5G. The measure passed 3-2.

These small cells are smaller in proportion to the large towers used in current deployments of many internet networks, but building a new network of small cells would also require a lot more equipment be placed in cities and towns, at shorter distances. If 5G is deployed, small pieces of equipment would be deployed and attached to things such as light poles and other things of that nature throughout business districts and neighborhoods where that technology was made available.

In an interview with Bloomberg, Carr estimated that there would be an increase of 10 times to 100 times the number of devices needed to operate such a network, though each piece of equipment is much smaller in comparison to a 100-foot tower used in today’s networks.

Under the FCC’s new rules, companies looking to install the smaller equipment no longer have to go through such things as the environmental and historic review process. That doesn’t, however, remove any regulations set at the local, county or state level.

Carr estimated that up to $1.5 billion would be saved by companies installing this type of equipment over the next decade.

“Last year, just that federal process alone, resulted in $36 million that providers were spending on that,” he said.

That number was expected to see heavy increases as companies such as Verizon and AT&T race to start 5G networks.

Overall, the FCC estimated that $275 billion will be spent in the next decade on spreading the 5G network across the country and an estimated 3 million jobs will be created, along with a GDP boost of $500 million.

Carr said the spread of 5G to the Pahrump area was possible.

Faster internet speeds can help give a boost to new technologies such as autonomous vehicles, smart homes and what’s referred to the Internet of Things (IoT), just as a few examples.

The core concept of IoT is that things outside the realm of computers and smartphones, such as refrigerators, washing machines, cars and medical devices, including pacemakers, could be connected to a network, or have that capability.

Though legal and other ramifications exist for IoT’s expansion, some benefits include more efficiency in decision making for businesses, among other benefits such as a health-care worker being able to more closely track a patient’s health status, just to name a couple of examples.