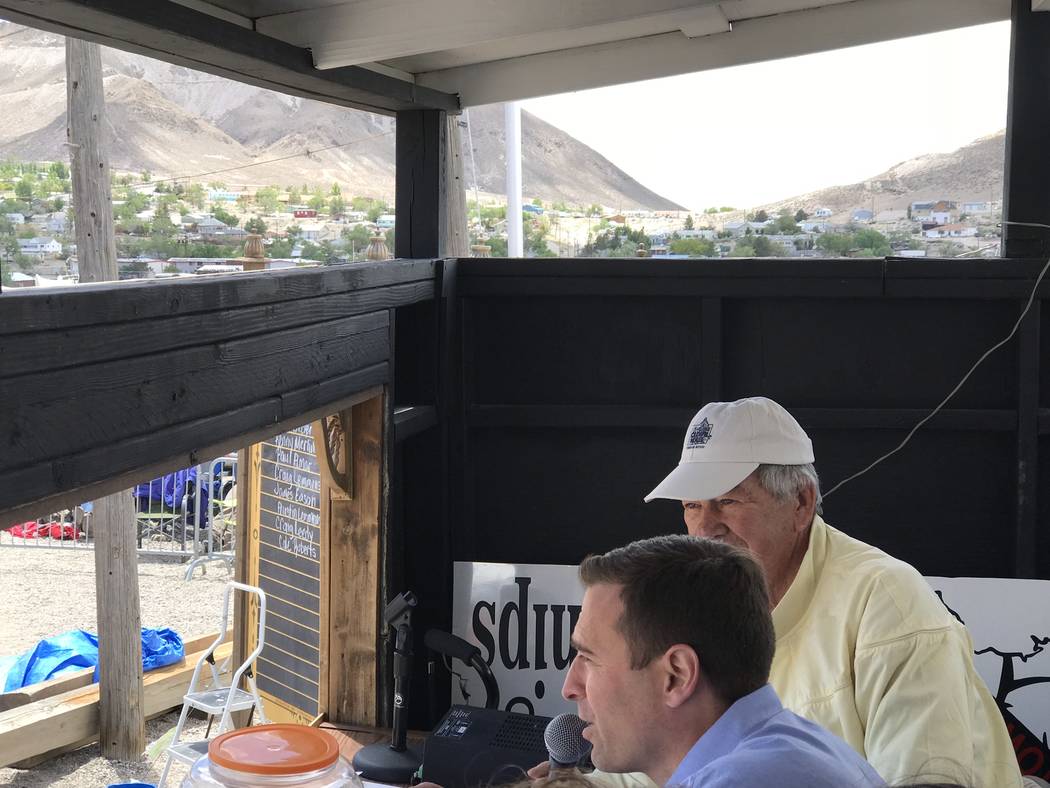 Jeffrey Meehan/Pahrump Valley Times Nevada Attorney General Adam Laxalt (front) speaks at the 2018 Nevada State Mining Championships on May 26, 2018. Laxalt sat next to Clown Motel owner Bob Perchetti who was the announcer for the annual competition. 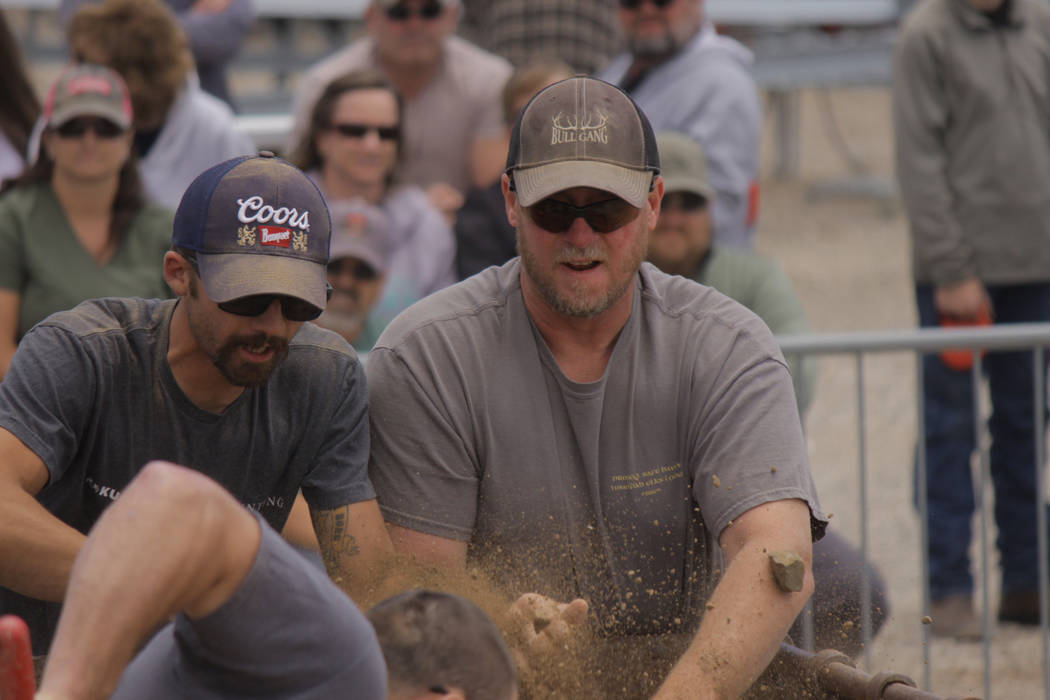 Jeffrey Meehan/Pahrump Valley Times Dirt and rock flies through the air during the men's mucking competition at the 2018 Nevada State Mining Competition. The men's division brought out 10 contestants to vie for the best time in filling an ore cart with one ton of muck. 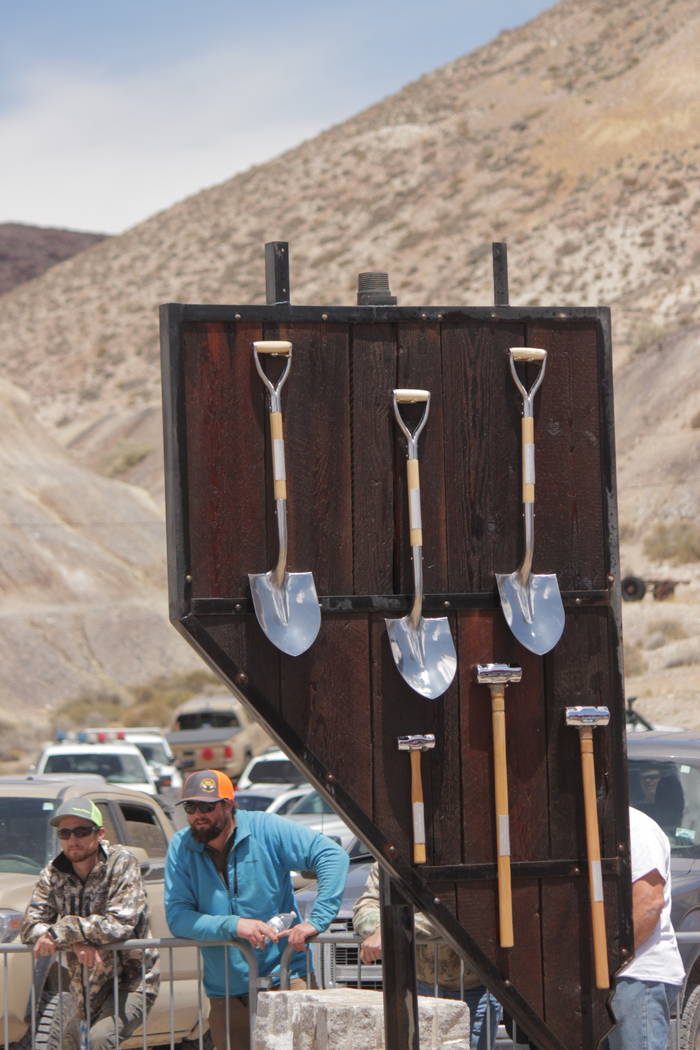 Jeffrey Meehan/Pahrump Valley Times Competitors vied for the No. 1 spots in drilling and mucking during the 2018 Nevada State Mining Championships. The top muckers, in both single and team efforts, received a silver shovel, with the drillers fighting for the silver sledge hammers. 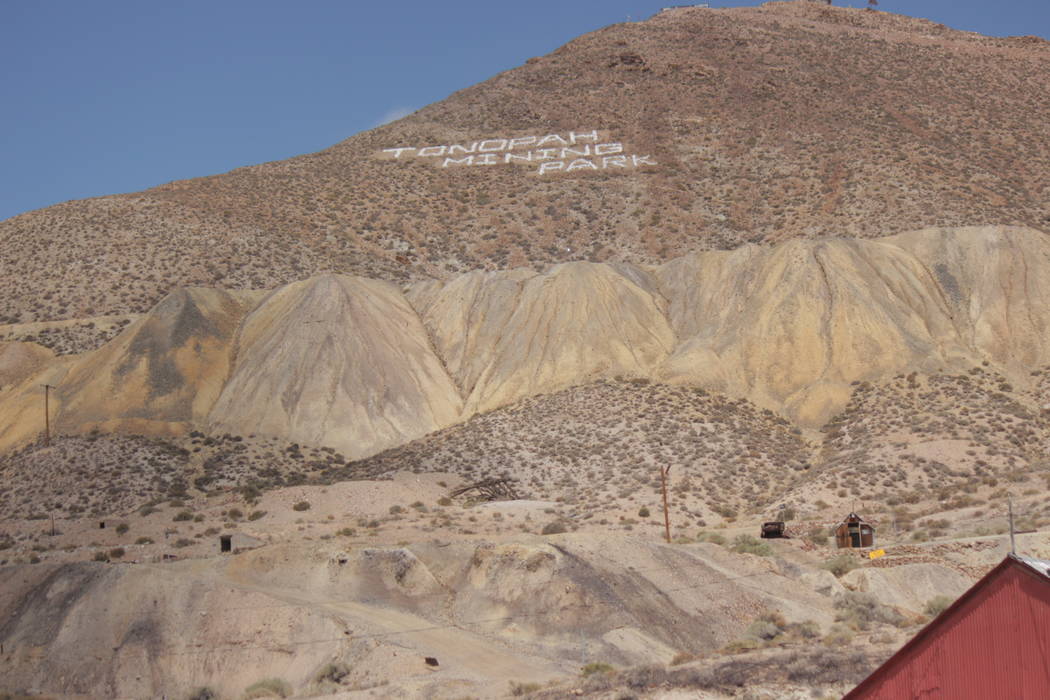 Jeffrey Meehan/Pahrump Valley Times Competitors fought for more than $5,000 in prize money during the 2018 Nevada State Mining Championships. The mucking and drilling competitions brought out competitors from the Western United States and beyond on May 26, 2018, during Jim Butler Days. 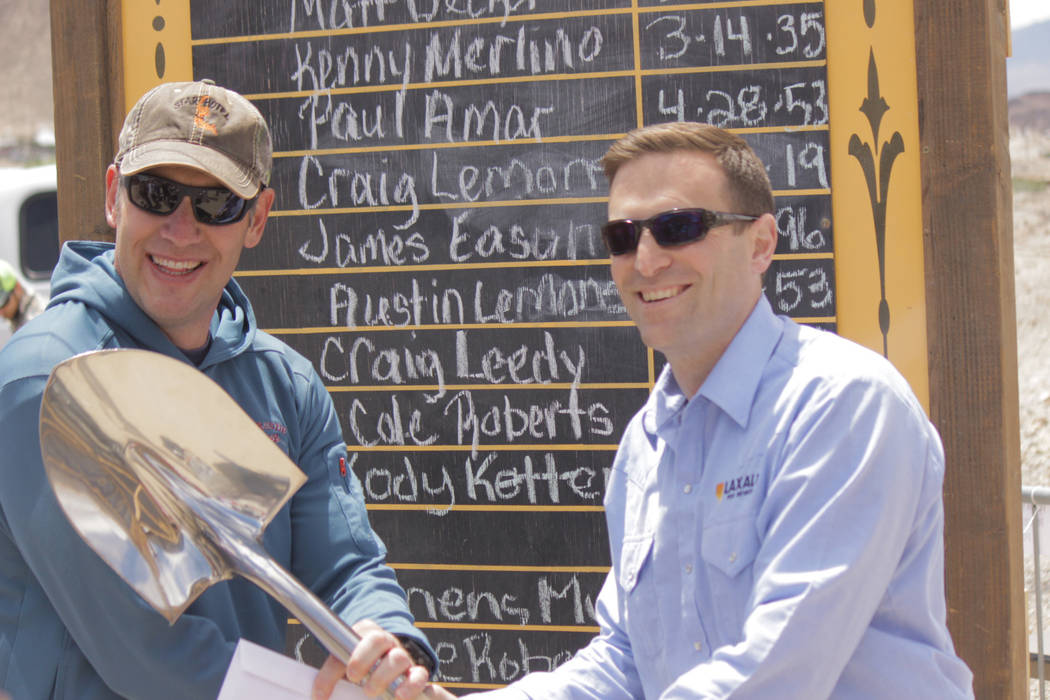 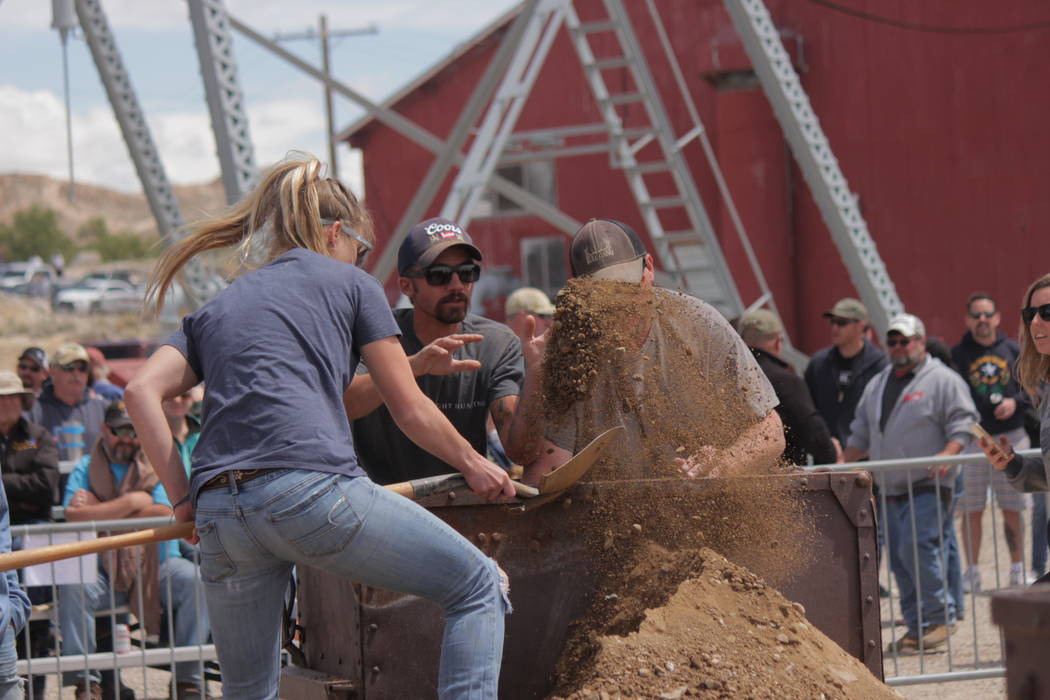 Jeffrey Meehan/Pahrump Valley Times Three women fought for three spots in the women's mucking competition during the 2018 Nevada Mining Competition at the Tonopah Historic Mining Park on May 26, 2018. The prize pool was $350 with the top winner leaving with $200.

Jim Butler Days in Tonopah at the end of May brought out a long list of competitors that battled to be the champion for the 2018 Nevada State Mining Championships.

Bob Perchetti, owner of the Clown Motel, was the announcer at the event.

Nevada Attorney General Adam Laxalt made an appearance at the event and handed out prizes to some of the top winners. Laxalt is running in the primary races for Nevada governor.

Competitors from all over the western United States and beyond come out for the challenge at the Tonopah Historic Mining Park. Entrants race to shovel hundreds of pounds of dirt the fastest and hand drill deeper than their fellow contestants.

Joni Eastley, who organizes the annual competition, said entrants in the contest have come from as far away as Australia.

The first round of competitions was in mucking, where competitors shovel one ton (a half ton for the women’s competitions) of muck into an ore cart. Entrants face off for hundreds of dollars in prizes and a silver shovel goes to the top winner.

This year, James Eason took the top spot in the men’s mucking competition, his fifth consecutive year of taking the title. Eason’s time was 2:26.96, and he collected $400 in prize money.

The mining championships have gone on for a century or more, according to information on the mining park’s website.

This is the 48th year the competition has been held on Memorial Day weekend during Jim Butler Days.

In the 2018 event, men’s team mucking also had a silver shovel for the top winner, with cash prizes paid to the top three slots.

The women’s mucking competition paid three spots, and there were three entrants into that competition. Emma Baker came in first (1:44.36) and collected $200. She was followed by Claire Roberts (2:33.43) for second, collecting $100. Amanda Amar collected $50 for third prize in the women’s competition and had a time of 5:10.01.

Women’s team mucking had a prize pool of $185 for three spots.

The winner of the men’s single jack competition went to Tom Donovan. Contestants hand drill for 10 minutes, and the deepest hole wins.

Donovan was trailed by Matt Decker, who came in second, and Craig Leedy, who came in third. Fourth place was shared by Steve MacDonald and Vern Baker.

The men’s double jack competition had a first-place team of Craig Leedy and Tom Donovan.

The second-place team was Kaleb Denham and Tim Leedy with third place going to Austin Lemons and Brandon Eason.

The women’s single jack competition had a top winner of Emma Baker.

The second-place winner was Claire Roberts with third place going to Jo Denham.