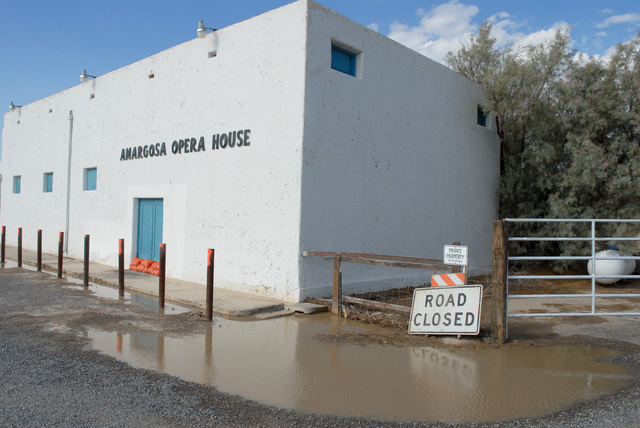 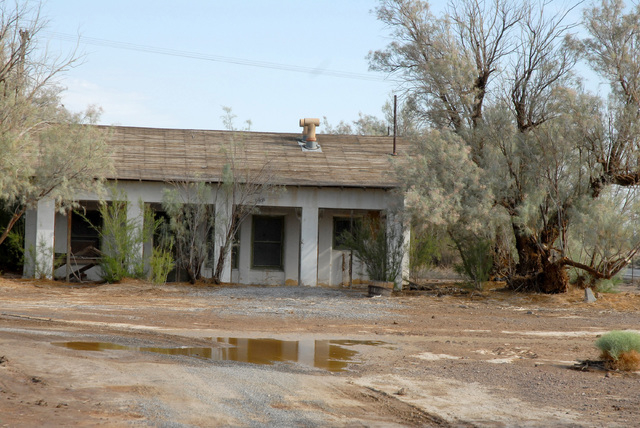 DEATH VALLEY JUNCTION — Aug. 4 was a sunny day in this dusty town between Amargosa Valley and Shoshone.

The flood that soaked the junction seemingly came out of nowhere, with no warning.

“I walked out of Marta’s house and it was nice out — no rain. I was heading out and it looked like laundry soap was rounding the house. Before I knew it, it was just enveloping the town. I didn’t hear anything. I was trudging through knee-deep water and muck,” said Rhonda Shade, who manages the famed Amargosa Opera House.

Rain hardly comes to this desert town on the outskirts of Death Valley National Park. According to the day clerk of the Amargosa Hotel, Kathy Cheney, the last big rain to cause any real damage happened in 2004. “When it does rain, the water all comes down from Death Valley,” she said.

This time the water poured through a broken levy at the intersection of Highway 190 going to Death Valley and Highway 127. Shade said the water flooded the opera house and damaged the floor and walls extensively.

“The water and mud was ankle deep in the opera house,” she remarked. The water then went past the hotel and flooded the cafe and gas station. The hotel suffered little damage.

That morning no one paid attention to the scattered clouds.

“Our night-keep did notice dark clouds in the direction of Death Valley in the morning, but nobody paid too much attention to that. The water lasted quite a while,” Shade explained. “It was just heartbreaking to watch the water. There were even crews out from Cal Trans fixing the road, but they did nothing to help our flooding. I just thought that something would happen and the crew would stop the water. We are talking about historical buildings here. The intersection will always be here.”

Shade said no estimates have been made to determine the cost of the flood damage to the historical buildings on the property. “I am sure it is an astronomical amount,” she said.

She then described the wood floors in the opera house as being warped and buckled.

“They need to be repaired, but there was extensive damage to the rest of the property as well. What we are trying to do is to get in touch with real experienced grant writers because this property needs a lot of money. I don’t think $5,000 will fix the problems here,” Shade commented.

She said California senators, Dianne Feinstein and Barbara Boxer, had been contacted and a representative from Feinstein’s office is coming out to meet with them.

“Again, with this being registered as a national historic site there has to be a larger picture for the Junction with funding and preservation and restoration,” she lamented.

The flood damage was the worst birthday present Marta Becket has ever received. The desert’s famous dancing queen and owner of the Amargosa Opera House, turned 90 on Aug. 9. Becket has lived and performed at Death Valley Junction for the past 50 years.

Aaron Sharp, a physical therapist for Affiliated Chiropractic, attempted to deliver some sunlight in an otherwise dark situation. He had heard from Becket right after the flood when she came to Affiliated for physical therapy.

Becket told sharp all about her problems. Sharp gathered up a 16-man crew and showed up at Becket’s birthday celebration. He didn’t even know it was her birthday.

“We repaired the levy on the highway with equipment lent to us by Brian Wulfenstein of Wulfenstein Construction,” Sharp said. “We also helped put up a historical marker commemorating Marta’s 50 years at the Junction and we cleaned off the mud on the walkways. When we got into the opera house it looked like water had come in. The floors were buckled and there was a lot of dirt in there. We vacuumed and swept the floors, but could not do anything for the floors.”

The volunteers donated about four hours of time to do the work.

The heavy work on the levy couldn’t have been completed without the generous donation of a skid-steer to the workers by Wulfenstein. “I had just met Aaron and his family who had just moved into our new ward. He put out a text message and I called him. I told him I couldn’t be out there to help, so I just wanted to do something for him and sent him and Marta. Marta has done so much for our community. Aaron is a great guy for doing this,” Wulfenstein said.