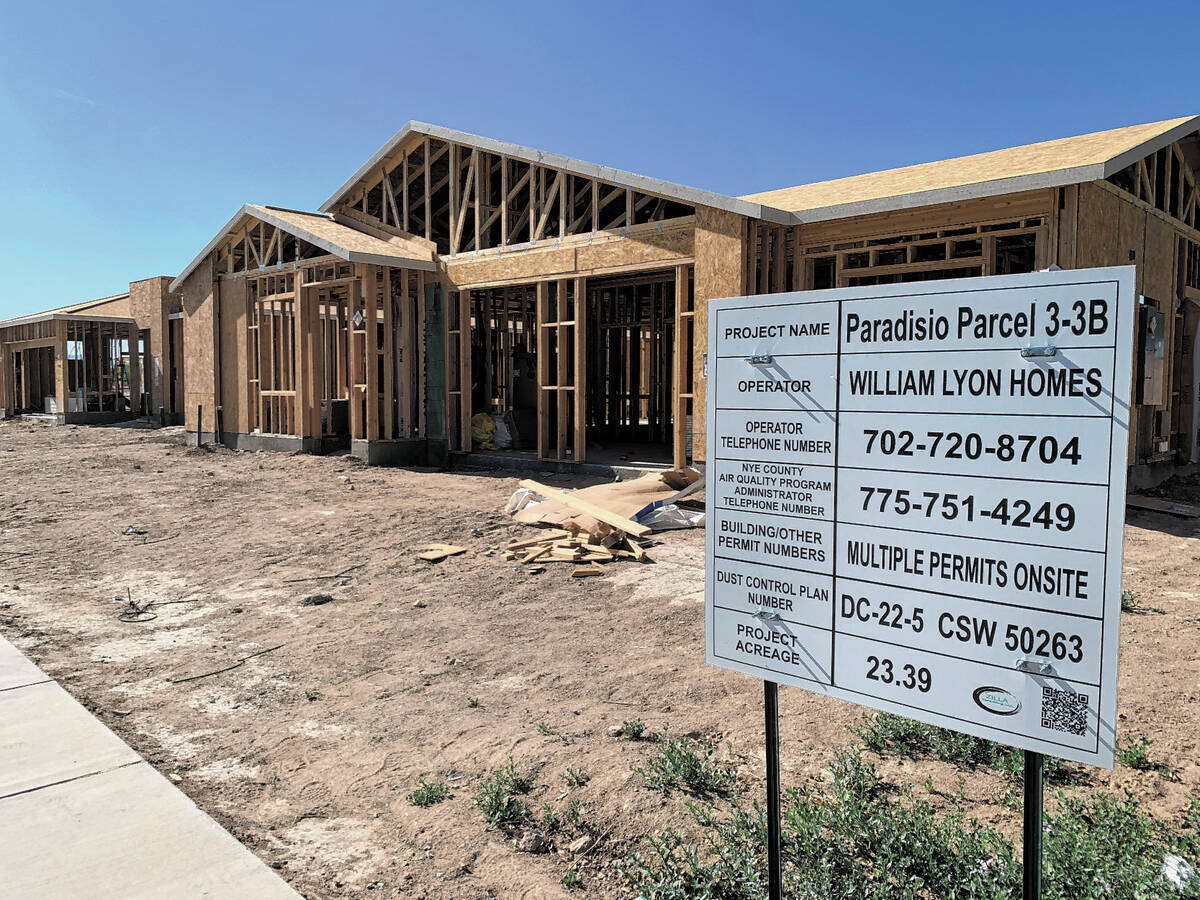 (Brent Schanding/Pahrump Valley Times) New homes under construction on Tuesday, May 17 on Splendido Boulevard in the Mountain Falls community of Pahrump. U.S. builder confidence in the market for new single-family homes fell in September to its lowest level since May 2014, with the exception of spring 2020 at the onset of the pandemic, the National Association of Home Builders reported Monday.

Homebuilder confidence dropped again this month as buyers hit the brakes in Southern Nevada and around the country, following last year’s sales acceleration.

U.S. builder confidence in the market for new single-family homes fell in September to its lowest level since May 2014, with the exception of spring 2020 at the onset of the pandemic, the National Association of Home Builders reported Monday.

Buyer traffic is “weak” in many markets as more people “remain on the sidelines” because of increased mortgage rates and high home prices, the association’s chairman, Jerry Konter, said in a news release.

In another sign of a “weakening market,” 24 percent of builders reported cutting their home prices, up from 19 percent last month, he said.

Overall, builder sentiment has declined every month this year, and the “housing recession shows no signs of abating,” association chief economist Robert Dietz said in the release.

Builders continue to grapple with higher construction costs and an “aggressive monetary policy” from the Federal Reserve that helped push mortgage rates last week to their highest level since 2008, Dietz said.

“In this soft market, more than half of the builders in our survey reported using incentives to bolster sales,” including free amenities and price reductions, he added.

Buyers have been pulling back in recent months in the Las Vegas Valley and across the U.S. as higher mortgage rates wipe out the cheap money that fueled America’s unexpected housing boom after the pandemic hit.

Sales totals are tumbling locally, available inventory has soared and sellers are increasingly slashing their prices.

There have been layoffs in the housing industry this year, and “word has also started to get out” in Southern Nevada that builders and contractors are “having to come to these difficult decisions,” Home Builders Research President Andrew Smith wrote in a report last month.

With builders selling fewer houses and pulling fewer construction permits, “we unfortunately will not be surprised to hear of more downsizing in the near future,” Smith wrote.

Amid the buying spree, builders put buyers on waiting lists, regularly raised prices and in some cases, drew names to determine who could purchase a place.

The Federal Reserve has raised interest rates multiple times this year in an effort to cool inflation, and in the housing market, borrowing costs have jumped sharply.

The average rate on a 30-year home loan was 6.02 percent last week, up from 2.86 percent a year ago, mortgage buyer Freddie Mac reported.

According to federal data, last week’s mortgage rates were the highest since November 2008, when the housing market was spiraling downward following the doomed mid-2000s bubble.