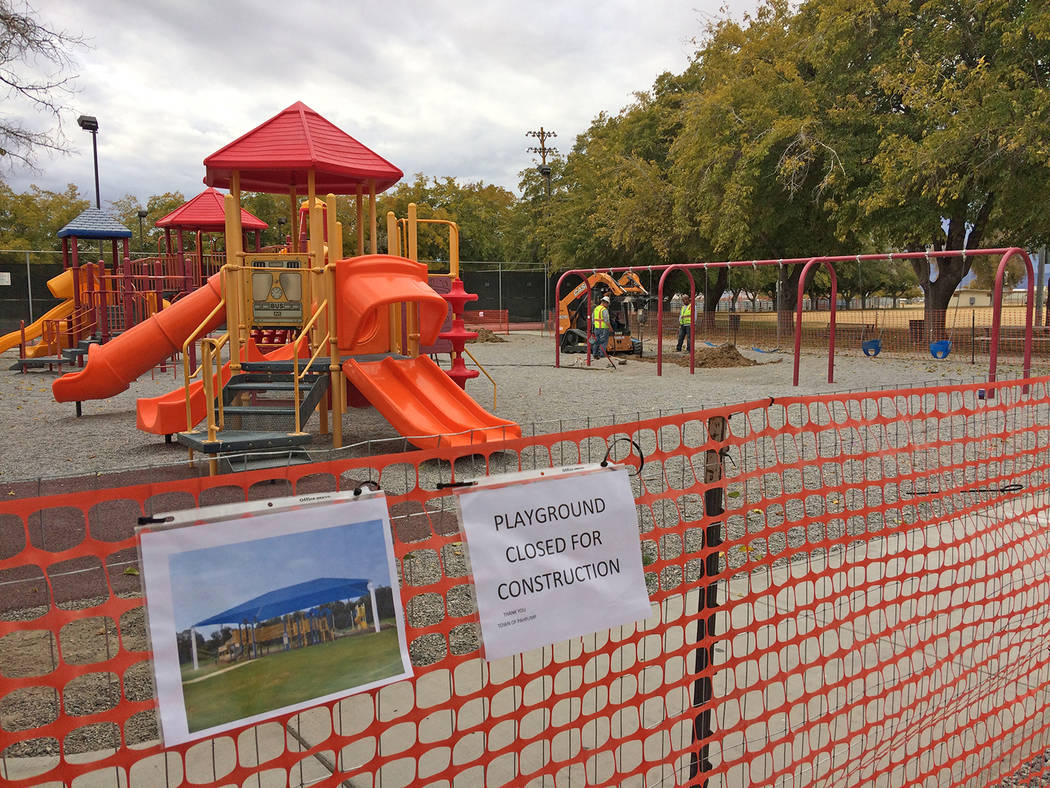 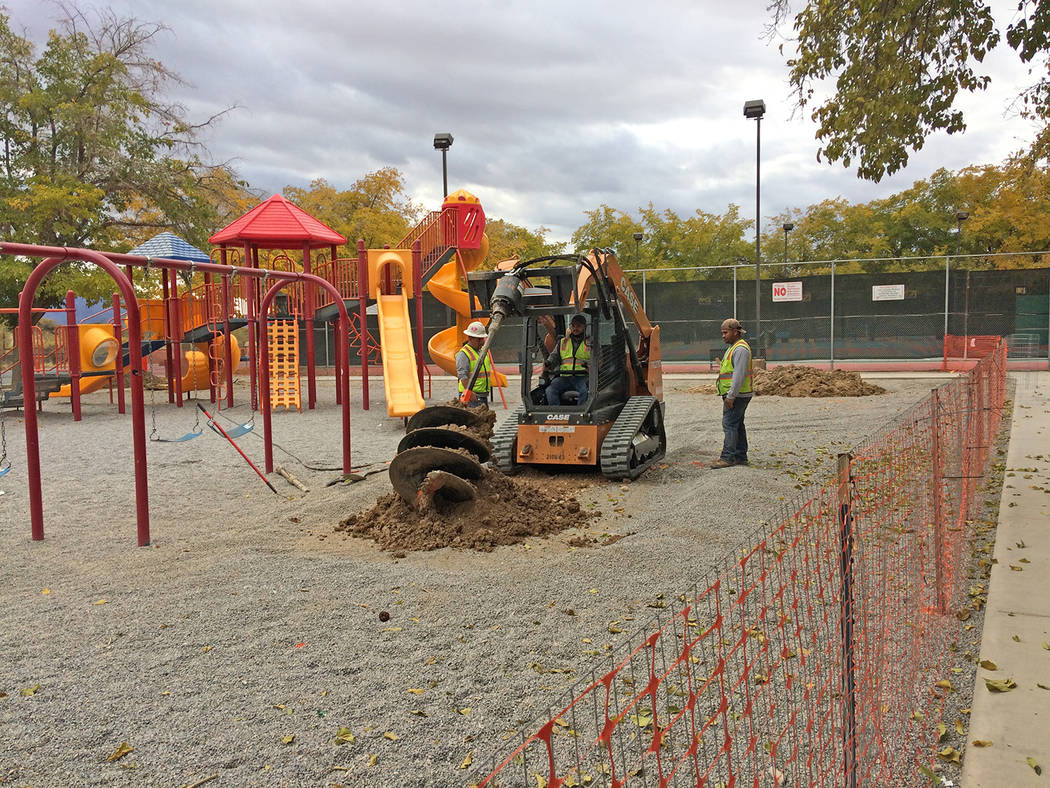 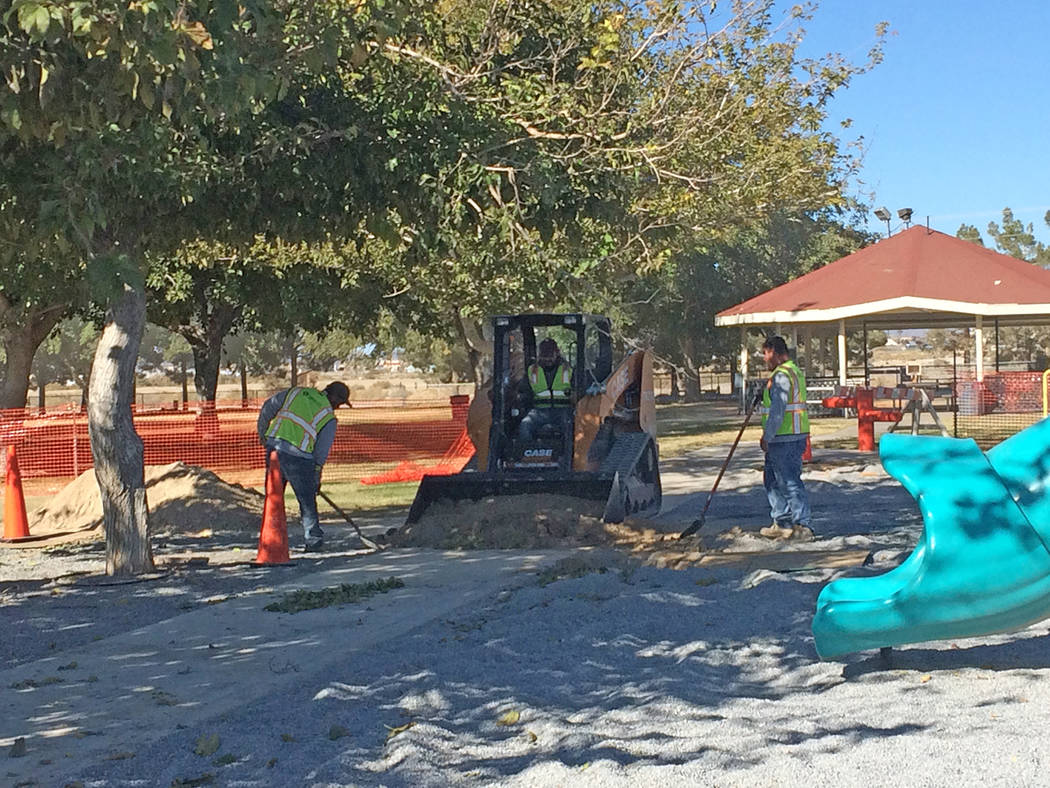 Robin Hebrock/Pahrump Valley Times Workers are pictured laboring at Ian Deutch Memorial Park, where the playground was closed from Nov. 13 to Nov. 28. The prep work was performed to ready the park for new shade structures, which will be erected in the coming months.

Pahrump is a desert and let’s face it, the sunshine here can get pretty intense, especially in the depths of summer.

That is why the town of Pahrump has recently undertaken an improvement project at its local parks, with new shade structures set to grace the playgrounds.

Ian Deutch Memorial Park’s playground was closed for construction earlier this month on Nov. 13 and work crews with USA Shade and Fabric Structures, the contractor for the project, were busy over the following two weeks preparing the foundations that will hold the brand new shade structures aloft.

By Wednesday, Nov. 28, the area was reopened for play and children are now able to clamber all over the climbing structures, glide down the slides and swing to their hearts’ content. However, the shade covers themselves have yet to be placed, with officials reporting that the sun shields are set to be installed in the next couple of months.

With the Ian Deutch playground foundations all wrapped up, the contractor is now shifting its attention to Petrack Park with the same goal in mind.

New foundations for the shade covers are to be installed over the coming two weeks and in the meantime, safety means the playground will be closed until all is complete.

The budgets for these two projects were originally approved in 2017 and the contracts for the shade structure equipment and installation were awarded to USA Shade and Fabric Structures at the Nye County Commission’s May 15 meeting.

The commission, acting as the governing body for the town of Pahrump, approved approximately $125,000 for the Ian Deutch shade covers and another $86,000 for Petrack Park. The money is coming from the town of Pahrump’s capital projects fund.

Simkins Park is not being left out of the improvements, either. This north-side park is also experiencing a closure at the moment with the grassy area under construction and a lighting installation project for the baseball field just getting started.

The lighting project is also being funded by the town of Pahrump at a cost of approximately $474,000. This contract was awarded on Nov. 9 to Industrial Light and Power, the same company that has performed two previous town park lighting projects.