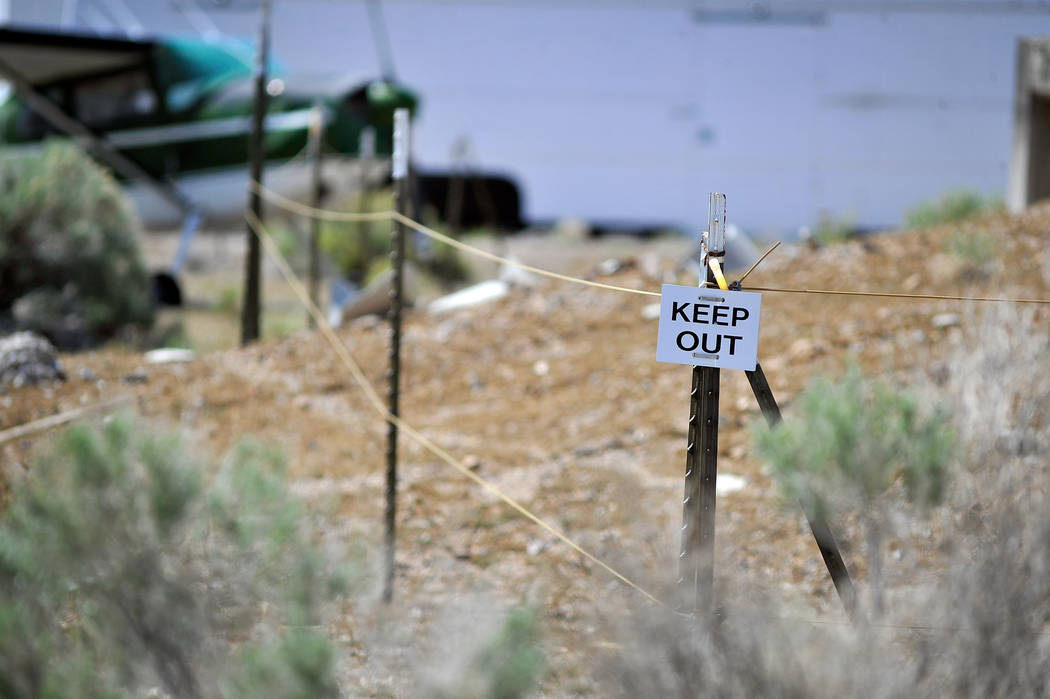 A warning sign is displayed at the Counter-Terrorism Operations Support training facility at the blast site from the 1955 Apple II nuclear bomb test at the Nevada National Security Site on Wednesday, April 20, 2016. Nearly 180,000 first responders from across the country have been trained to search for radioactive sources and how to clean up after a nuclear incident since 1998. David Becker/Las Vegas Review-Journal Follow @davidjaybecker

Nye County Sheriff’s authorities are wondering why an alleged sexual assault at the Nevada National Security Site was not reported to the sheriff’s office.

Moreover, sheriff’s office officials learned about the story from an article in the New York Times published on Jan. 25.

The alleged incident, according to the article, involved a female guard, identified as Jennifer Glover, who reported to her superiors that she was thrown to the ground, handcuffed and hit across the face with the butt of a gun in a smoke-filled warehouse at the site.

During that time, Glover said one man ran his hands up her legs, then grabbed her buttocks and groin,” the article stated. “Another flipped her over, reached into her top to grab her breasts and ripped out her nipple ring. By the time the smoke cleared, they had disappeared.”

When reached for comment on the allegations, media contact Darwin Morgan simply said the matter was an internal issue.

“It’s a contractor, HR, personnel issue and we are monitoring what our contractor is doing as far as the investigation is associated with it.”

The New York Times article went on to note that though Glover could not identify her attackers, she said she knew they were her colleagues and fellow guards taking part in a training exercise at the site, where researchers and scientists conduct top-secret nuclear experiments and develop responses to chemical, biological and nuclear emergencies.

“The encounter in November 2017 followed months of sexual harassment that she said began soon after she was hired,” the article stated. “Her troubles worsened after she reported the attack. Men continued to harass and intimidate her, she said, and they accused her of informing on them. She was reprimanded for calling out sick, which she said she did to avoid her attackers and was ordered to undergo psychiatric evaluations.”

Ultimately, after the New York Times began asking about the alleged attack, Glover, according to the publication, was fired for scheduling infractions and taking a photo of her schedule, according to the article.

“Her use of profanity also placed the safety of the site in jeopardy,” according to her termination letter, the New York Times reported.

When asked for comment from the Nye County Sheriff’s Office, Lt. David Boruchowitz’s response was brief and straightforward.

“We are working with our test site counterparts to ascertain why the entity did not make a report to our agency at the time,” Boruchowitz said.

The case is getting the attention of both U.S. Sen. Catherine Cortez Masto, D-Nevada, and U.S. Sen. Jacky Rosen, D-Nevada.

Rosen wrote in tweet: “This is deeply disturbing. We must do more to put an end to the culture of sexual harassment. I’m pressing for answers because no survivor of sexual assault should go through this.”

Victims of sex crimes generally are not identified. Glover, however, identified herself to the New York Times. Efforts by the Pahrump Valley Times to contact her were not immediately successful.