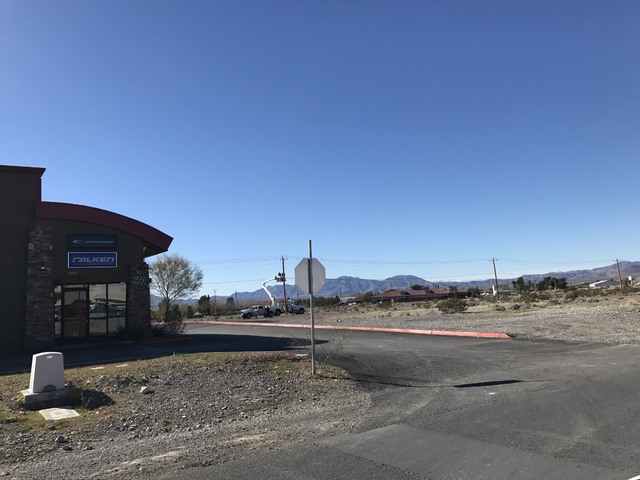 Fast food giant Jack in the Box plans to construct a restaurant in Pahrump, set to be located at 640 S. Highway 160, which is located between China Wok Buffet and Tire Works, across from the Taco Bell. Mick Akers/Pahrump Valley Times

The Pahrump Valley is set to have one more nationally familiar food option in the near future as fast food chain Jack in the Box is set to come to town.

The fast food establishment is planned to be located at 640 S. Highway 160, which is located between China Wok Buffet and Tire Works, across from the Taco Bell.

With Jack in the Box’s pending opening some time this year, it will mark the first fast food restaurant to open its doors in Pahrump since Carl’s Jr. did so in March of 2010. It will mark the second opening of a nationally known brand in town since Dickey’s Barbecue Pit opened in 2016.

The Jack in the Box, which is still in the planning phase, is looking to hire a general manager for the establishment. Interested parties are asked to email lvjackrocks@outlook.com. Interviews for the position, which will be in charge of hiring the rest of the work crew, were slated to begin this week.

Known for their spokesperson, Jack, the oversized clown head who appears in their commercials, Jack in the Box first opened in 1951. Jack in the Box now has 2,250 company and franchised locations in 21 states and Guam.

The fast food giant is credited as being the first hamburger chain to expand on the concept of drive-thru dining, according to their website.

The company also claims to be the first fast food restaurant to offer a breakfast sandwich (1969) and to offer the first take-home salad (1982).