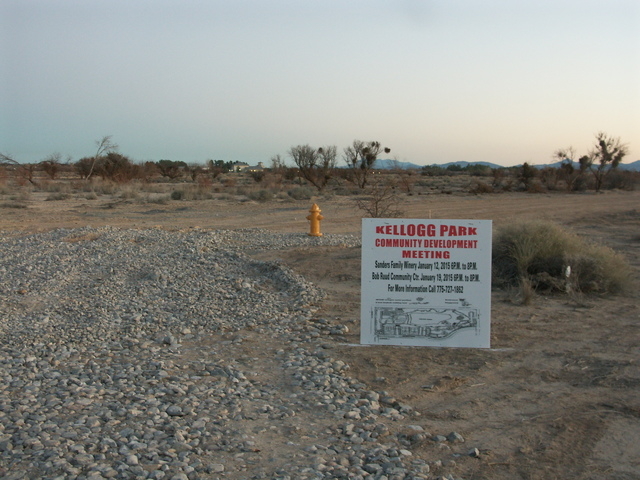 Discussions continue on developing the proposed 80-acre Kellogg Park slated for the south end of town with plans for the first bids to be issued by June.

However, it is not known how the transition from the Pahrump Town Board, which approved the project, to county oversight will impact the project.

More than 60 local residents gathered at Sanders Family Winery on Monday where discussions took place on the development of the Kellogg Park project.

For the last several years, efforts to establish a neighborhood park have been discussed but little progress has been made on the proposal.

Families residing in the area are forced to drive, in some cases, more than 10 miles merely to have access to recreational facilities the local parks afford.

Last year members of the Pahrump Town Board voted to approve a grant submittal plan to the Nevada Division of State Parks for the proposed Kellogg Park project after the state officials provided more than $270,000 in federal funds for local parks and recreation improvement projects.

Buildings and Grounds Supervisor Matt Luis said that the community meeting showed residents who live in the area appeared to be quite supportive in regards to the project.

“I felt that the meeting was very positive,” he said. “I stressed that it would be very limited what we would be able to start in the beginning, but we’re trying to focus on what we can take the funding we have now and create something the community can use right away.”

Sketches of the project unveiled during the meeting outlines a one-acre grassy area, complete with three separated dog parks for large, medium and small pets.

Basketball courts, tennis courts and a picnic area with barbeque grills are also contained in the drawings along with restrooms and playground areas.

Luis that there are mini projects within the first phase that need to be worked out as well, including the installation of power and approved public potable water and sewer systems.

Public restrooms, an approximate half-mile walking trail, grass, landscaping and parking lot all round out the first phase along with engineering costs.

“It can get a little confusing to some,” he said. “This is phase one of the 80-acre project. Part A of phase one, are the items listed with the drawing. That’s what we think that we can afford and move forward with and complete at this point. As far as funding the first phase, we feel that we’re real close.”

Luis noted that discussing the total costs for the entire build-out of the project at this point would be premature.

“Until we have a set of engineered construction plans, that’s when we’ll know the true costs,” he cautioned. “They won’t be able to tell you until they go out, survey and measure the property, etcetera.”

Additionally, Luis said due to the recent county transition, it would be best not to rush into the project. Nye County officials only assumed the fiduciary duties of the town less than two weeks ago.

“It just makes it easier for everyone involved to understand what’s going on,” he said. The key thing right now is to get on the same page with the county.”

Luis said he would hope to have a set of engineering plans to review within three months. He also noted that much can be done at the site at present.

“I hope by April we have that put together and by June starting the bidding process,” he said. “But before we even get that far, we have been cleaning up the area. We’ve cleaned out the Salt Cedars that were out there a few years ago, but they are coming back again. We will continue the cleanup and get it ready even before the engineering comes into play.”

The town board voted to approve a request for proposal by Gary Guy Wilson for a water line installation at the site not to exceed $74,800.

Luis said when completed, Kellogg Park will be unlike any other park in the community.

“Water is always very big concern,” he said. “We’re not in there and bulldozing everything flat and starting over. We want to keep the natural native habitat.”

The park’s next community meeting is scheduled for Jan. 19 at the Bob Ruud Community Center from 6 p.m. to 8 p.m.