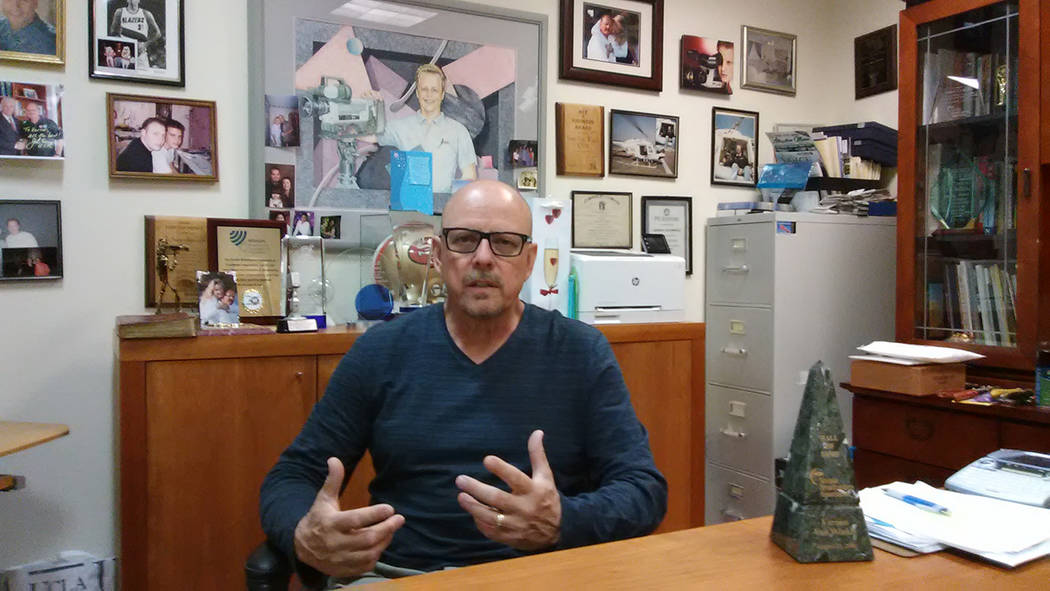 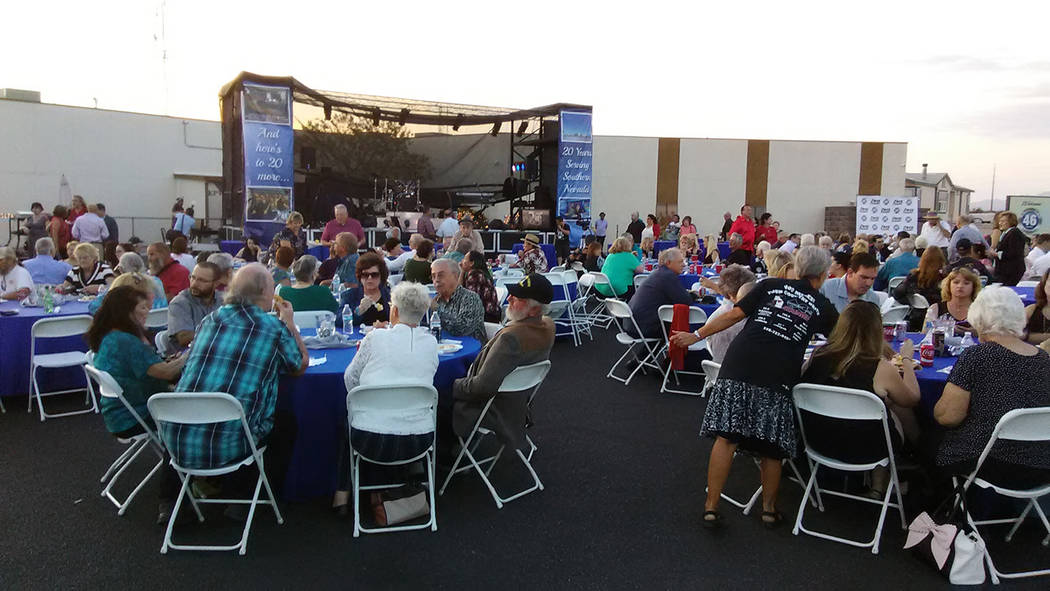 Selwyn Harris/Pahrump Valley Times More than 400 invited guests attended the KPVM 20th anniversary celebration at the station located on Higley Road. The event also served as a reunion for past and present employees and public officials.

It would be safe to say that video production is figuratively in the blood of KPVM Television 46 owner Vern Van Winkle.

The lone television station serving the Pahrump Valley, KPVM, has provided local news coverage to local viewers for the past 20 years.

As such, the station celebrated its 20th anniversary on Sept. 16, where current and former employees and invited guests gathered for a reunion of sorts, while reminiscing years past.

The guest list totaled more than 400 invitees, including officials from the Nye County Sheriff’s Office, Nevada Highway Patrol, Pahrump Valley Fire and Rescue Services, along with town and county officials.

Interestingly, Van Winkle said he and his wife, Ronda, were forced to implement a plan B due to a recent hurricane, of all things.

Van Winkle said his party planner was stranded on the island of Saint Martin after Hurricane Irma struck earlier this month.

“It literally came down to the wire for getting the party set up,” he said. “Our planner was scheduled to return on the ninth of this month. The party was on the 16th and she returned on the 15th. As a result, much of the work was not completed, so we had to do it ourselves even though we were already very, very busy. My wife Ronda basically spearheaded the effort and put a lot of work into that. It was a spectacular event, where the whole team came together and put on a phenomenal event for the community.”

Van Winkle noted that he also wanted to give thanks to those who contributed to the overall success of the television station over the years.

“We just really wanted to acknowledge the fact that this is a team effort to make the content work and to get the content to the public,” he said. “I personally wanted them to know that in the 20 years I’ve been here, I am very thankful that they gave us the opportunity of working with them very closely on many occasions despite having our differences over the years.”

Prior to starting up the station, Van Winkle was doing video and radio production work, where he created numerous television commercials and corporate videos in the 1980’s.

“A lot of corporations were looking to have videos created back then,” he said. “It was really important because that was the new medium. I had to express exactly what their business was all about in roughly five to seven minutes. When I was doing those corporate videos, I wanted to get into television but you couldn’t get into NBC, ABC, or Fox or CBS because those stations were highly competitive marketplaces.”

Additionally, Van Winkle noted that the goal of his television station has always been to help individuals learn the career while expanding their hands-on experience through a small market station.

He noted the station opened up the door for people to gain experience through a smaller market station, in order to move on to larger markets, allowing the individual to become a better-qualified candidate.

“Eventually, they can be employable for those top 50 markets,” he said. “It was really important for us to have the ability to give them that kind of experience each day, and that’s what we do. It’s also the perfect arena for people in the realm of entertainment who want to slow down. They weren’t exactly looking for a full-time position, but they were looking for something that they can come in and still contribute their respective talents. I have always said this is perfect for somebody who is just entering the industry, as well as those who are looking to slow down.”

Van Winkle also spoke about the programming viewers now have access to, 24 hours a day, seven days a week.

He said in order to the product to the viewer, he decided to put out the product on four different formats, being television, FM radio and social media, including YouTube and Facebook.

“With all four mediums, you have the opportunity to get your local news,” he said. “In the next 30 days, we will take 95.9 FM off the air, but leave it on as a message which tells listeners the channel has moved to 103.1 FM. We are going on our fourth transmitter since we opened the doors. We started with a 100-watt transmitter, then it went up to 500 watts. We are now on a digital 15-kilowatt transmitter, but soon we will go to a larger 30-kilowatt transmitter which is going to take the signal even further. We just received the new transmitter in a crate and we will be installing it sometime in October.”

In addition to the communications aspect at the station, the facility also houses a professional recording studio.

“It’s called RAVE, which stands for Ronda Annette Van Winkle Entertainment,” he explained. “We are actually looking at building it up in 2018, where we will completely rebuild all of the equipment and infrastructure with up-to-date technologies.”

Though Van Winkle owns the sole television station in the valley, he decidedly believes there is still much competition in town.

On the issue of what the viewer can watch on KPVM, Van Winkle is proud of his programming.

Van Winkle also touted KPVM Television is the only local free entertainment of its kind in the valley, unlike subscribing to other broadcast services.

“It’s very simple to receive KPVM programming,” he said. “On the back of all televisions is a port that says RF, which stands for radio frequency, or an antenna. All you have to do is install an antenna or rabbit ears. With anyone else, you would have to actually subscribe to their services, such as Dish TV or DirecTV. We have also submitted an application to double our power and it was approved.”

Regarding the future of KPVM, Van Winkle said he envisions the station without him at the helm.

On January 21, 2015, he suffered a massive heart attack, which he described as a “Widowmaker.”

“My cholesterol level is now at 90, which is great from what I understand,” he said. “At the time of my heart attack, I was under too much stress. I needed to get away from the stress, so my goal is to get away from the day-to-day operations and put somebody in there. For me, there has been a lot of emotional ups and downs over the years, where I see people that I love and care for come in and eventually leave. It’s difficult to enter into these relationships and have someone leave. In all reality, that’s one of the biggest challenges that I have.”

Reporter Selwyn Harris served as a news reporter and evening news anchor for more than five years at KPVM in the early 2000s.