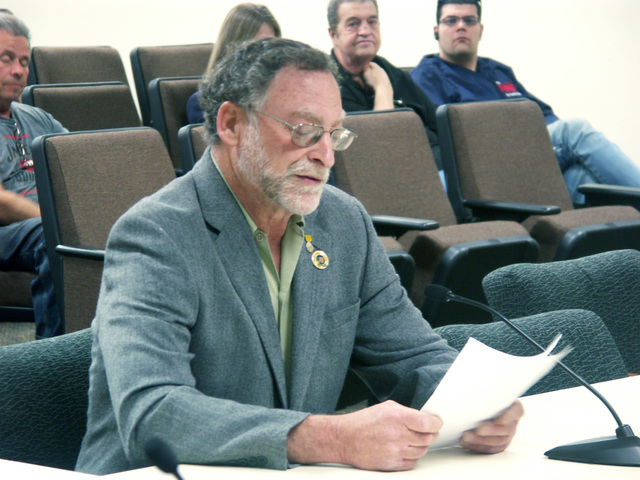 Pahrump Town Board Chairman Harley Kulkin does not intend to abandon his elected position quietly.

In a move that raised a few eyebrows during Tuesday’s town board meeting, Kulkin said he is embarking on a last-ditch effort to incorporate the Town of Pahrump.

The chairman assured the room he was speaking as a private citizen and not an elected town board official as he made his announcement seated before the board during public comment.

“I feel that the vote of the people to remove the unincorporated form of government was a big mistake,” Kulkin said. “I think it was a serious mistake for the future of the young people, I think it’s detrimental to the positive future of Pahrump. I want to announce that I am taking the lead on incorporation. I think the county’s plan for the Town of Pahrump is quite obvious. The major investments financially have been in criminal activity,” he said.

Nye County Clerk Sam Merlino said this week the Pahrump Town Board will not be on the ballot for this year’s general election as the board faces dissolution.

The filing period for candidates running for office this year begins on Monday.

On Tuesday this week, the Nevada Supreme Court denied an emergency motion for a stay filed by town attorneys this month.

The action was an attempt to halt the enforcement of a judgment issued by Judge Robert Lane on behalf of the county regarding 2012’s ballot question which voters passed by a slim margin.

Kulkin said the court’s denial had absolutely nothing to do with his announcement.

He also noted that he is spearheading a petition drive to allow voters to decide on incorporation later this year.

“I know we have to get to it pretty fast to get the petitions signed and everything in order so that we can have a ballot question. I have been on both sides of the fence and I know that it is not in the best interest of this community to allow the county to take us over. Incorporation won’t be shoved down anybody’s throat. It will be a vote of the people,” he said.

Board member Dr. Tom Waters this week agreed with Kulkin that it’s only fair to allow the voters of Pahrump to decide what they want for their community.

Waters noted that both board and staff were unaware beforehand of Kulkin’s announcement.

“It surprised everybody I think. It’s something that I know Harley is pretty passionate about. I will say that I don’t sign petitions. Every time any petition has come up that I was asked to sign, I always refused to sign any petition for anything but I felt as a town board member, I should not be signing petitions but if one comes up for incorporation, I will sign it. I just think that it’s only fair that the people of Pahrump should get to decide the future of our town,” Waters said.

Kulkin, meanwhile, also said he’s quite concerned about the town’s overall potential if the county were to assume total control.

“I believe very strongly that the county’s future for Pahrump is a community that revolves around criminal activity. The proof is that’s where they spend most of the money. We have a jail that has more beds than the Carson City jail. I am tired of picking up the newspaper where there seems to be nothing but drug problems and sex offenders. The sheriff is spending a million dollars over his budget and still can’t keep up with it. We are going in the wrong direction,” he said.

Additionally, Kulkin said one major hurdle in his effort requires educating local residents about what the town is responsible for in terms of infrastructure.

“So many people just don’t understand that we are only in charge of the parks, the cemetery, the fire department, the ambulance service and the town pool. There’s a small element out there with loud voices that don’t like the idea of the fairgrounds development and some of the other things we spend money on. They don’t seem to understand that government is a business and we are trying to bring outside money into Pahrump. That means instead of the full tax burden being on the citizens, most of it would be the result of increased tourism. Part of the government’s business is to provide services and the people want those services,” said Kulkin.

Kulkin also pointed out that his efforts to incorporate will not affect the entire town.

His efforts will focus on residents who live in the Mountain Falls community as well as the winery on the south end of town where more traditional neighborhoods exist.

Since his announcement, he said many local residents have come forward to offer support and even volunteer to help circulate the petition.

“It’s not to incorporate all of Pahrump because it will fail again just like it has before. The plan is to incorporate areas where the people living in those areas primarily want to incorporate. The only people who can vote on it are the people in the affected area. As soon as we can determine the boundaries we want to work within, then we would turn that into the county clerk to learn how many signatures are required. I do have two different attorneys that have offered help to make sure that we follow the new state laws and everything is done in a timely manner. The vote of the people itself will mandate that the area we defined will be incorporated. It will have nothing to do with the legislature. All incorporation simply means is the Town of Pahrump will have 100 percent control over itself,” he said.

Kulkin said he will provide more details about the petition drive in days to come.