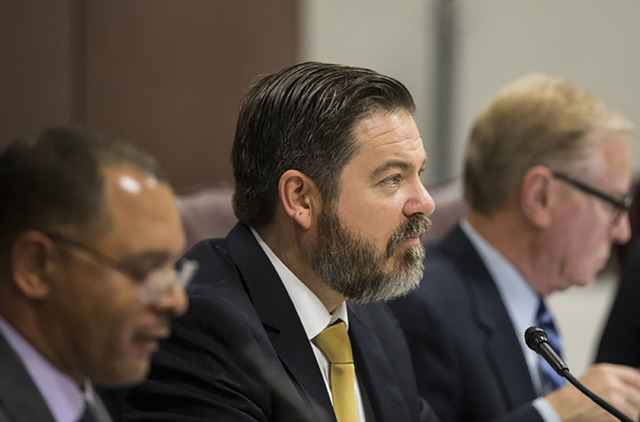 State Senate Minority Leader Michael Roberson wants to prevent any city or county in Nevada from becoming a sanctuary city for undocumented immigrants. Benjamin Hager/Special to the Pahrump Valley Times

State Senate Minority Leader Michael Roberson wants to prevent any city or county in Nevada from becoming a sanctuary city for undocumented immigrants. Benjamin Hager/Special to the Pahrump Valley Times

Senate Minority Leader Michael Roberson wants to prevent any city or county in Nevada from becoming a sanctuary city for undocumented immigrants.

Roberson, R-Henderson, plans to introduce a bill Monday aimed at blocking local municipalities from declaring themselves as sanctuary cities and counties, according to a press release.

Sanctuary jurisdictions typically refuse to cooperate with federal immigration enforcement by not holding undocumented immigrants for federal agents when those agents don’t have a warrant.

The issue is an increasingly polarizing topic in today’s political environment. Mayors and police chiefs in some of the nation’s largest cities, including Los Angeles, New York and Chicago, have said their cities will not cooperate with the federal government. President Donald Trump issued an executive order days after taking office last month that threatened to withhold federal funding to jurisdictions that refuse to comply with federal immigration regulations and laws.

No jurisdictions in Nevada have been declared sanctuaries. But Clark County Commissioner Chris Giunchigliani posted on Facebook last week that she planned on introducing a resolution to the county commission that would make it a sanctuary county.

“Commissioner Giunchigliani has decided that she will try to enact a radical, left-wing agenda by deciding which laws she believes should and should not be enforced. This flouting of the law is irresponsible,” Roberson’s statement said.

Giunchigliani could not immediately be reached for comment Monday.

The bill would allow the state to withhold funding to jurisdictions that refuse to cooperate with federal immigration authorities.

Cancela noted that Roberson voted in favor of previous bills that were seen as supportive of undocumented immigrants, such as allowing them to get drivers authorization cards and urging Congress to develop policies for comprehensive immigration reform.