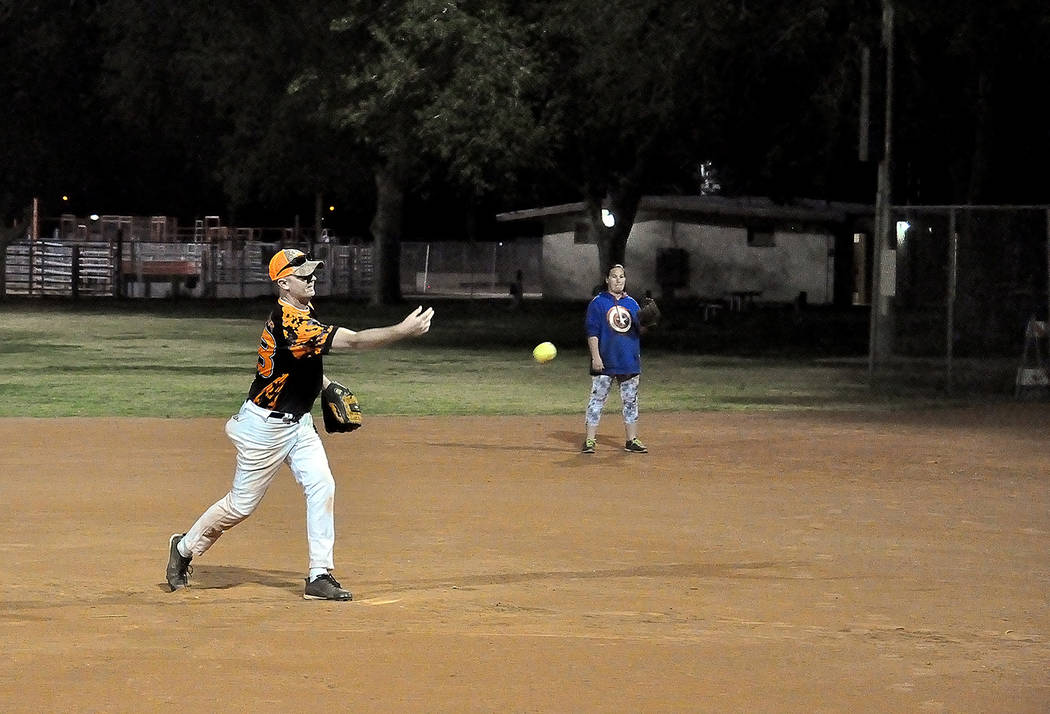 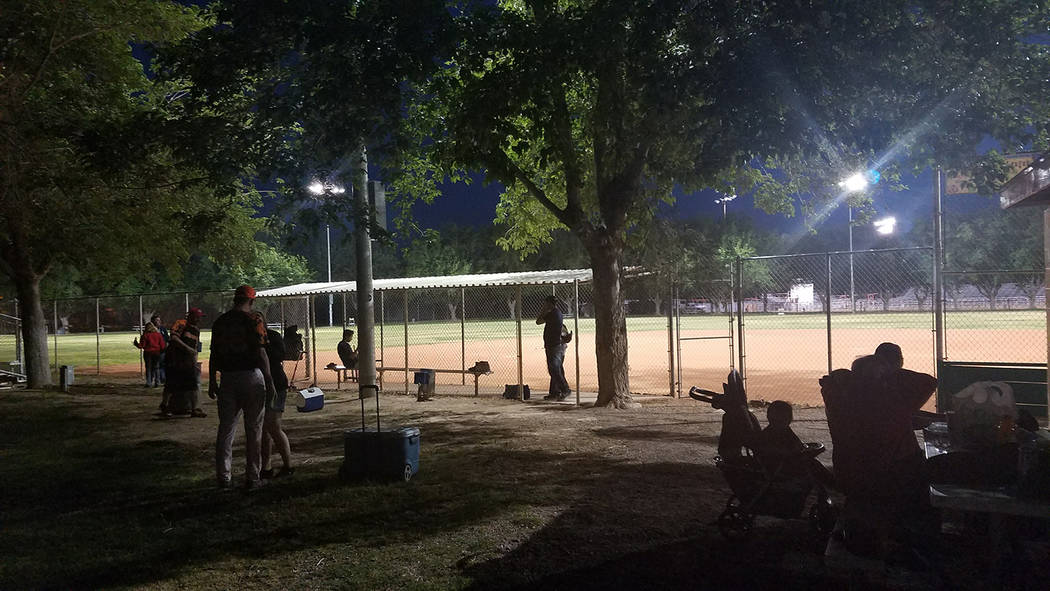 David Jacobs/Pahrump Valley Times A look toward one of the ball diamonds at Petrack Park in Pahrump where new lights shine on the ballfields in town. 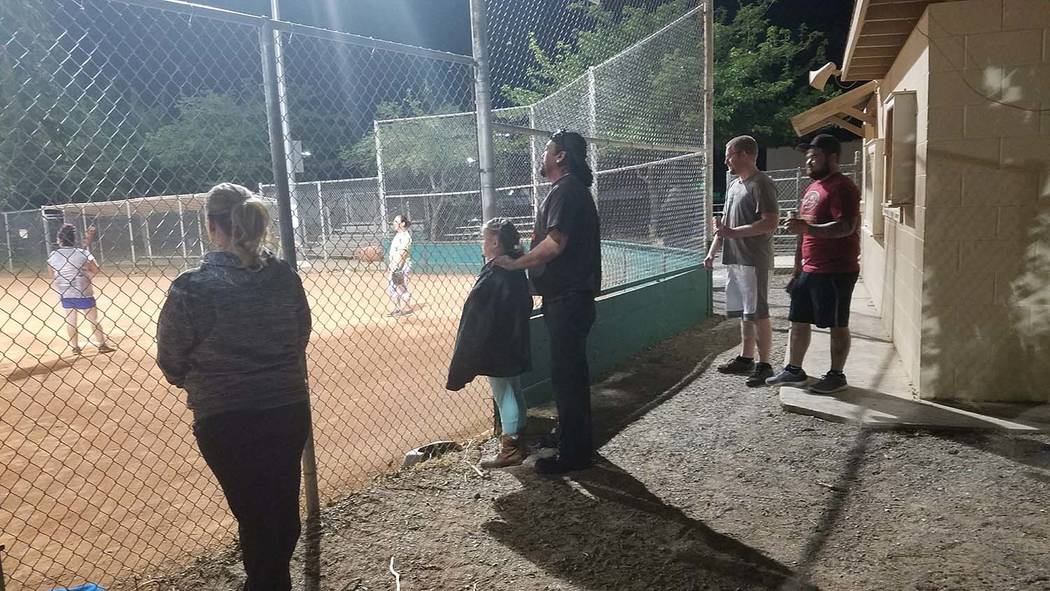 David Jacobs/Pahrump Valley Times People look out at a ballfield at Petrack Park in Pahrump where new lights are shining. 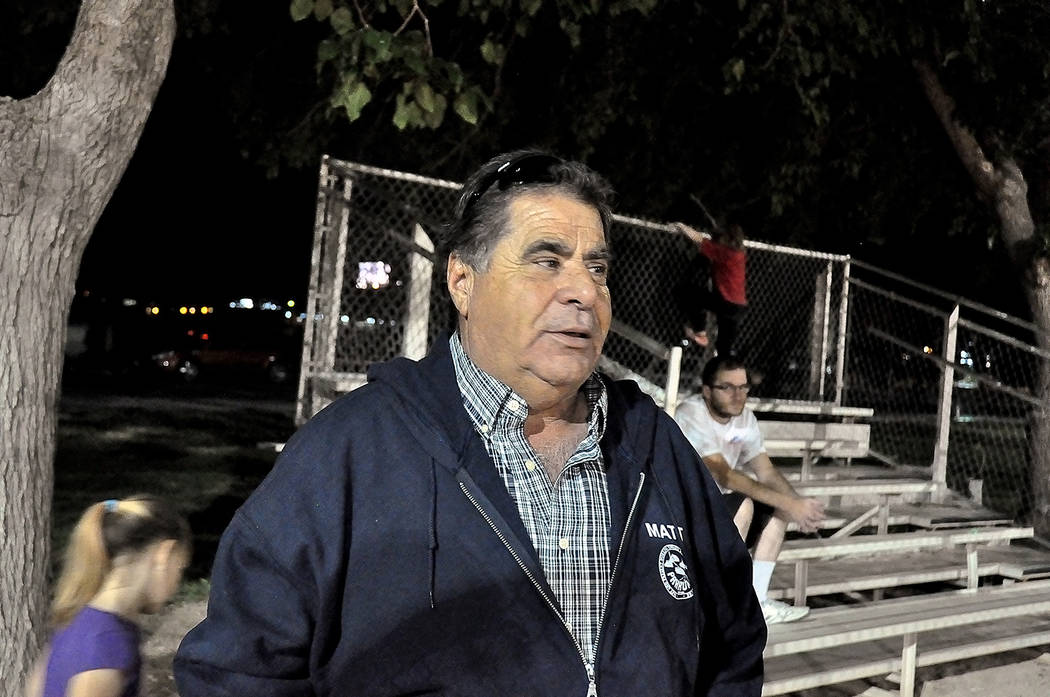 Being new to Nye County, I’m trying to get up to speed on all that its communities have to offer, including recreation.

One of my stops included a recent visit to Petrack Park in Pahrump.

I read and edited an April story by Selwyn Harris in the Pahrump Valley Times about an official “park lighting” ceremony on a ball diamond, at the park at 150 North Highway 160.

Selwyn’s opening sentence about Nye County officials heeding the “community’s request to let there be light at Petrack Park” caught my eye, along with an email from Nye County Public Information Officer Arnold Knightly asking me to stop by.

On a nice spring night, I arrived at the park to see it brightly lit. Players were taking batting practice, fielding ground balls and snagging fly balls in the outfield.

It made me want to get out there and play, but photos needed to be taken and interviews had to be done.

“Five years ago, we did the soccer field over there with the same lighting system,” said Matt Luis, buildings and grounds manager for the Town of Pahrump.

Industrial Light and Power, a local company, served as contractor for the project. The bid was $429,000 for the A and B fields at Petrack Park. Funds came out of the general fund with the project planned and budgeted in advance.

“This has been on kind of the hot list for 10 years,” Luis said.

“The B field had been out since last July because the field (lights) were condemned,” he said. “They were all wooden poles that were put up 30 years ago. The poles had all split. The cross-arms, they were all loose. The field lights were condemned and pulled down last July. The field was playable during the day.”

Fields A and B were the focus of the lighting project. Field C was outfitted with modern lighting five years ago.

Luis does not consider the latest work an “upgrade.”

“This was a necessity,” he said. “That field, Field B, was shut down since July for night play. Really without night play, leagues really can’t use the fields,” Luis said, because many participants don’t get off work until at least 5 p.m.

The latest project for the new lights started earlier this year.

Luis described the high-tech nature of the lights in terms of monitoring their usage.

“On the old field, we couldn’t tell what field was burning what. On this new system, we can. We can tell exactly how much each field is running.”

Luis describes the system as providing more for less.

“These lights here, even though there are twice the number of light fixtures, they are more energy-efficient than the old set of lights,” he said.

“Each pole on the old field had three lights, three little lights at 45 feet,” Luis said. “These lights have (multiple). The process is really cool. Each one of these lights, have a laser on it. They put a laser on home plate, and they just turn those poles until that laser clicks in, and it sets the lights into position when they are installing them.”

After the opening night, more fine tuning was planned by Musco Lighting System. “They will have the whole field gridded off, and they will meter the light, candlepower, per square foot on the whole field.”

As he spoke, Luis pointed to one field in front of him and what it will mean for young ballplayers.

“Little League could not play on this field because Little League’s national has the rules, and they (field) did not have enough lighting for safe playing for the Little League. Now they can play.”

The fields are designed for softball, though they could be used for baseball.

“There is no mound so that makes it tough for pitching,” Luis said of baseball use. “Softball does not have the mounds.”

Diane Roberts, president of the Pahrump Valley Adult Softball League, said that the league fields between eight and 12 teams during a season.

She describes the new lights as “incredible.”

“Before when you out there in that outfield, you couldn’t even see those players out there,” Roberts recalled. “It was so dark. We are excited. We had only one field to use last season. We had men’s, women’s and coed teams, and we ran all of them off this one (field). It was kind of a nightmare.”

She praised Luis with the town.

“Matt always takes care of our leagues. He does an excellent job with the fields so the lights were just a good bonus.”

“I’ve played out there, and I’ve been hit in the head with a ball, not being able to see or being blinded by the old lights. Now you can actually look up and not be blinded. I think it will be good. I think you will see fewer injuries.”

Neal and Roberts expect the benefits to extend beyond softball to the multiple special events held at Petrack Park.

“With the Harvest Fest, the Fourth of July Festival and the Balloon Festival, I think the lights will do really, really well,” Neal said. “I am really happy with them.”