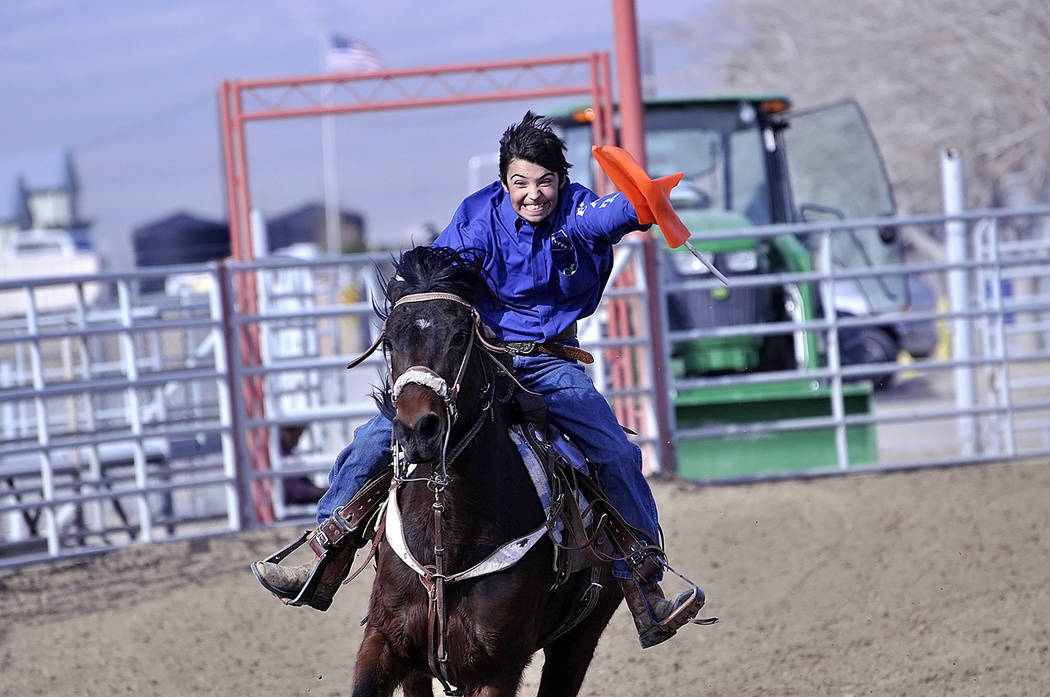 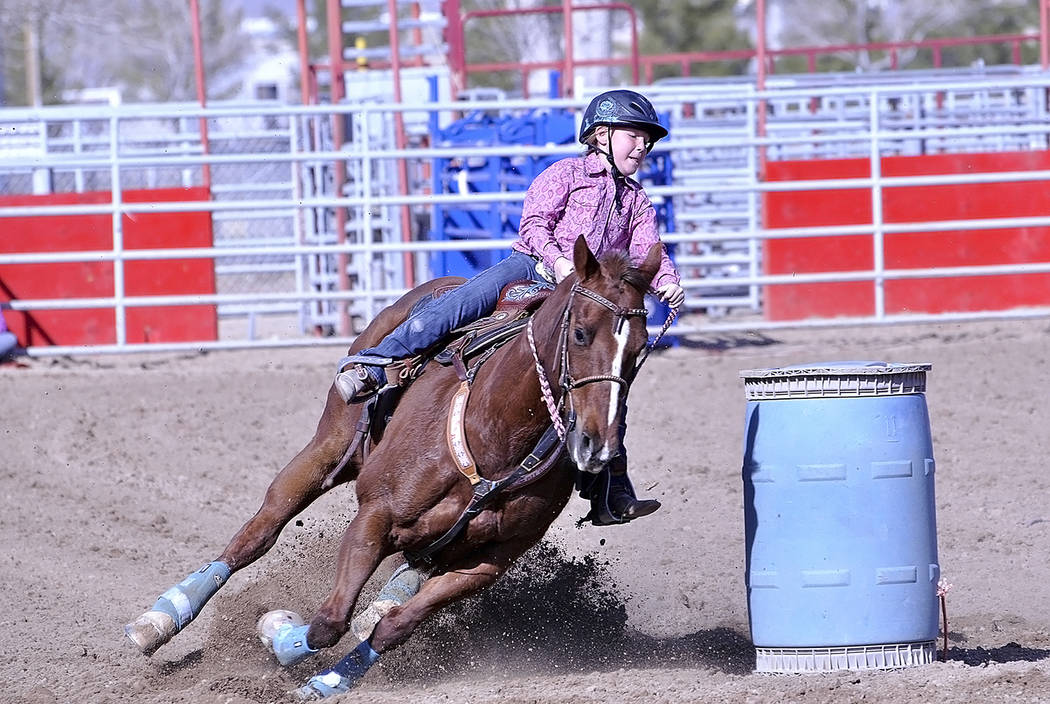 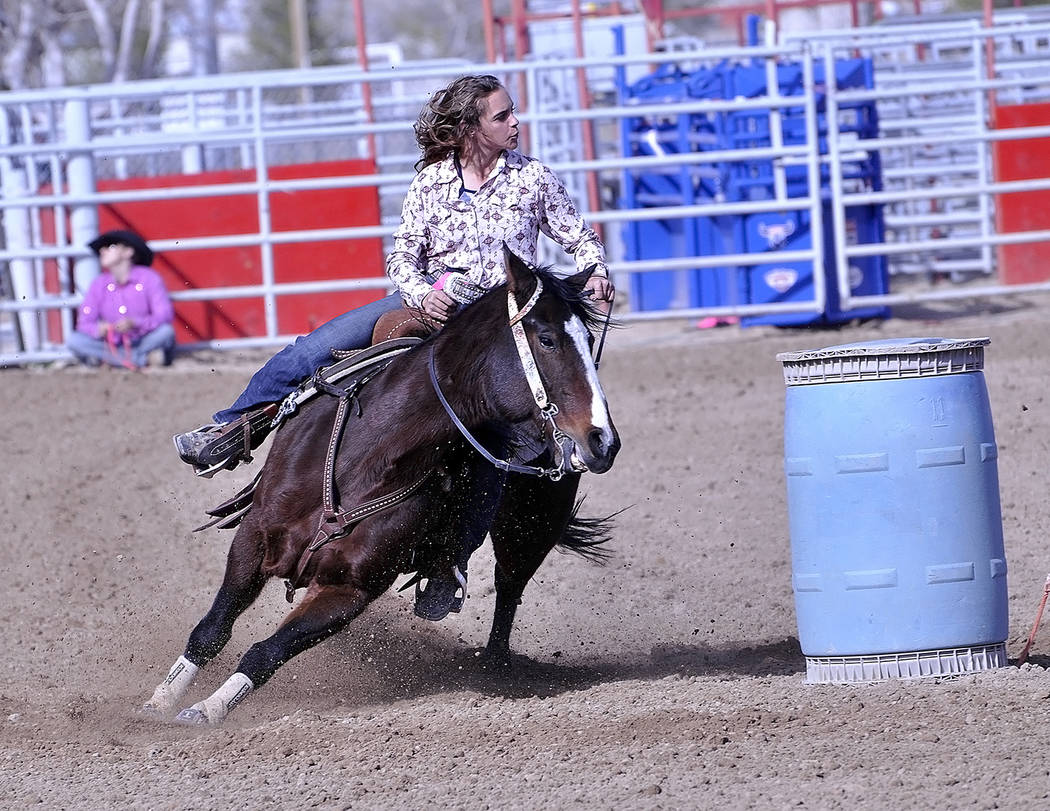 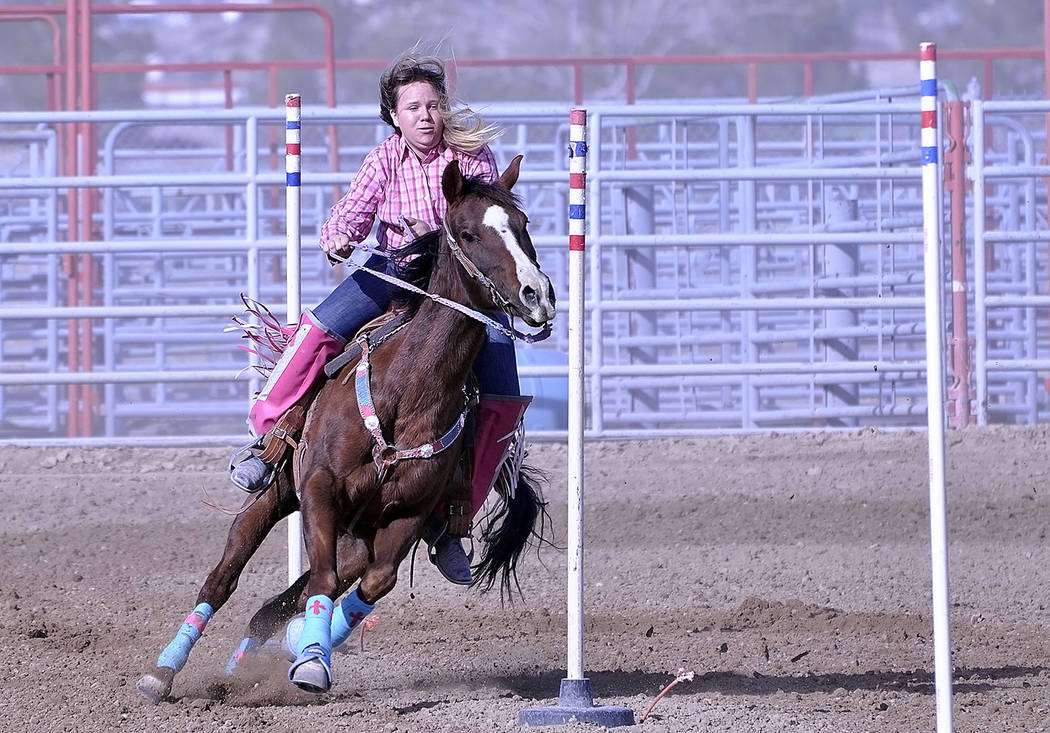 Horace Langford Jr./Pahrump Valley Times - Pole bending was yet another competition the youth were able to participate in. Karen Young is shown directing her horse through the obstacle. 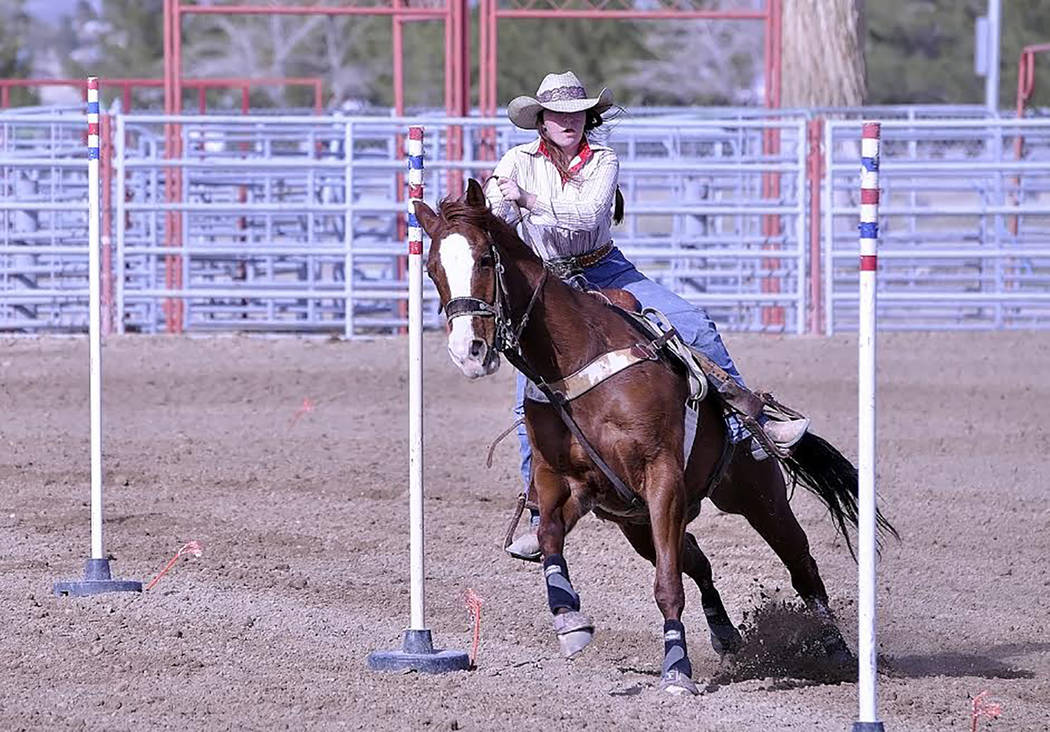 The 2017-2018 National Little Britches Rodeo Association season is in full swing and Pahrump Valley youth were able to show their skills in their hometown this month, alongside competitors from around the U.S.

The dirt was flying as the Little Britches participants took over the McCullough Arena at Petrack Park on Saturday and Sunday, Feb. 10 and 11, taking part in four separate NLBRA Wild West rodeos over the two days.

The National Little Britches Rodeo Association was founded in 1952 as an organization specifically for youth five to 18 years of age. Today, it spans all across the United States, encompassing more than 500 sanctioned youth rodeos in 33 states each year.

Nevada is just one of the many states to host official Little Britches events. Pahrump joined the list of sanctioned sites roughly a year and a half ago under the title of the Wild West franchise, giving the valley’s cowboys and cowgirls the chance at glory and even cash awards and scholarships through membership in the national association.

NLBRA Wild West Franchise Secretary Kjester Buesig said the rodeos held Feb. 10 and 11 were a fun and exciting time for all and the turnout of competitors was one of the largest the local franchise has ever seen, with more than two dozen participants.

“That was the biggest rodeo that we have had since I started the franchise,” Buesig enthused following the event. “We had 29 competitors, and we had two Little Wranglers competing as well, who are in pursuit of Rookie of the Year so they were in deep competition. It was a lot of fun.”

Buesig explained that she had been prompted to start a local franchise by her daughters, who wanted to take part in Little Britches.

However, the nearest franchise was in Sandy Valley and Buesig said there was no guarantee that location would host enough rodeos to allow her daughters to qualify for the Little Britches National Finals. So she decided to get together with a group of other rodeo parents to establish the Wild West franchise, which has already hosted approximately eight successful weekends of rodeo competitions.

“We do weekend events that consist of four rodeos per weekend, two each day,” Buesig said. “That helps because it’s not just competitors from here in Pahrump, there are people that come in from Utah, Texas, Arizona, from all over. Having four per weekend helps them get a lot of rodeos in at once and makes it more economical to compete.”

Buesig remarked that she finds rodeo to be a wonderful teaching method for young children, giving them a firm understanding of responsibility and perseverance. “They have to care for an animal, from the beginning to the end, they have to learn how to feed it, how to keep it healthy, how much that all costs. And they have to spend a lot of time working at it. It is a lot more work than just showing up to the rodeo. It takes a lot of practice and a lot of dedication,” Buesig said.

Dedication is indeed required if participants in Little Britches hope to head to the national competition. Throughout each of the franchise events that take place annually, Little Britches contestants garner points in the hope of being able to compete in the National Finals Rodeo. To qualify for the 2018 National Finals Rodeo, members must place five times in the top seven at any of the franchise rodeos held through the season.

According to a representative of the National Little Britches Rodeo Association, the results for all sanctioned events are posted to the association’s website within eight days of the event. To view the results of the Wild West franchise events or any other event, as well as for more information, visit www.nlbra.com.

For more information on the NLBRA Wild West Franchise contact Buesig at thebuesigs@aol.com or 702-374-2146.