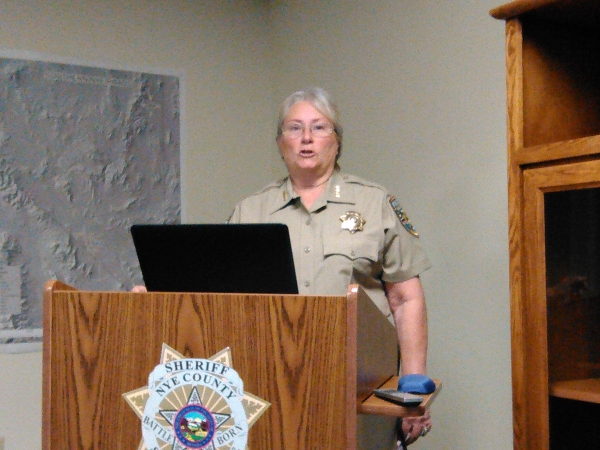 Four members of the Nye County Sheriff’s Office have returned to duty after being cleared in an investigation into the death of a man detained by deputies in Beatty last month.

Sheriff Sharon Wehrly held a press conference on Friday providing details on the man identified as Joshua Coats, 41, of Washington.

The officers who had be placed on administrative leave were detectives Michael Eisenloffel and Logan Gibbs, and patrol deputies Travis Buffi and Allen Lynn.

Wehrly said Coats was driving from either Washington or Oregon to New Mexico where his wife is now living.

Authorities first made contact with Coats at a Motel 6 in Beatty, where Wehrly said Coats’ erratic behavior was the reason why deputies were summoned to the business back on August 14.

Coats died not long after he was placed in restraints.

Though the cause of death was classified as a homicide, the officers involved were determined not to be at fault following a joint investigation by Nye County Sheriff’s Office and the Las Vegas Metropolitan Police Department.

The man’s is still under investigation.

Wehrly said the man was under the influence of prescription medications at the time of his death when he made a call to Nye County dispatch at 11:30 p.m.

“The reporting party, also the decedent, called 911 several times and reported such things as a little girl being attacked by dogs and that CSI was also on scene investigating some type of shenanigans and so on,” she said.

While officers were en route to Beatty, dispatchers received multiple calls from private citizens who said Coats was attempting to light the propane tanks on fire at the location.

“He was yelling and being very belligerent,” she said. “Beatty ambulance personnel were also dispatched to the scene and the responding officers discovered Coats throwing rocks and acting in a threatening manner. The officers decided to take Coats into protective custody for medical treatment and devised a plan.”

The plan, according to Wehrly, was to place Coats in what’s known as belly chains prior to transporting the man, for the safety of himself and emergency personnel.

Wehrly said Coats was passively resisting and was placed in a face-down position on the ground.

Once he was under control, it was decided by the officers to place him in the restraints so the man would be more comfortable during the long ride to a medical facility.

“Beatty is quite a ways away from any medical facility,” she said. “During the application of the belly chains, it was discovered that Coats was in medical distress. Medical attention was immediately provided by the Beatty ambulance crew, and Mercy Air was requested. Medical attention was provided but Coats ultimately expired as he was being attended to.”

Coats was transported to the Clark County Coroner’s Office where an autopsy was performed.

The coroner ruled the in-custody cause of death as homicide.

“It is taking a human life of one by another,” she said of the definition. “The definition does not differentiate intent, malice or accident. I was just on the phone with the Clark County Coroner and he told me that was actually a medical, legal definition of homicide.”

As a result, Wehrly said the investigation was handled with the assistance of Clark County officials.

Once the coroner ruled the death as homicide, she felt it was best to let an outside agency handle the investigation.

The team’s findings, which included reviewing video from the incident, showed there was no evidence of excessive force.

Wehrly also said the video depicts officers attempting to control Coats by controlling his arms and his legs.

It also showed the officers applying restraints to Coats.

“Since there was no evidence to suggest that there was any wrongdoing on the part of the officers, they would not need to be placed on administrative leave,” she said. “I placed them on administrative leave as soon as I found out that this was going to be a homicide investigation. The officers were immediately returned to duty and the investigation is still ongoing.”

“It was an acute condition of whatever medications he was taking and he also had some kind of congenital heart problem and then the restraints,” she said. “He was about 41 years old and he was not obese. Any additional findings will be shared with the public. At the conclusion of the investigation the entire case will be presented to the Nye County District Attorney for a legal opinion.”

It’s unclear why Coats chose to drive to New Mexico via Nevada from the Pacific Northwest, as a more direct route would have taken him through Idaho then on to Utah which borders New Mexico.