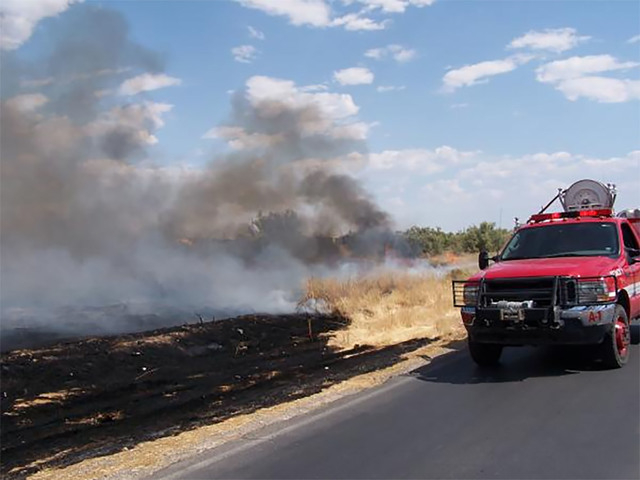 Pahrump Valley Fire and Rescue Services have implemented summer restrictions on burning weeds and brush throughout the community.

Fire Chief Scott Lewis said the burn moratorium began on the Sunday before Memorial Day and continues throughout the summer season.

“We had a long-range forecast which showed us that the temperatures are going to rise drastically,” he said. “As we have experienced previously, we are going into our second week of triple digits. We knew that was coming and we put the moratorium in place just in time.”

Lewis also said his crews have responded to numerous brush fires along with many instances of unauthorized burning, which appeared to be the cause of some of those brush fires.

“We want to remind folks we are going to be monitoring this and enforcing it diligently,” he said. “It is a zero-tolerance policy. We don’t want to see anyone get hurt or any accidental structure fires.”

Additionally, Lewis said the dry conditions around the valley due to the rise in temperatures have created a ‘tinderbox’ setting.

“We are seeing fires that are being ignited by very little ignition sources such as people welding and other things along those lines,” he said. “It has become very dry and it’s only going to get worse over the next several weeks and months.”

The dry conditions are also a big concern for state and federal agencies this year, as the U.S. Forest Service, along with the Southern Nevada District of the Bureau of Land Management have enacted their respective summer fire restrictions which began last weekend.

Those setting off fireworks, firing tracer-round ammunition, or operating an off-road vehicle without a spark arrestor are also in violation.

“Basically it states that there’s to be no wood or charcoal fires anywhere on all of the federal lands managed in Southern Nevada, although each federal agency’s restrictions will be slightly different,” he said.

“If you are going out to the lake, it will be different than Red Rock or Mount Charleston, so people need to check accordingly.”

“The last few years, we have been going in around May 15th or 20th, but this year with all of the late spring rains, we are going in a little bit later,” he said. “As far as Southern Nevada as a whole, the grass crop is much greater than it has been. That is certainly a concern, especially in some of the rural communities where there’s a lot of grass right now. Residents need to be really careful and they can get additional information from Pahrump Valley Fire and Rescue Services.”

BLM’s Zachary Ellinger is the fire mitigation and education specialist for the Southern Nevada District.

“The important part is to just check and know what the restrictions are before you go out,” he said. “The difference between the Forest Service and the Bureau of Land Management are not much. The penalty for breaking the law on public lands differs from agency to agency, but for the most part, we are trying to prevent the same things from happening, which is human-caused fires. Both agencies respond to every incident unified.”

Ellinger also said homeowners can help firefighters by creating defensible space around residences and other structures.

“People can take individual responsibility to reduce flammable materials around their homes and communities before a fire occurs,” he said.

“No human life is worth a home or structure, and we will not risk firefighters’ lives to save indefensible homes and structures.”

Ellinger, meanwhile cautioned about a trending hobby among many residents of Southern Nevada – drones.