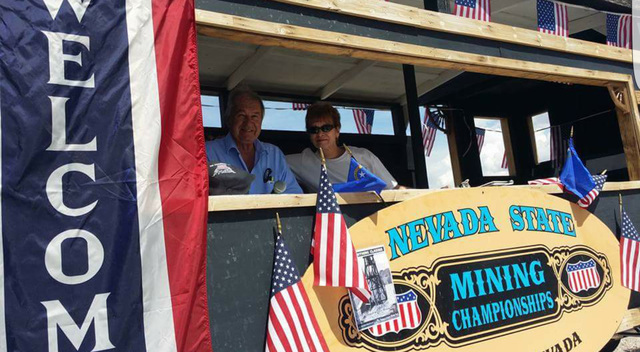 Joni Eastley, right, as shown with Bob Perchetti, left, in the announcers booth at the Nevada State Mining Championships on May 28 in Tonopah's Historic Mining Park. Eastley said last week that she was resigning as assistant county manager Sept. 2. Eastley plans to remain active in the Tonopah community. David Jacobs/Times-Bonanza & Goldfield News

A longtime Nye County government official from Tonopah is resigning, ending more than 15 years of service.

She declined to specify why she was leaving the position.

“People resign from jobs all of the time for different reasons,” she said.

“I am not retiring. I am staying in the Tonopah community. I am committed to the success of Tonopah now and into the future.”

Asked if she had another job lined up, Eastley, 61, responded: “I have had several interesting phone calls. I am not sure what I’ll do yet.”

Eastley was a county commissioner from 2001 through 2012 when she faced term limits.

Within a short time, the county hired her as assistant county manager.

“Then I did that from January of 2013 through today,” Eastley said.

“I have appreciated the opportunity to contribute,” she said.

In November 2015, Eastley began a four-year term as a commissioner for the Nevada Rural Housing Authority Board, according to a biography of her on the board’s website.

“By her own admission, Joni Eastley has a ‘servant’s heart’,” it states. “Her career has been built on community service; her free time is filled with volunteer work …”

Eastley moved from Ohio to Nye County more than 30 years ago.

Before becoming a Nye County commissioner, she spent 14 years working in the mining industry in various human resources positions, the biography states.

Eastley also is chairwoman of the Central Nevada Regional Water Authority, a member of the Nevada Airports Association Board and Nevada Automotive Affairs Advisory Board.

Eastley is past president of the Nevada Association of Counties. She currently is a member of the emeritus committee of the counties’ group.

Active in Jim Butler Days and the Nevada State Mining Championships, Eastley recently appeared before the Tonopah Town Board to present an award to resident Lisa Westerlund for Westerlund’s efforts on behalf of Butler Days.