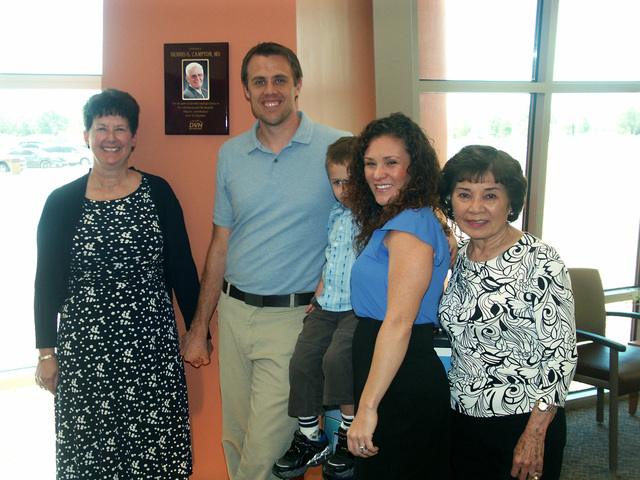 “A doctor’s doctor” best describes the career of a man who devoted his life to saving other lives.

Dr. Dennis Campton, who passed away earlier this year, was memorialized by family and professional colleagues during a brief ceremony at Desert View Hospital on Thursday.

“He was bigger than life and what he did for this community. He didn’t do it for a pat on the back. He did it because he truly loved his patients, the community and everything about Pahrump,” she said.

Nearly anyone over the age of 50 can recall a common practice most doctors were committed to – “house calls.”

Campton’s wife said her husband, on more than one occasion took the action a step further in recent years.

“When he came out here in the 60’s, he did everything. Mankins Texaco was where the Bank of America is now and he delivered a lot of children there at the gas station because there was no facility at all. If you were having a baby and you couldn’t make it over the hill, that’s where you ended up,” she said.

It is still unknown how many male babies were named “Tex” as a result of the Campton’s slightly unorthodox but necessary methods.

Gas stations aside, Campton made other so-called “house calls” for expecting mothers-to-be.

“Dr. Campton used to go out on Sundays and decide what patients he would see. He would hook up a buggy and a horse and take his black bag to see the patients. There were times where the patient could not afford to pay, Dr. Campton was offered a couple of chickens for payment and he would do that. One time he got a goat without knowing the goat was pregnant. That was his payment. He always did that whether people had money or not,” both employees recalled.

After moving to Las Vegas in 1963, he opened his first private practice with partner Dr. Jack Cherry, while having privileges at Southern Nevada Memorial Hospital.

Throughout the 70’s, Campton was Director of the Emergency Room at Humana Sunrise Hospital.

After retiring in 2000, the doctor was coaxed back into medicine. He was named Nevada Rural Hospital Trustee of the Year in three years ago.

When Nathan Adelson Hospice first opened in Pahrump in 1999, Tyann James, the agency’s Physician/Community Outreach Representative said he was appointed as its first Medical Director.

“He really has a special place in the Nathan Adelson Hospice family and that’s why I’m here. Dr. Campton was a truly dedicated man and we are all thankful for his great work in the medical industry,” she said.

Dr. Campton was a Korean War veteran, serving in the Navy and as a medical corpsman in the Marines after receiving his M.D. from Ohio State University in 1961.

He is survived by scores of family members across the country.