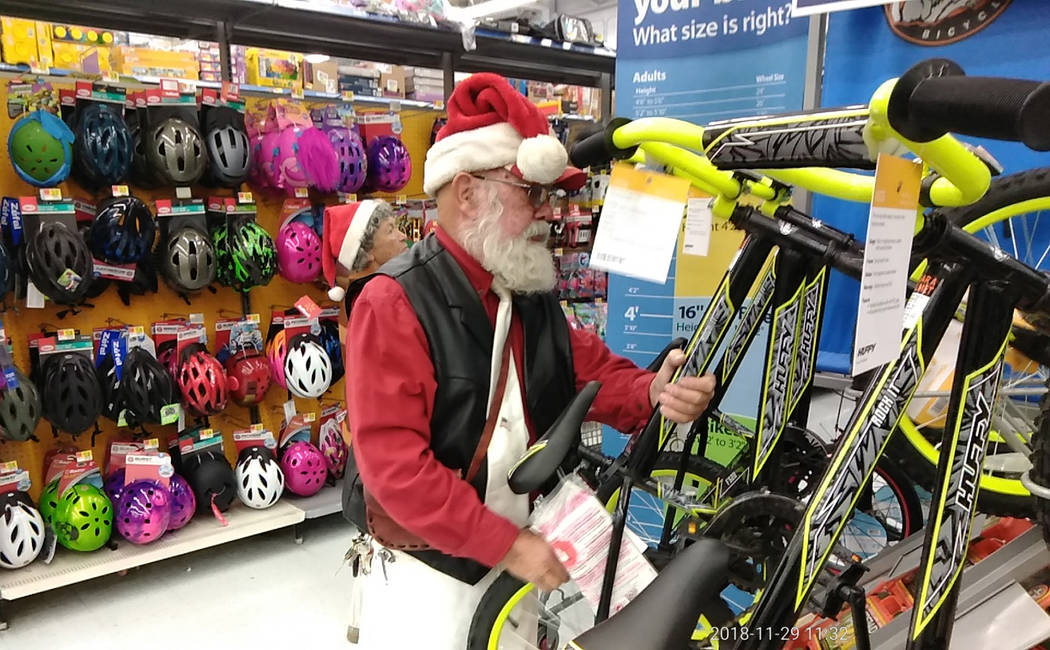 Selwyn Harris/Pahrump Valley Times A brand new bicycle is a gift every child looks forward to on Christmas morning. Fred "Santa" Summers made sure to note that no video games were purchased as he spoke of the importance of actual physical activities for kids everywhere. 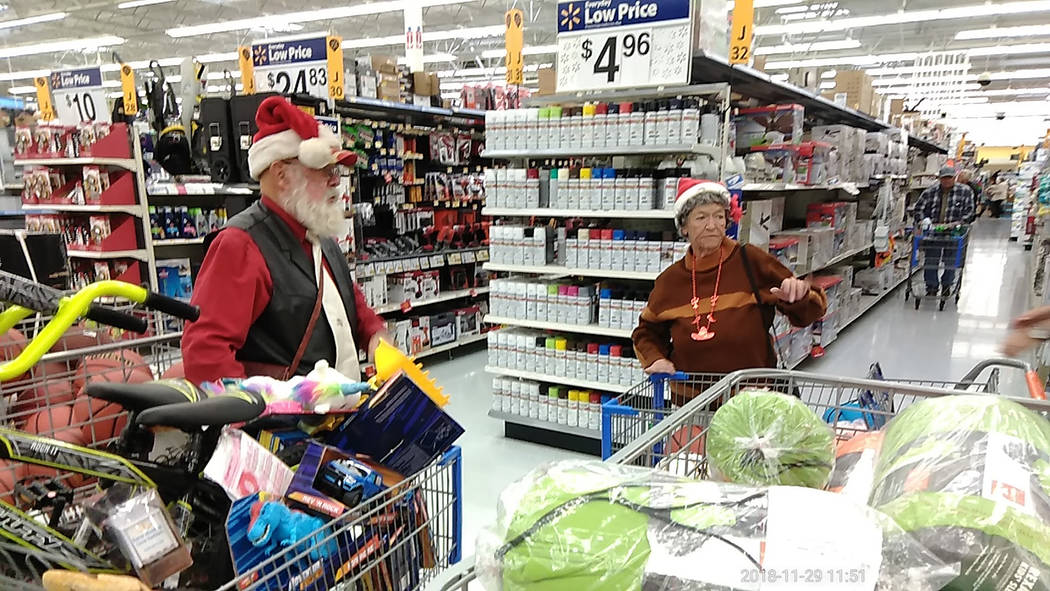 Selwyn Harris/Pahrump Valley Times Fred Summers and his wife Patty fill their shopping carts with a variety of toys during their Christmas shopping excursion at Walmart late last month. 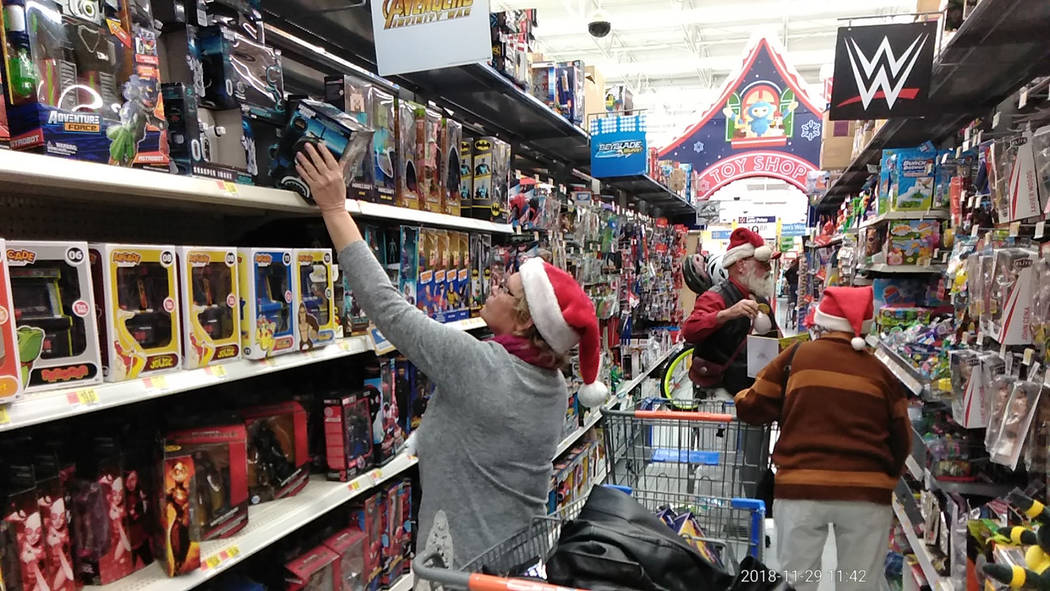 Selwyn Harris/Pahrump Valley Times Fred "Santa" Summers and his "elves" check out the shelves of the toy section at Walmart. Summers said his aim is to provide a toy for every child in the Town of Beatty this Christmas. 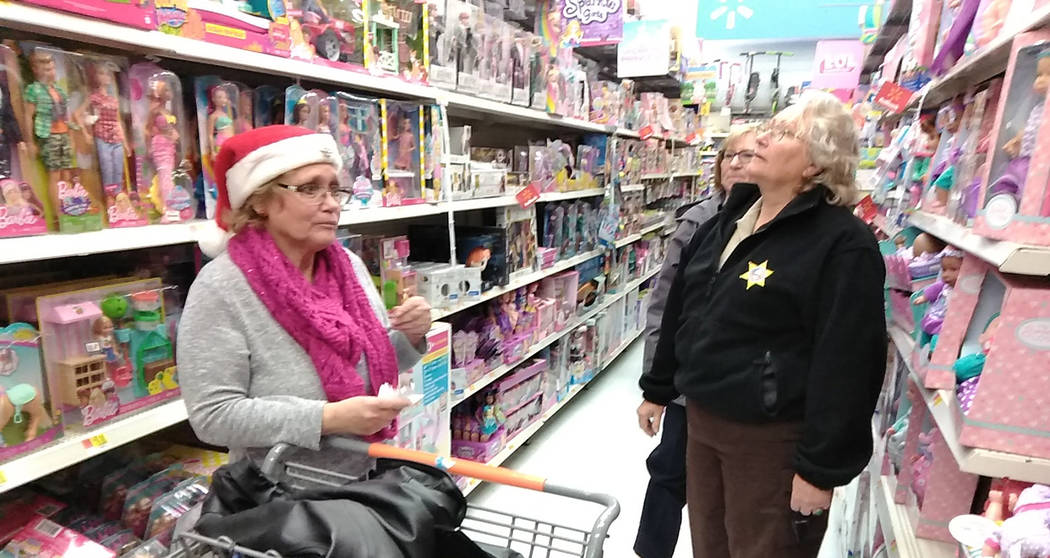 With his long white beard and jolly manner, not only does Beatty, Nevada resident Fred Summers look like Santa Claus, but he has also played the role of ol’ St. Nick for the past 10 years in the community roughly 70 miles north of Pahrump.

On Thursday, Nov. 29, Summers, along with his wife Patty and a small delegation of “elves,” traveled down to Pahrump’s Walmart to do a little Christmas shopping for all of the boys and girls in Beatty.

The last census count back in 2010, revealed that Beatty had a population of a little more than 1,000 residents.

“Every year we shop here at Walmart and give out the toys to all of the kids in Beatty,” he said. “Last year we had over 200 kids who received a toy. We do it every year for the benefit of the kids, because we really enjoy giving and we love to see the kids’ reaction when they get their toy. We don’t purchase any kind of electronic video games because we want the kids to get out and play, just like most of us did when we were kids before the video game era.”

Summers’ wife, Patty, noted that the couple has been performing the gift-buying ritual for the past 20 years.

“It’s been about 10 years here in Nevada and 10 years in Riverside, California,” she said. “It’s all about the kids for Christmas. Today we brought along some of our elves to help out and we have a van as well as a pickup truck to bring all of the toys back up to Beatty. Any of the toys that we don’t give away will go to our fire department, so it’s a win-win situation.”

Though some of the monies used to purchase the toys came about by way of donations in the community of Beatty, Mrs. Summers said much of it came from their own pockets.

Spencer Duclos, a nephew of the Summers, said the gift-buying delegation shops for certain gifts by way of age range and gender.

“We all have lists with the grade levels and ages,” he noted. “We’re buying toys for infants, all the way up to high school age. It really warms the heart to do this and obviously, the kids love it. Beatty is kind of a low-income area and everyone is like family. We have a small population, which allows us to get a toy for every kid in Beatty.”

Support from the sheriff

Nye County Sheriff Sharon Wehrly also dropped into Walmart, providing a donation to the benevolent cause.

“This is so wonderful and this is what Christmas is all about,” she said while browsing down an aisle. “It’s about giving and making people happy, especially the kids by letting them know that people care.”

Additionally, Wehrly spoke about another similar effort her office is preparing for this month.

“It’s through the sheriff’s office and the Pahrump Disability Outreach Program, and we are doing it all over the county,” she said. “We’ve got one going up in Tonopah for the northern area where all of those toys stay there. The toys that we get for the Beatty area will also stay in Beatty, and anything we receive here will stay here. Our dispatchers are augmenting that by locating people who are in need. We also plan on hosting some dinners for Christmas.”