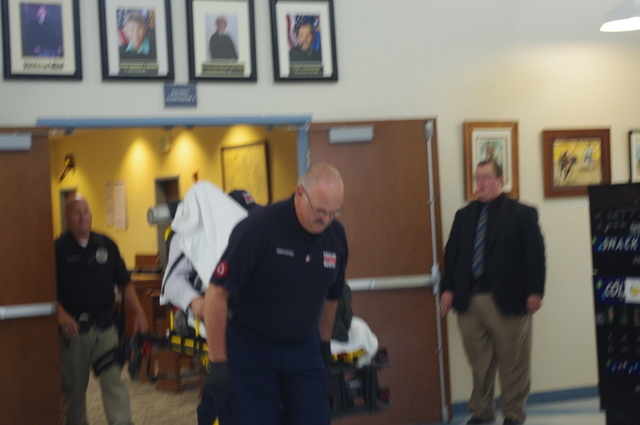 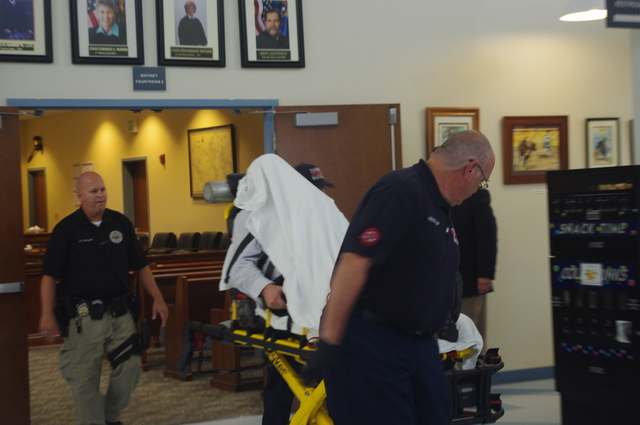 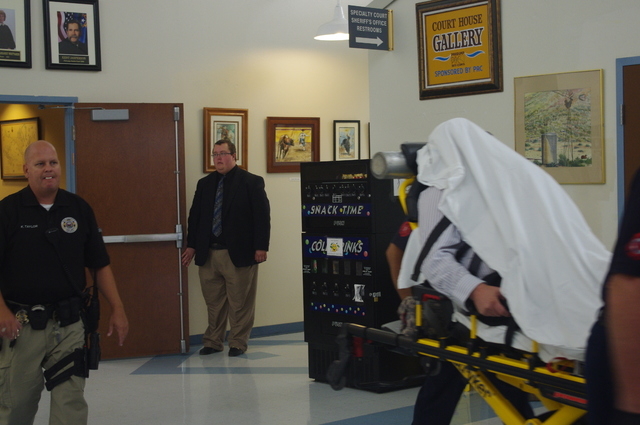 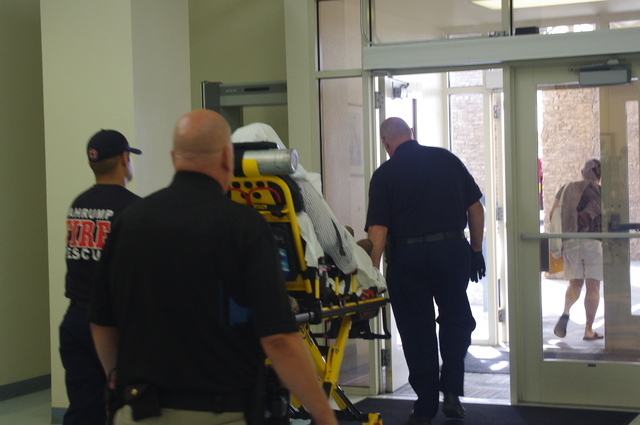 A man on trial in District Court on multiple child sex charges attempted suicide Wednesday, disrupting the judicial proceedings against him.

Jackie Lee Argabright Jr. was thought to be intoxicated when he showed up for court Wednesday morning. He was incoherent and somewhat disheveled in appearance.

The defendant is facing five counts of sexual assault on a child under 14 years of age. The charges stem from allegations made by two girls who say the defendant performed oral sex acts upon them and also forced them to perform oral sex acts on him.

After concerns were raised about Argabright’s sobriety and ability to assist in his own defense, the defendant was administered a preliminary breath test (PBT). Argabright was either unable or unwilling to complete the test and so was placed in handcuffs outside the presence of the jury.

The man was on his way to jail for the day on a contempt of court charge. But then he had an emergency medical episode and an ambulance was called to the courthouse.

Argabright was wheeled away on a stretcher, but by late afternoon he was being flown by helicopter to a Las Vegas hospital.

Sources in law enforcement say Argabright guzzled a near-fatal dose of antifreeze in the early-morning hours before he was to appear in court. His organs reportedly began to fail. The man was still alive Thursday morning.

Argabright’s defense attorney, Michael Becker, requested a mistrial on Thursday morning, but the prosecutor, Timothy Treffinger, stated that the defendant’s medical issues were due to his own actions, making the point that a mistrial should not be granted.

Judge Robert Lane denied Becker’s request and chose to continue with the trial, regardless of the defendant’s ability to return before the end of the week. Lane agreed the defendant’s own actions led to his absence in the courtroom on Thursday.

Closing statements are expected in the trial, which started Tuesday, by Friday morning.

Jaime Argabright described to the court how she felt when her husband was arrested.

“I didn’t know what to believe. I was in a state of shock,” she said.

She was also asked to describe her sexual relationship with her husband. She said it amounted to only infrequent intimacy.

“I took it as partly a lack of interest and partly something else,” she said.

Later she explained that part of the issue was her husband’s job kept him on the road for close to nine months out of the year.

The defense asked her if she would have stayed with her husband if she believed that he committed the alleged crimes; she said she would not have. The couple has been married 30 years.

Jonas was asked her impression of Jaime Argabright’s behavior during the police investigation.

“Not that she did anything that was uncooperative, but that she didn’t seem too receptive or accepting of what we were telling her,” the former deputy said.

The final witness to testify on Tuesday was Boruchowitz, who had a lengthy stay on the witness stand.

Boruchowitz testified that the second victim had recanted, in writing, during the investigation. He told the court that she later retracted the letter, but not until after she was arrested for filing a false report.

Boruchowitz explained that the decision to take the minor into custody was in the best interest of the child, because it was believed that she was coached to retract her allegations.

Argabright’s attorneys questioned Boruchowitz about phone interviews he had with the defendant at the time the allegations were made. Boruchowitz characterized Argabright’s answers as passive, neither admitting nor denying guilt.

Going through transcripts of the phone call between the detective and Argabright, the defense pointed out that Argabright stated, “I didn’t do it,” on numerous occasions during phone conversations. Boruchowitz continued to testify that Argabright’s demeanor was passive or non-responsive during interviews with law enforcement.

The detective has made headlines for the last 12 months, including in previous news reports detailing attempts by local defense attorneys to secure Brady material that could be used to impeach the detective’s testimony in court.

Outside the presence of the jury, Argabright’s attorneys had sought to present some of this information to the jury but that request was denied by Lane.

Argabright’s medical condition was unknown by press time. A verdict is expected in the case by late Friday.