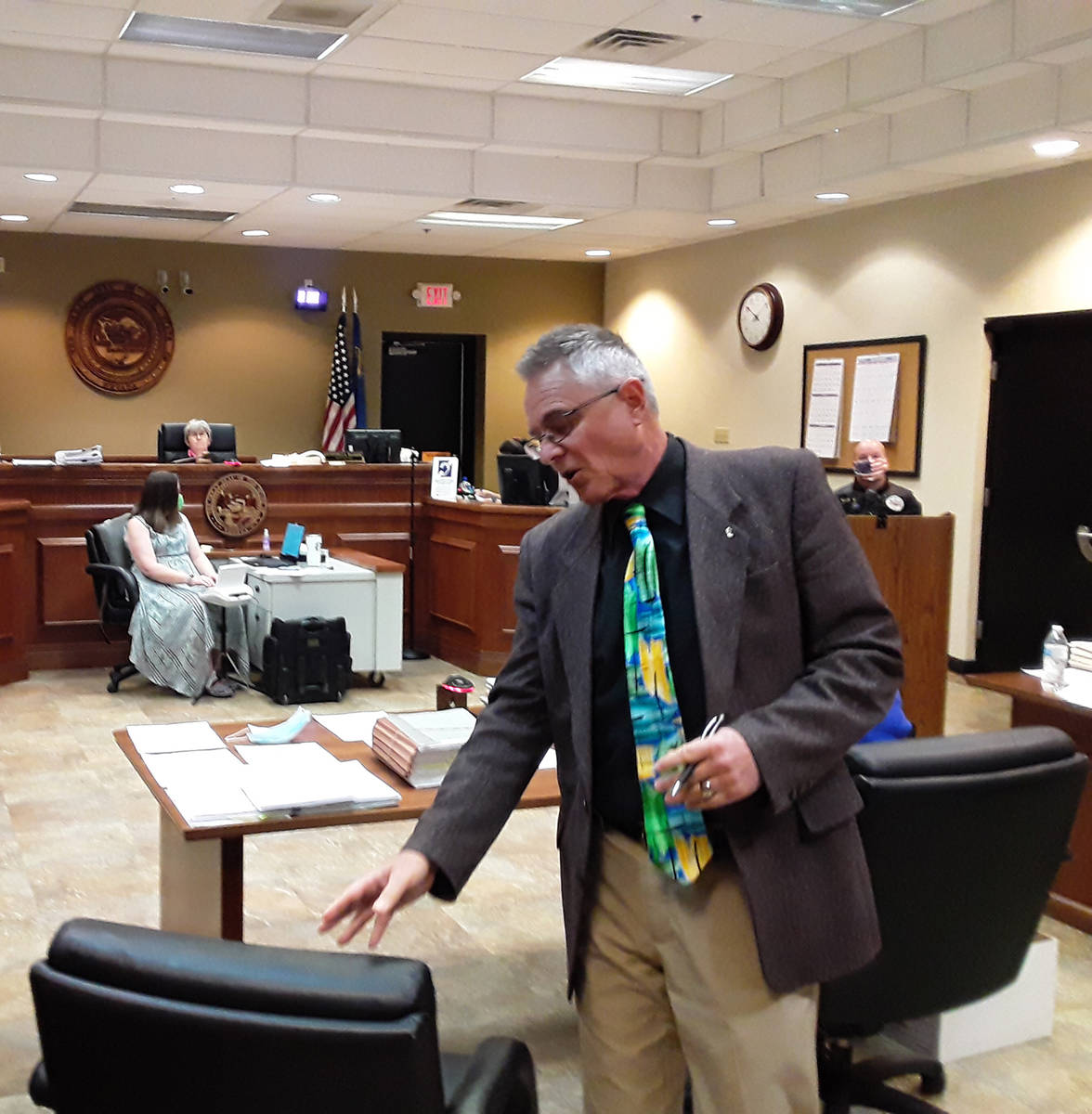 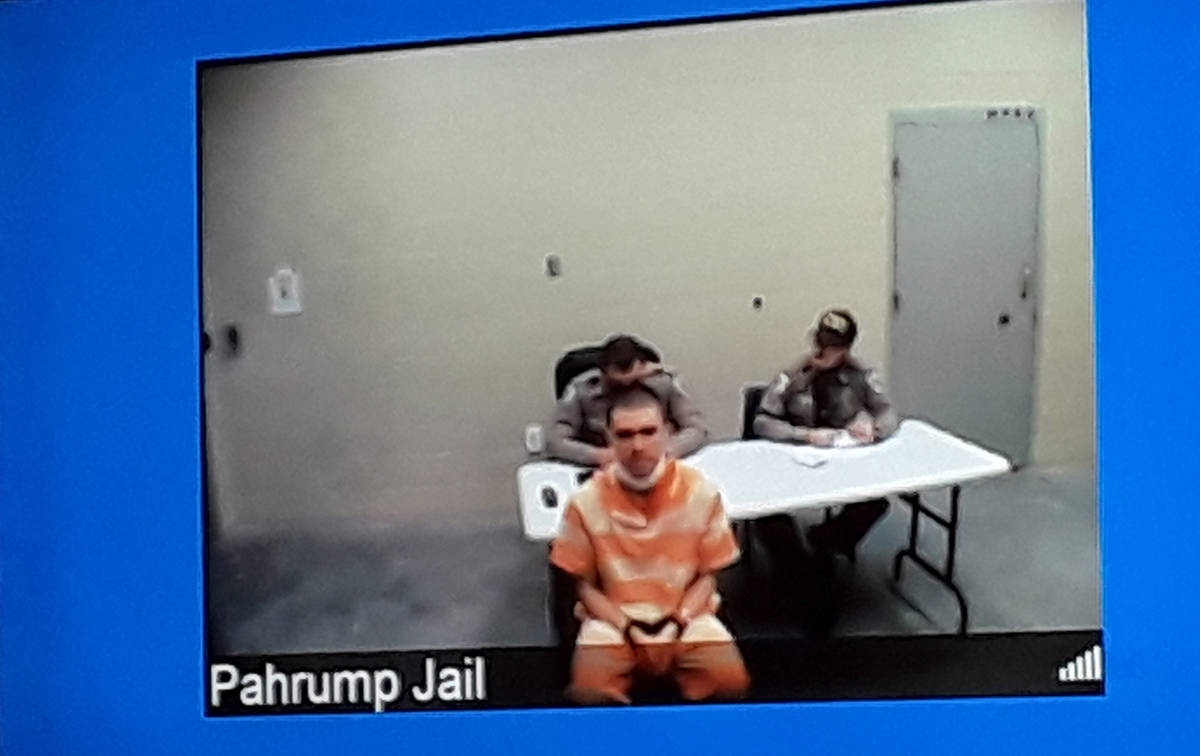 Selwyn Harris/Pahrump Valley Times Defendant Michael Wilson tearfully expressed remorse for his role in the murder of Dawn Liebig while speaking at his sentencing hearing. 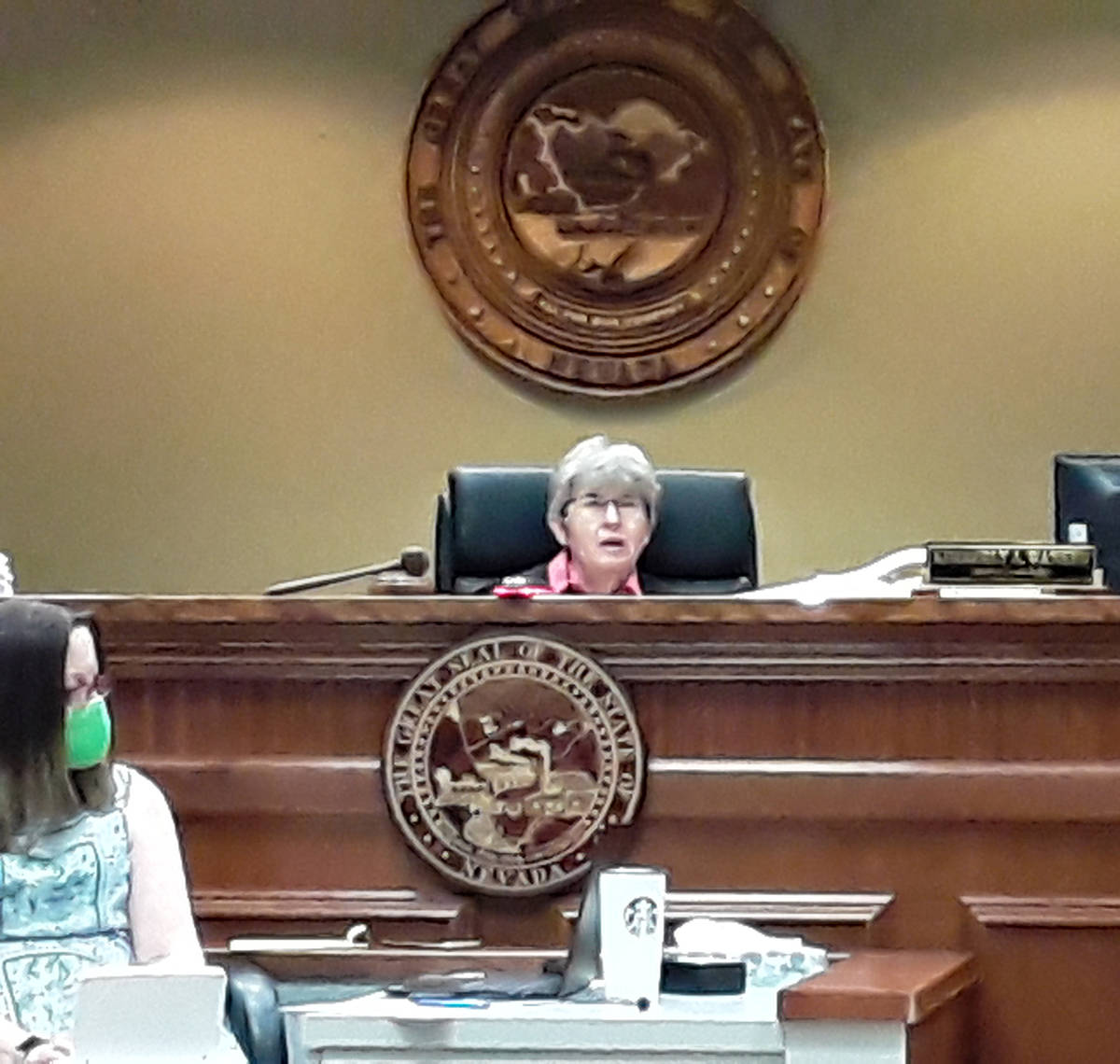 Selwyn Harris/Pahrump Valley Times Nye County Fifth District Court Judge Kimberly Wanker sentenced defendant Michael Wilson to a maximum sentence of 10 years to life for his role in the death of victim Dawn Liebig. Wilson also received the maximum enhancement sentence of eight to 20 years for use of a deadly weapon. Both sentences will run consecutively.

The teenager arrested and charged in the 2018 death of the woman who adopted him learned his fate on Wednesday, Sept. 9.

Nye County Fifth District Court Judge Kimberly Wanker sentenced defendant Michael Wilson, who was 17-years-old at the time, to a maximum sentence of 10 years to life for his role in the death of victim Dawn Liebig.

Wilson also received the maximum enhancement sentence of eight to 20 years for use of a deadly weapon.

Both sentences will run consecutively.

Wilson, and co-defendant Dakota Saldivar confessed to stabbing and beating Liebig, who was 46 at the time of her death because they did not like her parenting style, Nye County Sheriff’s Office detectives said. Saldivar is Wilson’s half-brother.

During the onset of the sentencing hearing, Wanker noted that Wilson was arraigned on amended information back in October of 2018, where he pleaded not guilty and waived his right to a speedy trial, thus the case was set for trial.

However, on Feb. 21 of this year, the state filed amended information, charging Wilson with second-degree murder, with use of a deadly weapon, which is a category A felony.

As a result, Wilson entered into a guilty plea agreement with prosecutors.

Wanker also said that the crime of second-degree murder leaves the court with only two sentencing options.

“The use of a deadly weapon is governed by Nevada Revised Statute (NRS), 193.165, which states that any person who uses a firearm or other deadly weapon in the commission of a crime shall in addition to the term of imprisonment prescribed by statute for that crime, be punished by imprisonment in the state prison for a minimum term of not less than one year, and a maximum term of not more than 20 years.”

During her remarks, Defense Attorney Ronni Boskovich sought to persuade Wanker to grant her client leniency, by requesting a definite term of 10 to 25 years in prison for the second-degree murder charge.

“For the weapon enhancement, we are asking for somewhere in the mid-range,” Boskovich said. “Either a three to eight, or perhaps a four to 10. Given all of the mitigating circumstances that I’m going to be addressing, I do believe that is a fair request offered by the defense today.”

Boskovich then told the court that for the past 14 months, she has had numerous conversations with Wilson.

“I have spent a lot of time with Michael Wilson,” she said. “I genuinely believe he is a genuinely good person. I know that it can be shocking to hear about somebody that has pledged to the crimes, but I believe that in his heart, he is a good person who did a bad thing.

During the conversations, Boskovich said Wilson talked about growing up in different homes where neglect and abuse was a common pattern.

“He talked to me about his past and some of the difficulties he has had in life,” she said. “He has been dealt an absolutely terrible hand in life. At the age of three or four, Mr. Wilson began being physically abused by his father. By the age of five, the physical abuse turned into sexual abuse. Mr. Wilson’s sister was also abused by his father. His father is currently in Lovelock prison, serving time on eight counts of lewdness with a minor.”

Boskovich also spoke about an instance where Wilson contemplated killing himself.

“He was so plagued by his past life and he was filled with anger, regarding the way he was previously treated by people who were supposed to care about him,” she said. “He was often despondent. When he was 13-years-old, he wrote a suicide note, and he indicated he wanted to kill himself because he felt unwanted. Absolutely, none of this information that I am mentioning here today is offered as an excuse for Michael’s behavior. We are simply detailing everything that Michael went through, so we may all have an understanding as to what caused Michael to be in the position that he is in.”

Additionally, Boskovich said her client has accepted responsibility for his actions.

“He has shown remorse and empathy and since Michael has been incarcerated, he has been consistently attending therapy,” she said. “Prior to being in custody, he had been in therapy on two prior occasions in his life, however, he didn’t find therapy helpful at that time. However, since he has been in custody, Michael has a new outlook on therapy. Mr. Wilson has assumed responsibility. He wrote apology letters to Dawn’s children well before I inherited the case over a year ago.”

Conversely, Nye County Chief Deputy District Attorney Kirk Vitto offered a different take on Wilson and Saldivar, as he reminded the court all of the circumstances related to Liebig’s murder.

“I know counsel has stated that Mr. Wilson was not the instigator, but it’s very clear that they were watching, and were waiting for the victim to go to sleep,” Vitto said. “They were checking on her, and then it was actually Mr. Wilson who attacked first, stabbing the victim in the neck with a knife, and when that didn’t work, then we had the rest of this offense.”

Vitto also spoke about Wilson and Saldivar’s claim that Liebig actually wanted to die, due to health reasons.

He noted that Liebig was suffering from multiple sclerosis, a brain tumor, and thyroid cancer.

“She was in constant pain,” he said. “At first, they told the police she was missing, then it was they assisted in her death because she said she wanted to be with her predeceased sister. As I pointed out earlier, Mr. Wilson advised that the victim was suicidal and asked them to kill her. They initially reported that they stabbed her to death at her request.”

Additionally, Vitto said that Wilson eventually admitted to detectives that he was sick of his mother yelling at he and Saldivar.

In summing up his remarks, Vitto implored Wanker to hand down the maximum enhancement sentence allowed by law.

“Under the totality of the circumstances and the facts of this case, your honor, it’s the position of the state that the maximum enhancement sentence should be applied to this case, and that’s eight to 20 years and it has to run consecutively,” he said. “Probation is not an option. That’s the sentence that the state is asking this court to impose.”

Wanker, meanwhile, gave Wilson the opportunity to address the court during the hearing.

“Your honor, I want to tell you that I am sorry,” a tearful Wilson exclaimed in part. “I know sorry can’t bring back a dead person, and I know sorry isn’t going to save me or fix all of the damage that has already been done by my actions. I am sorry, but there is nothing that I can do about it though. Your honor, whatever you choose to do today, I am willing to accept it because what I did was wrong, period. I should not have been there and I shouldn’t have said yes. It doesn’t matter if it wasn’t my plan, but I said yes. It wouldn’t have happened if it wasn’t for me. I’m sorry, I’m sorry. That’s all your honor.”

Before closing the sentencing hearing, Wanker herself provided a few thoughts on the crime.

Wanker also provided a few words of encouragement to Wilson.

“I’m not giving up on you,” she said in part. “I think that maybe your destiny is to do great things. You now have a choice. You can sit and do nothing while you’re in prison, or you can make the best of a situation while you are there, and show the Department of Corrections that you want to make a change, so that when you become eligible for parole, that you get out on parole on your first meeting, but that’s up to you. You have accepted responsibility. Given the brutality of this crime, those pictures in this case are horrible. Given the impact that it had, I think it’s a fair sentence. I wish you the best.”

It should be noted that Saldivar’s sentencing hearing, which was also scheduled on Wednesday, was postponed due to a paperwork issue.