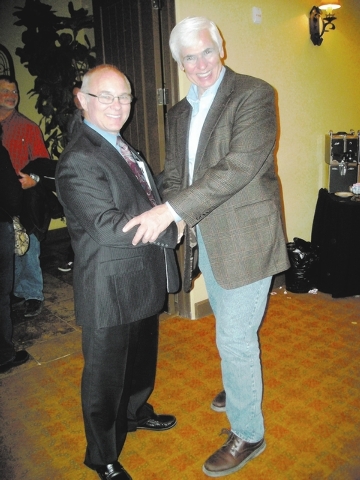 Over 200 people packed the Mountain Falls banquet room Saturday night as Assistant Sheriff Rick Marshall kicked off his campaign in a big way for the sheriff’s position.

Some residents received robo calls to help ensure a big attendance. Lynn Peterson and the Phat Katz served up musical entertainment, they jokingly played Eric Clapton’s hit “I Shot the Sheriff” during an auction to raise campaign cash.

Marshall announced his intentions early to seek the county’s top law enforcement spot. As of Jan. 12, he reported $5,199.94 in contributions to his campaign, $3,099.94 from himself. C &S Waste Solutions contributed $1,500, Pahrump Valley Disposal owner John Shea is the registered agent, secretary and treasurer of the company. Marshall reported $3,100.84 in campaign expenses so far, $1,295 of that went to Brian K Media and Design of Pahrump.

Marshall ran for sheriff when DeMeo won his first term in 2002, finishing third with almost 20 percent of the vote in the primary. DeMeo finished just ahead of incumbent Wade Lieseke Jr. in that six-way race, with 31.7 percent of the vote to Lieseke’s 29.9 percent.

In his campaign speech at the campaign kickoff, Marshall said it has been his honor to serve in the sheriff’s office for the last 26 years. He began as a deputy in remote Gabbs. He said law enforcement is about serving people and keeping families and communities safe.

“My vision is to lead an effective, efficient and service-oriented sheriff’s office,” Marshall said. “Experience has shown me that communities are always safer when your public service officers work with the people they are responsible for protection to solve and prevent crime.”

He said, “I came into this job with a commitment to keep the people and visitors of Nye County safe by reducing crime rates, putting prevention programs in place and partnering with the public and other agencies to make Nye County a great place to live, work, play and raise a family.”

Marshall outlined his investment in the community, working with the Cub Scouts and Boy Scouts, coaching AYSO soccer and wrestling. He touted a bachelor’s degree in public administration and two associate degrees, one in criminal justice, the other in paralegal studies. His executive certification from the Nevada Commission on Peace Officers Standards and Training (POST) is the highest level.

In the past few years with the struggling economy Marshall said the sheriff’s department has had to do the job with less resources. As assistant sheriff that included reducing the budget, reducing manpower and still protecting communities.

Employees have been asked to work above and beyond their work schedule with little or no overtime, only compensatory (comp) time sometime in the future.

He said the sheriff’s department must work with the county commission to add more “boots on the ground,” deputies on the front line, but he took credit for authoring applications for $22 million in grants to fund personnel, equipment and remodel buildings to reduce the burden on the taxpayer.

“Sheriff DeMeo has laid a solid foundation. He has cultivated professionalism, core values and the pursuit of excellence. Those traits are absolutely necessary as we move forward. We have held together as an agency as we have weathered the economic waves that have rocked our country and our communities,” Marshall said.

He pledged to continue to demand professionalism and an aggressive approach to training and educational programs.

“We must continue to work with the Board of County Commissioners, with the county manager and others in Nye County government, to ensure the sheriff’s office is operating within our authorized budget. However, let me be crystal clear, as your sheriff I will never allow politics through the budgetary process to put you or your loved ones in danger,” Marshall said.

In November 2012, county commissioners voted to ask the Nevada Attorney General’s Office to prosecute DeMeo for exceeding his budget. But the AG’s office said it lacked proof of intent.

DeMeo’s departure leaves a void a crowd of candidates are anxious to fill. Mark Zane, an undersheriff in the 1980s, who is now president of Zane Investigations, came out early in the race. Carlo Verdi is running; he lists 29 years of law enforcement experience. Perennial candidates Ray “The Flagman” Mielzynski and Ted Holmes say they will run. District attorney’s investigator Sharon Wehrly, detective Eric Murphy, deputy Tom O’Donnell and former deputy William Tidmarsh have all announced plans to run.

The primary will be held June 10 with the general election on Nov. 4.