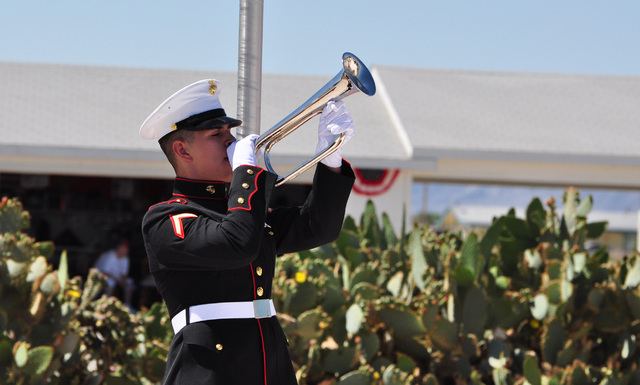 Retired U.S. Marine Corps Maj. Roger Chaput wants Americans to understand at least one thing about Monday’s Memorial Day observance – the holiday is not about having backyard barbecues, taking advantage of sales or heading out to the lake or beach.

The site is located at 1483 Gamebird Road, near Money Street.

Chaput said the service will include a benediction for all past and present members of the military, as well as what’s known as a ‘Committal’ service.

“Committal services are generally 20 minutes in length, which includes the time needed for rendering of military honors,” he said. “We do an average of three committals every year at the site. We had some on other dates in between Memorial Day where people have requested a committal for a couple of people.”

“Sergeant Joe Moreno Jr., passed away a few weeks ago and he was G.G. Sweet’s driver in Korea,” he said. “We also have another eulogy for Corporal Robert A. Hunn, who passed away last year. Joe was from California, while both Hunn and Walsh are Pahrump natives.”

During the committal, Pahrump Pastor Lonnie Biggs, from Shadow Mountain Christian Fellowship will preside over the disposal of ashes down the park’s burial tube, followed by a burial flag ceremony.

“Both Hunn and Walsh have both received flags,” he said. “Moreno has not, but one of the sisters who is coming in from California will be receiving that flag.”

Chaput also said two armored vehicles that served in battle will be on display at the service.

“We have the Marine Corps Reserve unit from Las Vegas coming out with a couple of trucks that we first got when we went into Afghanistan,” he said. “A local resident by the name of Tim Callahan was a motor transportation officer in Iraq and he ran convoys all over the place. He will be giving a little dissertation about those trucks and we will have the trucks there on display by the monuments for folks to look at.”

Chaput, a resident of Lake Havasu City, noted that just three of his fellow platoon members are still living, but he will be the only one to attend this year’s service.

“I’m the only one that’s left,” he said. “I drive in every year from Lake Havasu to officiate the ceremony. I am 84 years old, so at some point in time I am going to recruit somebody who can take over for me.”

Since 2000, when Memorial Day services began at the park, one constant fixture has been the posting and retirement of the colors by high school JROTC programs.

Chaput said he’s been experiencing some problems over the past few years in having the programs presiding at the service.

During the first few years, a silent drill team from the JROTC program at Basic High School in Henderson performed the service.

“Unfortunately, here in Pahrump, Memorial Day comes after school is out, but we are very thankful that the kids in Pahrump’s JROTC unit are able to attend the ceremony and post the colors. The other problem was getting students to come because the parents wanted to shove off somewhere for the holiday weekend.”

A Navy and Marine Corps hymn, followed by a United States Air Force ballad, will conclude the service.