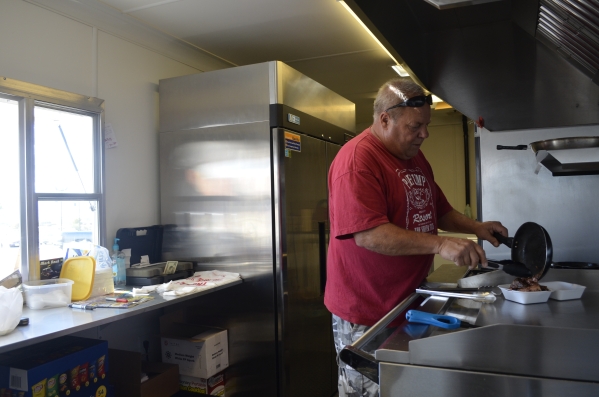 After a set of proposed regulations was discussed at a mobile food vending subcommittee meeting, officials hashed out a first set of preliminary rules that set out conditions for Nye County mobile food vendors.

Among those were a valid health department certificate, vending license, registration and insurance and a number of other mandatory requirements that could constitute a future ordinance that was spurred by parking complaints from motorists and other businesses in town.

“I think Pahrump is a great little town to do business in and I just started my business this year,” said vendor Jeanne Wright. “So far, I think it’s been going really well, but one question that I do have, and I think we should address here is the complaints. If you have the list of complaints that the planning department has received, if you are going to make recommendations and fix problems, then we have to know exactly what the complaints were so that we can work toward fixing them.”

Wright and several other local food vendors often operate along some of the busiest stretches of Highway 160. Nye County Planner Beth Lee said a few brick-and-mortar restaurants had expressed concerns about their proximity to mobile food trucks.

“The complaints boiled down basically to two categories: What we have gotten was parking on private property without property owners’ permission and you parked too close to existing brick-and-mortar restaurants,” Lee said.

“Of course restaurants are going to have some issues,” Wright said. “It is competition, but I’m pretty sure that’s what America’s based on.”

“I entered into that business because I knew that I could do it by myself, so if you take that step and you open a restaurant, there are a lot of things that you know that you have to do,” she added.

Another vendor, Pete Ellis, who parks his mobile food truck across the road from Saddle West, acknowledged that there could be some issues when it comes to competition between mobile food vendors and conventional restaurants.

“And you know what, I would guess that at least through the summer months, there’s probably a few people that utilize my business as opposed to going to brick-and-mortar restaurants,” he said.

Other conditions that were included in the first draft of regulations included being stationary in one location for more than six hours in a 24-hour period, having a conditional use permit that has to be renewed every six months and parking in accordance with the Nye County dust ordinance. Under proposed regulations, mobile food vendors are also prohibited from parking their unit in a Nye County or state right of way zone.

“I can tell you what customers like is to know where to find you,” Wright said. “And if you are on this corner today and on that corner tomorrow and that corner the next day. And I say this because this is what my people have said to me and there’s a lot of days that I can’t go out, it’s too windy.”

According to research done by Emergent for the National Restaurant Association, the growth of mobile food trucks will greatly increase in the next five years, generating up to $2.7 billion nationally by 2017 — up from $650 million in 2012.

The proposed regulations will be brought back in the ordinance format to be approved by members of the Regional Planning Commission before Nye County Commissioners make them part of the county code.