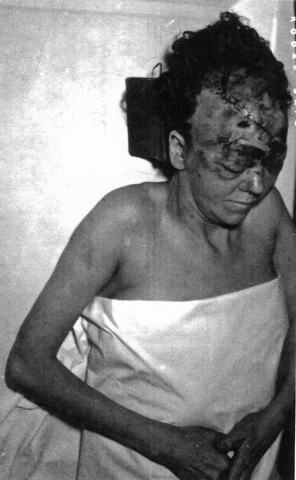 Editor’s note: This is the fourth in a series of stories by historian Bob McCracken on the history of prostitution in Nevada and Nye County. A new feature in the series will come out every Friday for the next several weeks.

The brutal attack on Alice Nashlund and Inez Parker in the Nugget Bar in Tonopah’s red-light district at about 10:30 p.m. Dec. 18, 1951, was one of the most sensational stories to ever come out of central Nevada.

Inez Parker was the operator of the Nugget Bar and Alice Nashlund was a prostitute who worked there.

The two women were discovered shortly after the attack lying on the floor of the bar/brothel by Gale Ives, who occupied a cabin behind the Nugget.

Ives told of finding the two women, both still alive but badly beaten.

Nashlund was lying at about the middle of the bar with her head under the bar rail. She died two days later.

Inez Parker was lying across the doorway of an adjoining room with her feet inside the barroom.

The only witness to the attack, she was confined to Nye General Hospital for several weeks recovering from her injuries.

Ray Millan, a man who had only recently moved to Tonopah, was named as the assailant.

He lived nearby, but disclaimed knowledge of the affair.

He was charged with first-degree murder, according to the Tonopah Times Bonanza, Dec. 28, 1951 issue.

Upon discovering the two women in the Nugget, Ives immediately went up the street to another bar and had Dr. Russell Joy, beloved long-time Tonopah physician, phoned.

The brutality of Nashlund’s murder led to an immediate outcry against the remaining brothels in Tonopah’s red-light district.

The Nugget Bar, along with Taxscine Ornelas’s establishment, Taxscine’s, quickly had their liquor licenses suspended for unlawful sale of liquor to minors.

The real reason, of course, was the bad feeling resulting from Nashlund’s murder.

District Attorney William J. Crowell announced immediate steps would be taken to enforce the law pertaining to unlawful operation of houses of prostitution in what remained of the “old Tonopah red-light district.”

The Tonopah Times Bonanza tried to put the matter in perspective. An article in mid-January 1952 read, “At one time during early boom days of southern Nevada, the [red light] district was alive with the surging flow of boom miners, buckaroos, and a heterogeneous mass of humanity of every walk of life, with dancehalls and saloons on every corner.”

But, the article noted, “Time and fire and buildings which were never built to withstand the ravages of either fell one by one to the toll and the district has since degenerated into a sorry eyesore — pathetic and forlorn in its emptiness, with only a few scattered shacks — even those denied the support of a neighboring structure, to ease their tumbling collapse.”

The article suggested the two existing brothels had been tolerated, allowed, “perhaps because old custom and tag-end remnants of a colorful and historical era, die slowly. But the steady march of time is an inexorable force, and walks hand in hand with ever-changing public opinion and social policy, which often spell doom to yesterday’s use and custom.”

A preliminary hearing was held in justice court in Tonopah on Jan. 25, 1952, regarding Raymond Millan’s role in the death of Alice Nashlund at the Nugget Bar.

He was bound over to district court on the charge of first-degree murder.

FACTS OF THE CASE

Ray Millan went on trial in Tonopah April 14, 1952, for the “bawdyhouse slaying of Alice Nashlund.”

It was the first murder trial in Tonopah in nine years.

Millan pleaded not guilty and was represented by attorney Peter Echevarria of Reno.

Inez Parker testified that Millan was in the Nugget Bar that fateful evening and nothing of incident happened; he posed no trouble.

Then he left the bar, only to return a few minutes later and begin choking her.

“I was seated in front of the bar and Alice, who had been drinking heavily, was behind it.”

Parker testified she sought to flee but Millan picked up a barstool and belabored her over the head and across the shoulders.

She sprawled across the threshold leading into the bedroom, but retained consciousness.

She testified she could hear, but not see, Millan beating Nashlund.

Millan returned to where Parker lay and lifted her skirt, muttering, “I wonder if she has any money on her.”

He did not find any and dashed from the establishment.

Gale Ives described how he found the two women lying on the floor.

Inez Parker, he said, was not unconscious, but when he tried to speak to her, she only mumbled and did not answer coherently.

Ives then immediately left the Nugget Bar and ran a short distance to Taxscine’s Bar, where Bonnie and Taxscine Ornelas and Raymond Millan were present.

He asked that a doctor be called.

Dr. Russell Joy testified that when he arrived in the Nugget Bar, he found the two injured women lying in pools of blood.

Nashlund appeared to be the most seriously injured.

She was unconscious; Parker was conscious.

Both were taken to Nye General Hospital and examined and tested.

Nashlund had “a badly crushed skull and lacerated scalp.”

Her injuries were in the front of her head and macerated brain tissue was visible. She had been drinking heavily. She died Dec. 20.

Inez Parker was found to have suffered a slight injury around the neck, a number of scalp lacerations on the back of her head, a fractured right rib, and injury to her right shoulder.

In the Nugget Bar, he found a number of barstools overturned on the floor and one wooden stool found in the adjoining bedroom had “splotches of blood on it, and strands of hair.”

When questioned, Lydon stated he didn’t have the necessary materials to lift fingerprints and consequently did not obtain any prints that might have existed on the stool or any other surface.

Raymond Millan took the stand in his own defense.

With the courtroom overflowing, Millan maintained his innocence. He admitted being in the Nugget Bar the night of the crime and of going to the back bedroom with Mrs. Parker.

He said Mrs. Nashlund soon entered the room and “began upbraiding Mrs. Parker for ‘taking business from a working girl.’”

The two women then went into the bar, where, Millan said, they began arguing and scuffling.

He suggested they “quiet down” and join him in a drink, and when they ignored him he “left the premises.”

Millan, in the meantime, was described as a miner and, as far as anybody knew, a peaceful and respected citizen.

He had arrived in Tonopah in December and rented a small cabin and was prepared to remain a month or more.

The trial of Raymond Millan for the murder of Alice Nashlund went to the jury on April 18, 1952.

The jury deliberated only 45 minutes.

At 5:05 p.m., jury foreman Jack Hall of Tonopah read the verdict: Not Guilty!

The verdict would have come even sooner but several members of the jury consumed time assessing a resolution recommending that the conduct of certain town and county officials be investigated.

Another proposal considered by the jury was for them as a body to congratulate Millan and apologize to him for keeping him in jail for four months.

The jury, however, was unable to make the announcement when reading the verdict because courtroom well-wishers swarmed over the defendant to shake his hand and slap his back.

Twelve minutes after the verdict had been read, when Millan and his attorney, Peter Echeverria, stepped from their car in downtown Tonopah, a special extra edition of the Tonopah Times-Bonanza hit the street.

The regular edition had come out that morning. It was the first extra edition by the newspaper since Pearl Harbor.

Public indignation led to District Judge William D. Hatton directing that a grand jury be convened in Tonopah on April 30, 1952, to look into the matter.

By late May, the grand jury was in the closing stages of its efforts. Basically, it was plowing old ground — that is to say, collecting testimony from people originally questioned in Millan’s trial.

The 17-member jury was headed by foreman Jack Buckhouse.

The jury concluded: “After a complete consideration of all facts which are available to your grand jury and after careful deliberation,” Alice Nashlund came to her death by having had, as the newspaper reported, “her skull crushed in Nye County, Nevada,” with the crime being committed by “a person or persons unknown and still at large.”

On June 20, 1952, the Tonopah Times-Bonanza reported that Raymond Millan was confined to the Nye County General Hospital. Some days later, the paper announced that Millan had died in the hospital on July 4, 1952, having been confined there for several weeks. His illness was aggravated by silicosis.

Millan lived two-and-a-half months after his acquittal on the Alice Nashlund murder charges.

There was considerable public indignation in Tonopah over the manner in which authorities had conducted the investigation on Nashlund’s murder. Within days, Elizabeth S. “Betty” French, a sister of Nashlund, posted a $100 cash reward through the First National Bank of Nevada “for information leading to the arrest and conviction of the person or persons responsible for the death of Alice Nashlund.”

French said, “I’m completely satisfied as to the innocence of Raymond Millan.”

The Tonopah Times Bonanza added $100 to the reward, bringing the total to $200. French is also quoted as saying, “At the same time, I feel, as only a sister can, that everything possible should be done by the authorities to bring Alice’s murderer to the bar of justice.”

After the trial, she reiterated her contention that “the police have the wrong man.”