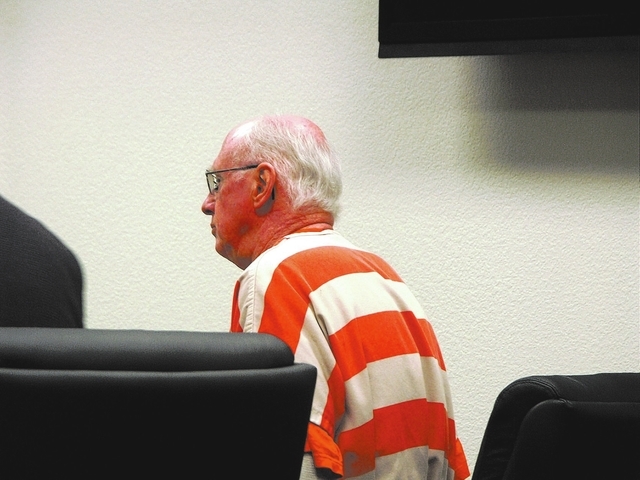 A former Nye County School District psychologist who was arrested on charges of producing child pornography earlier this year was sentenced to 10 years to life in prison this week in District Court.

Perry Allison Hood, 69, appeared Tuesday morning in Tonopah after he pleaded no contest in August to a single count of unlawful use of minor in producing pornography or as subject of sexual portrayal in performance.

The plea was entered after Hood accepted a plea deal in the case, in which the district attorney’s office agreed to drop four additional charges of possession of child pornography filed with the original criminal complaint in exchange for his plea to the remaining count.

Hood was arrested on Jan. 22 after detectives in Peoria, Ariz., contacted the Nye County Sheriff’s Office to inform them that they were working on a child pornography case in Arizona with ties to Tonopah.

According to the Peoria Police Department, Hood allegedly lured a young female out to a desolate desert area and photographed her in provocative clothing. After they returned to her residence, the victim told her parents about the incident and they went to the police to report Hood’s alleged behavior.

The two agencies subsequently teamed up to serve a search warrant at Hood’s Tonopah home, where they reportedly discovered more than 90 pages of explicit photos depicting minor females in various states of undress in addition to other photos of what appeared to be a young girl blindfolded and tied to Hood’s bed.

Hood reportedly told police at the time of the search the photos were research he was conducting to better understand young victims of sexual abuse.

He was arrested on 21 counts of possession of child pornography and booked into the Tonopah Detention Center in lieu of $1 million bail and later charged by the district attorney’s office in the case.

Deputy District Attorney John J. Friel Jr. told the court this week he felt Hood has failed to see the harm he’s done to his victims.

”He fails to see the true damage to the victims, their families, his co-workers, students and the community in terms of the mammoth breach of trust he violated,” the prosecutor said

“Diagnostically speaking, someone has to endorse pedophilic thoughts and urges in order to be diagnosed with pedophilia,” he added. “Mr. Hood is a pedophile (according to the diagnosis) and a sexual deviant.”

Hood’s defense attorney, Chris Arabia, said while some may feel Hood has not accepted responsibility for his actions, the man’s plea was in fact an acceptance of guilt, adding the victims would not have to be further traumatized by having to testify.

When given the opportunity to address the court in his own words, Hood reportedly said he was embarrassed and ashamed for what he had done.

The defendant said the actions that led him to this point today were not typical of who he is or has been, adding he had let everyone down including God and himself.

After listening to both the defense and prosecutions recommendations for sentencing, Judge Robert Lane ordered Hood be sent to the Nevada Department of Corrections to serve a sentence of 10 years to life in prison.

The former child psychologist is still facing charges in Arizona where the incident that led to his arrest was first reported.