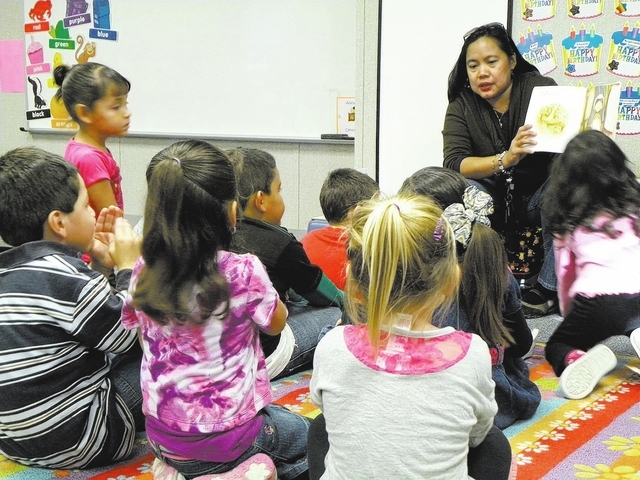 The Nye County School District recently started a pre-kindergarten program, with the help of state funding, targeting non-native English speaking children to give those students language skills they need to succeed as they progress through an English language-based curriculum.

The grant, also known as the 504 ELL Program, or the English Language Learning program, was passed by the legislature in September to set aside funds for the Nevada Department of Education to address low test scores found among students whose first language was something other than English in third grade classrooms across the state.

Every school district in the state received a portion of the fund set aside for the initiative, and were asked to use the money to either provide a reading intervention program for third grade ELL students to improve their test scores or to modify or create a pre-kindergarten program to give ELL students the skills they need to understand English and learn in an English language-based curriculum.

NCSD received approximately $121,500 from the grant in August, which the district decided to put toward starting a pre-kindergarten program to address the issue.

“Instead of waiting until the third grade to fix the problem, our district decided they would put it into a pre-k program to prevent the problem,” Linda Fitzgibbons, director of the pre-kindergarten program, said about the new initiative.

The classes, which began Nov. 18, are being taught primarily in English, but many things in the classrooms are in both English and Spanish.

Fitzgibbons said pre-kindergarten classes are typically where 3-year-old to 5-year-old children begin to build their vocabulary.

The hope with this program is that by teaching both English and Spanish speaking students the same English vocabulary as they learn about different topics will give the Spanish speaking children a good understanding of the English language before they enter the higher grade levels.

While the new program focuses largely on building students’ vocabulary, it also helps children prepare for kindergarten in other academic areas as well including the arts, language and literacy, math, fine and gross motor skills, science, self-help skills and socialization.

Fitzgibbons said when students graduate from any of their pre-kindergarten programs they will have a variety of skills their fellow classmates who didn’t attend a pre-kindergarten or preschool program might not have when they enter kindergarten.

“It’s not just the English thing, it’s the social impact as well. For the students to be able to sit down and use a pen — we get kids who don’t even know how to use a pen or a pencil and we literally have to teach them how to use one, or kids who don’t know how to cut with a pair of scissors – and so at least this way they’re going in there prepared. And if you walk into any given kindergarten class you’ll see that, you’ll see the ones who don’t know how to write or cut all the way to the pre-k kids who will know how to write their names and depending on how long we have them they’ll even have pre-reading skills,” she said.

And to further facilitate the skills and knowledge the pre-kindergarten students are receiving in class, the NCSD pre-kindergarten programs have a strict parent-involvement component to them as well.

Fitzgibbons said parents of students enrolled in NCSD pre-kindergarten classes are required to attend several parenting meetings or workshops each year as well as to document the time they spend with their children outside of school for “Parent and Child Time” or PACT, where they are required to do things like read with their children, play educational games with them, or do puzzles or other home and school related learning activities.

“We’re very strict about parent involvement,” Fitzgibbons said. “By the end of December, our parents must be up to date with their parenting classes and PACT time sheets. We tell them that’s your payment for this program, the time you spend with your child.”

While NCSD has had a state supported pre-kindergarten program in place for approximately eight years now, this program, funded by the additional grant money, will be comprised mostly of ELL students with only a small percentage of students being native English speakers.

“Seventy-five percent have to be ELL students, so 25 percent can be English language speaking, and they will be our models for our other children speaking Spanish,” Fitzgibbons explained.

Although the new ELL targeted program has only been up and running for approximately two weeks, the classes are already full with 20 children attending the half-day program in the morning and 20 students attending in the afternoon.

Like the traditional pre-kindergarten program offered through the school, children and their families must meet certain socio-economic qualifications to be accepted into the no-cost program.

The children must be at least 3 years old and their families must have an income level that qualifies them for the free and reduced school lunch program, or be considered a McKinney-Vento Homeless child, meaning they live in either non-permanent or inadequate living situations when away from school.

Additionally children must not currently be eligible to attend kindergarten or be enrolled in another preschool program and priority for this specific program is given to ELL students.

As of Monday, a large number of spots for next school year’s classes had already been filled. Fitzgibbons said there were approximately seven remaining spots for ELL students left for next year’s classes.

For more information about the ELL pre-kindergarten program or to enroll a new student, call the school district at 775-727-1875.