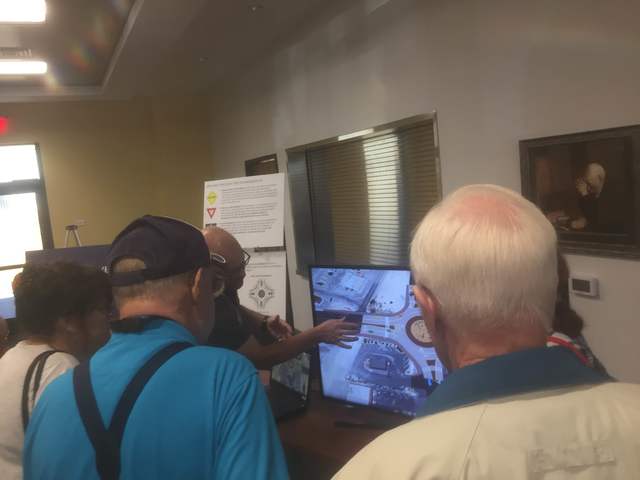 Pahrump Valley residents are shown how to properly navigate through a roundabout at the Nevada Department of Transportation's public workshop Thursday. Mick Akers/Pahrump Valley Times

The Nevada Department of Transportation hosted a public workshop on Thursday aimed at answering any lingering questions or concerns about the $4 million Highway 372 roundabout projects, which kicked off Oct. 3.

The meeting drew a large crowd to the new Valley Electric Conference Center, which had different stations dedicated to each roundabout, the one at Pahrump Valley Boulevard and the other at Blagg Road, as well as one dedicated to the contractor, Las Vegas Paving.

Some stations featured animated video clips about how to navigate each of the roundabouts, and NDOT representatives were at each station ready to take on any questions the residents had.

“The goal of this workshop is to show the public what the roundabouts are going to look like, what they can expect during construction and why they’re safer and how to drive through them,” said Lori Campbell, project manager.

Although there were some at the workshop that were excited about the latest traffic edition coming to the valley, the majority of those in attendance aren’t pleased with the project.

Campbell associated the initial negative perception of the roundabouts from Pahrump residents to the unfamiliarity of the road feature.

“Anything that’s new to a community is always a bit confusing and when we bring it to a community with a higher population of seniors, they just get concerned when something’s new and different,” she said. “I don’t think it’s negative, as much as it is just questioning and concern.”

Pahrump resident Vickie Fuller was one of many in attendance at the workshop who wasn’t in favor of the roundabouts, citing the motorists she encounters in town as a big reason why.

“I personally do not like them,” Fuller said, “I just think there is going to be so much confusion at first, but maybe down the road people won’t be nervous and not know what to do.

“I see people not even knowing what to do at a four-way stop. I think lights would have been better.”

In addition to safety, roundabouts are cheaper long term than a four-way traffic light, as there are almost no electrical costs related to the roundabouts, which run about $5,000 less per year to operate and maintain than a signaled intersection.

Despite the public workshop being set up to educate Pahrump drivers on how to drive through a roundabout, Fuller wasn’t certain it would help.

For those who might not feel like they have the roundabout navigation down before the April 2017 completion date, one local public official said he’s ready to step in and help.

“I’ve offered people myself, to take them and drive through the roundabouts once they build them, and show them how you’ve got to do it,” said Nye County Commissioner Butch Borasky.

Personally, Borasky is in support of the roundabouts, as he believes that it will improve the commute on the busy highway.

“I think it will improve traffic flow in town. As you know, we’re growing right now, we’ve had 30 or 40 homes applied for pads to build and that’s going to keep going like that for awhile,” he said. “So NDOT has to do something to address that.”

With the stretch of Highway 372 that encompasses the roundabout seeing several serious crashes over the years, Borasky explained the safety factor is a big deal with the project.

“If people drive through them properly, they are just as safe as anything else,” he said. “There’s a select group of folks in town who think there’s going to be an accident every 10 minutes, but the good thing with roundabouts is that it’s usually just a sideswipe.

“We’ve had two head-ons up here (on 372 near VEA) and one down here, there were deaths in two of them, and that’s two too many. I’d much rather see a bunch of cars with scrapes up the side of them than somebody dead and lying on the road.”

Roundabouts are one-way, circular intersections, in which traffic flows around a center island without stop signs or signals.

Construction, which began last week, is expected to take about six months to finish, with an April 2017 completion date.

Desert landscaping with a concrete wall, steel sculptures of wild horses, bighorn sheep and birds will adorn the roundabouts.

Also planned is a sort of welcome point to the town as the Blagg roundabout has a Pahrump sign on it with mountains in the background.

The construction period will feature a traffic plan with flaggers, nighttime work and phased construction while maintaining continual access for first responders.

Truck detours will be in place for the duration of the project and through traffic closures at north-south roads can also be expected.

For more information on roundabouts log on to www.Nvroads.com.