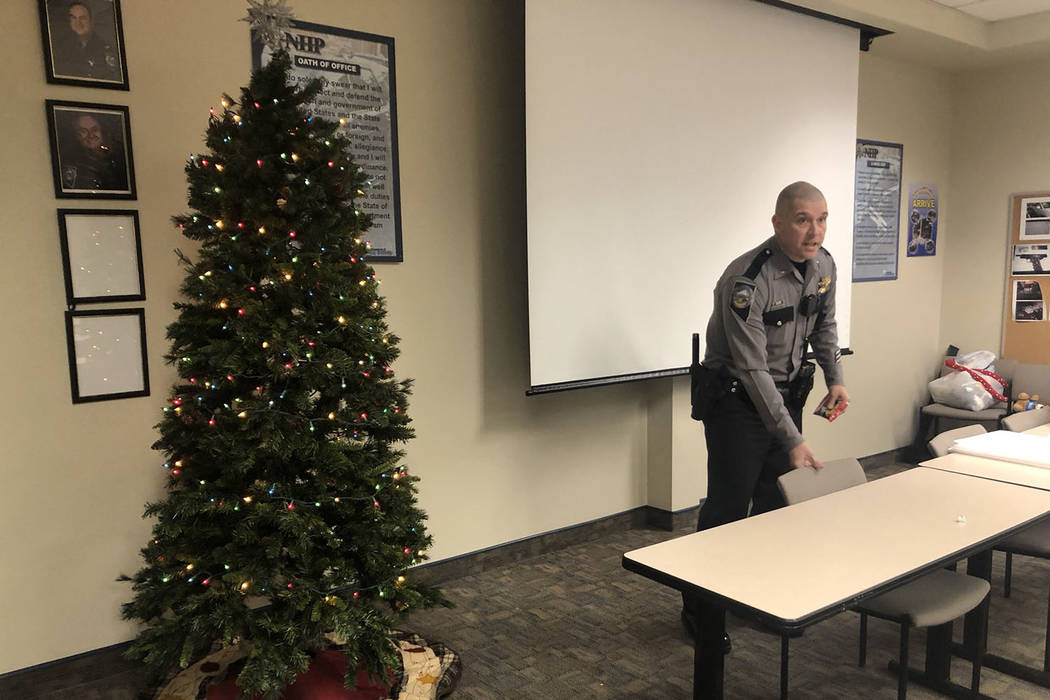 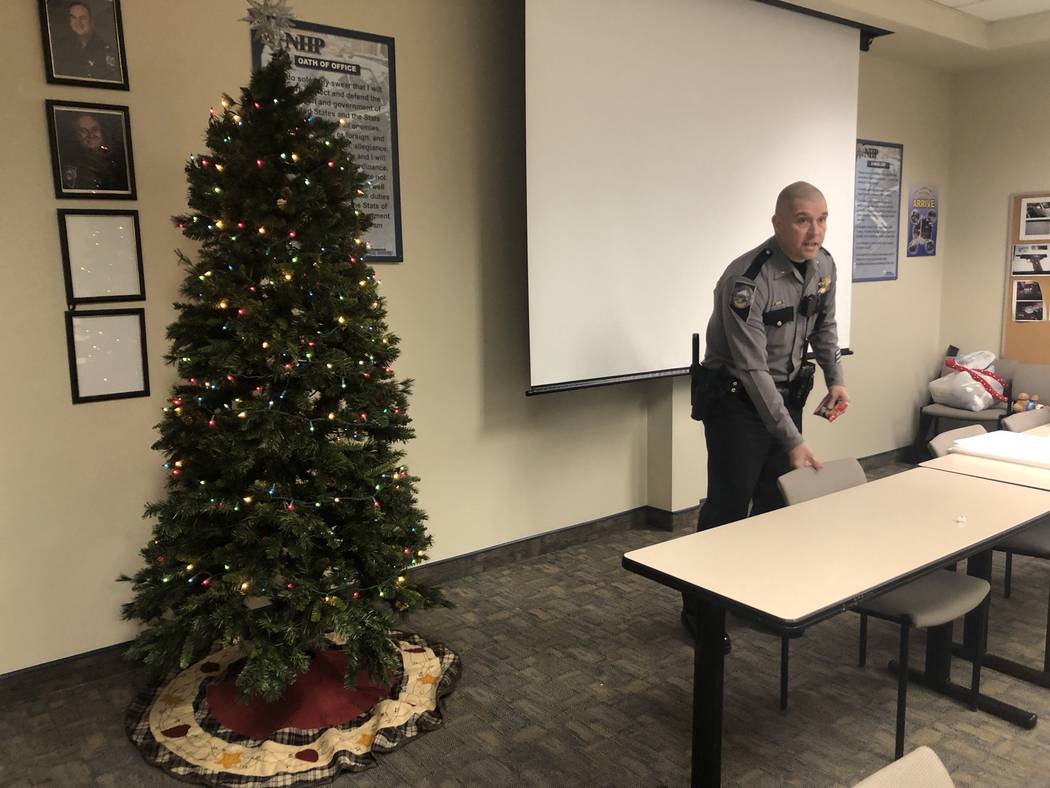 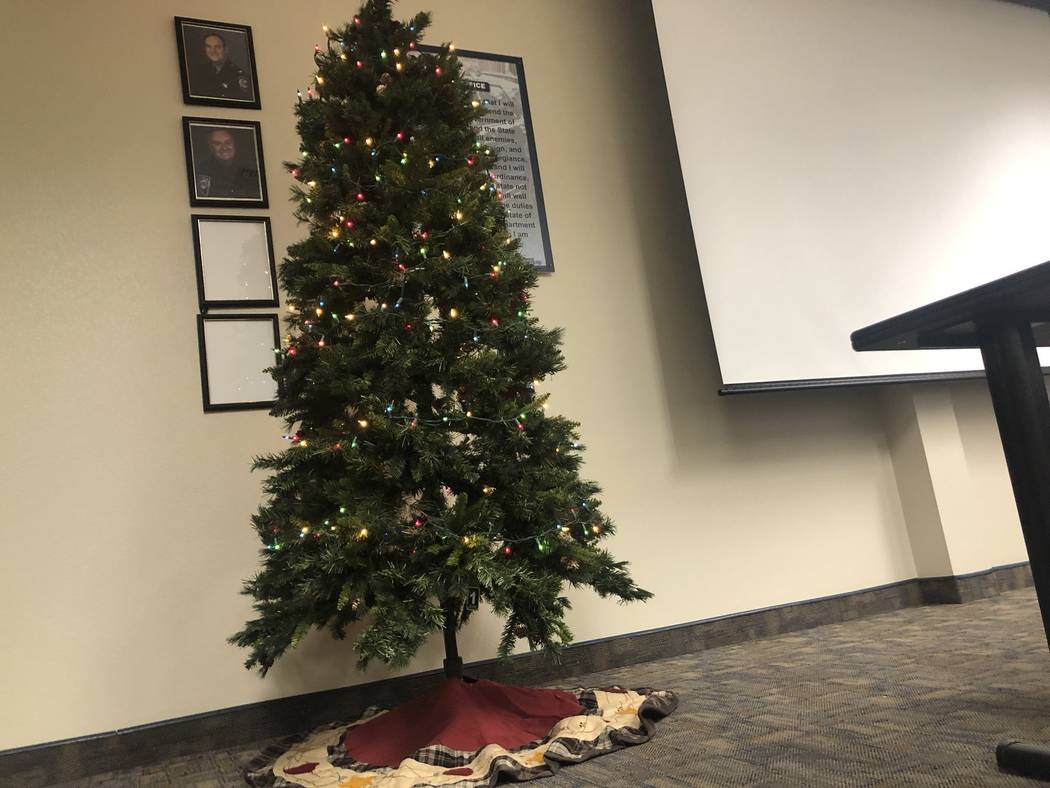 The Christmas Life Saving Tree stood in the Nevada Highway Patrol southern command's briefing room late Friday, November 30, 2018. Throughout December, troopers will add an ornament to the tree every time they arrest an impaired driver, which represents a life that they potentially saved. (Katelyn Newberg/ Las Vegas Review-Journal) 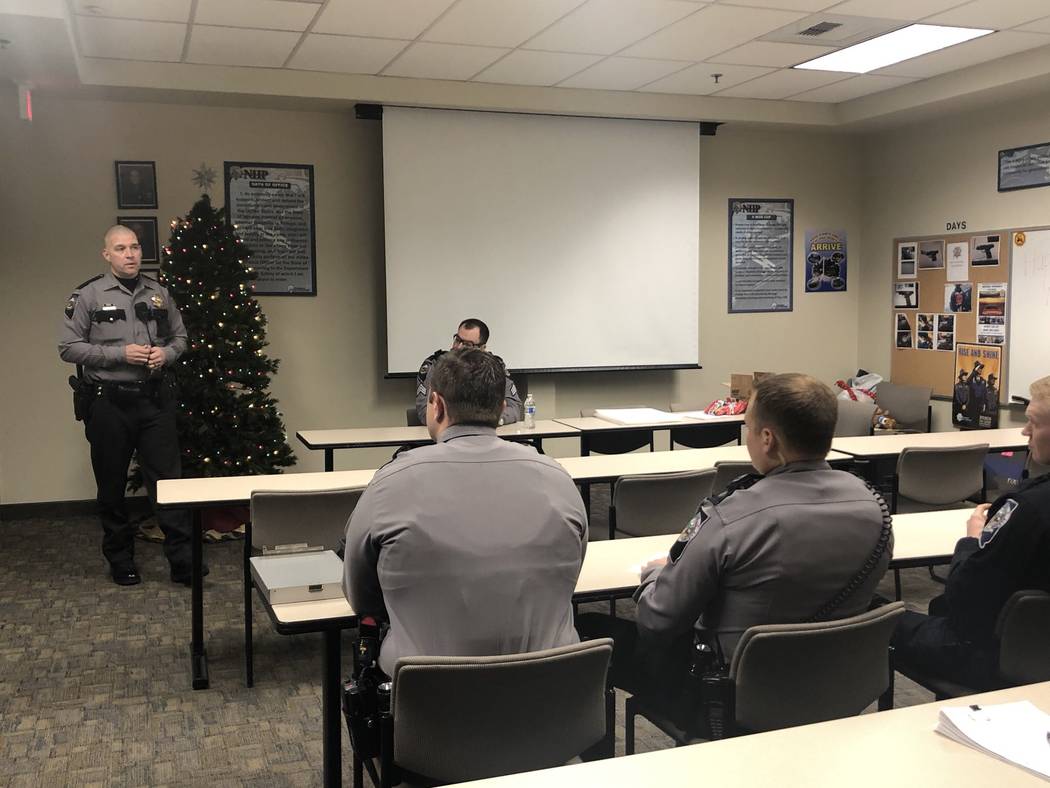 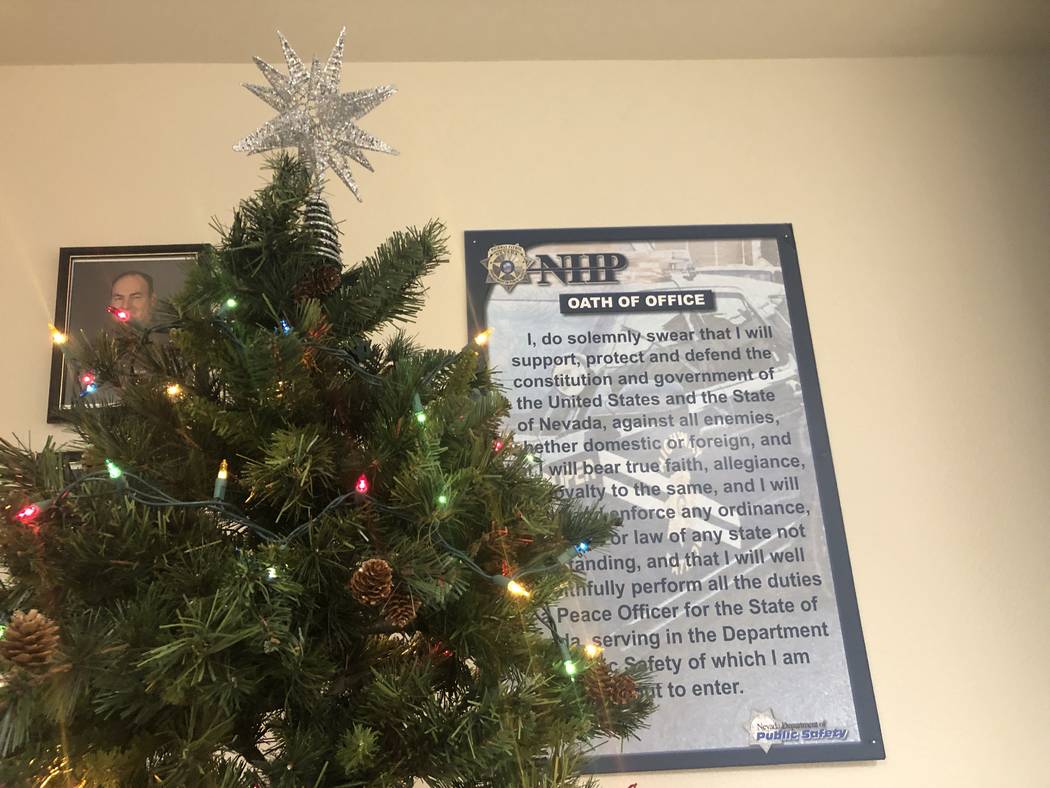 The Christmas Life Saving Tree stood in the Nevada Highway Patrol southern command's briefing room late Friday, November 30, 2018. Throughout December, troopers will add an ornament to the tree every time they arrest an impaired driver, which represents a life that they potentially saved. (Katelyn Newberg/ Las Vegas Review-Journal)

Every time a trooper from the Highway Patrol’s southern command arrests an impaired driver, a new ornament will be added to the Christmas tree, dubbed the Life Saving Tree.

Each ornament will represent a life potentially saved by removing an impaired driver from the Las Vegas Valley’s roadways during late nights and early mornings, NHP Lt. Anthony Munoz told troopers at their briefing Friday night.

“It’s one of those things where, when we go out every night, our mission is to leave the valley better than we found it, and we’re going to put extra emphasis on it this month,” Munoz told the troopers. “That includes removing impaired drivers.”

NHP spokesman Jason Buratczuk said people drive impaired at all times of day, but the graveyard shift started the Christmas tradition for themselves last year.

“We get DUIs on every shift,” he said. “This is the place of excess, so we’re gong to have DUIs and stuff like that all hours of the day.”

However, the number of DUI arrests slightly increases in the overnight hours, when there are fewer troopers on the road. The Highway Patrol typically has three squads of five to eight troopers during daylight hours, Buratczuk said.

But only two squads work overnight. Because of vacation, sick days and mandatory training, the graveyard shift is almost never fully staffed, he said.

Even with the fewer numbers, the overnight troopers take pride in preventing potentially fatal crashes. Every time a trooper makes a DUI arrest, each writes their badge number and the date on an ornament to hang on the Christmas tree, which sits in the Highway Patrol headquarters at 4615 W. Sunset Road.

Last year, about 160 ornaments hung from the tree by the end of December, Munoz said. With about 22 troopers on the graveyard shift, they’ve already arrested more than 1,000 impaired drivers this year, and they expect many more arrests in December.

“Hopefully people see this tree, and it’s a reminder not to drink and drive,” Munoz said. “You don’t want to end up on this tree.”

He said people over the holiday months should use taxis or ride-share services, a better alternative than facing a DUI felony and car tow payment. Most importantly, using such ride services prevents people from killing others.

The number of DUI arrests also has dropped in past years in the valley, likely because of the availability of services such as Uber and Lyft, Buratczuk said.

“The ride shares have stepped up big in this town,” he said.

But from Thanksgiving to New Years, troopers seem to be more likely to find DUI drivers on the road, he said.

“We know it’s the holiday months, we know people are going to go out and have fun and enjoy the office Christmas parties and the get-togethers with families,” Buratczuk said. “We just want people to do it responsibly.”