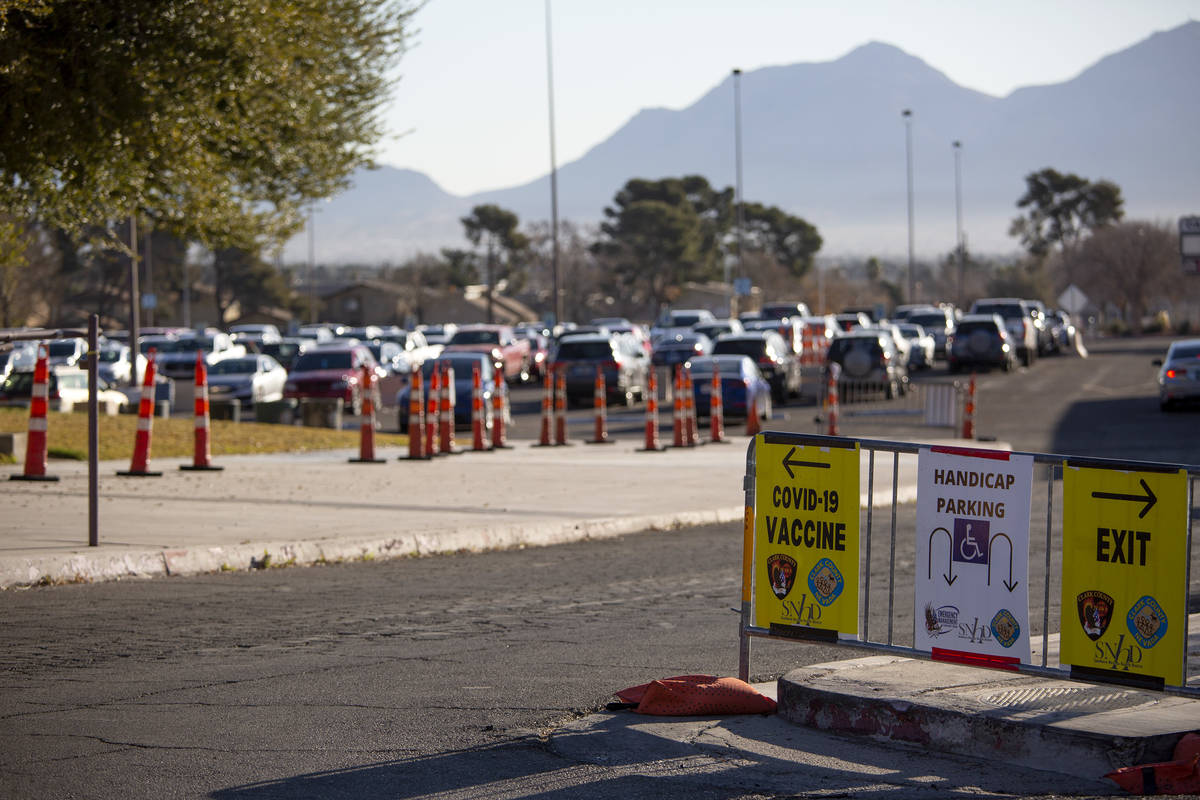 Signs indicate where to go to get a COVID-19 vaccine with a full parking lot in the background at Cashman Field on Saturday, Feb. 20, 2021, in Las Vegas. (Ellen Schmidt/Las Vegas Review-Journal) @ellenschmidttt 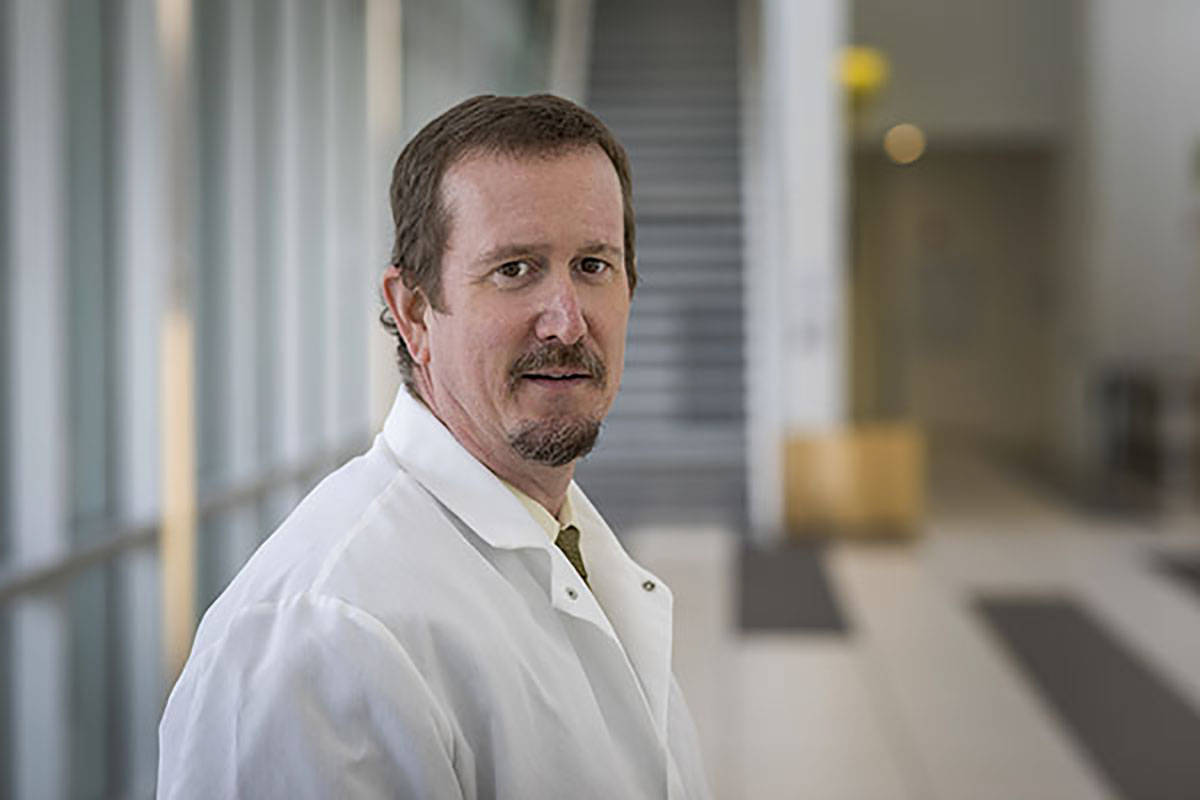 Mark Pandori, director of the Nevada State Public Health Laboratory at the University of Nevada, Reno, School of Medicine. (UNR)

Nevada may be on track to achieve “herd immunity” to COVID-19 despite the growing presence of more infectious variants in the state, a top public health official said Monday.

“It does appear that we are on a trajectory to achieve some of the low end of herd immunity in the next couple of months,” Mark Pandori, director of the Nevada State Public Health Laboratory, said during a COVID-19 briefing by state officials.

Even the current levels of immunity are thwarting to some degree the spread of the virus, he believes.

Herd immunity refers to the point at which a community has enough protection from a disease that it can no longer easily spread from person to person. This protection in an individual can be achieved through vaccination or coronavirus infection, both of which produce antibodies that fend off disease.

When enough individuals — somewhere from 70 to 90 percent of a community— have antibodies, disease transmission becomes unlikely, indirectly protecting even those who have not acquired them.

Data from the Centers for Disease Control and Prevention indicates that 23 percent of people in Nevada — nearly 1 in 4 — had coronavirus antibodies in mid-January. The younger the age group, the more likely it was that antibodies would be present. For those under age 18, the figure was 30 percent; for those over 65, it was only 9 percent.

The 2-month-old data was generated at a time when vaccinations had been offered for only a month and on a very limited basis. Now, 23 percent of Nevadans have received at least one dose of vaccine, according to the state’s COVID-19 dashboard.

This suggests that up to 46 percent of Nevadans have at least some level of protection to the virus, Pandori said in an email after the briefing, while noting there is probably some overlap between the group studied with antibodies and the group vaccinated. Still, more people have become infected and developed antibodies since the study two months ago.

Some level of protection

This leads him to conclude that while Nevada has not reached herd immunity, the state has achieved a level of protection “that dulls the virus’ ability to spread.”

“It’s an educated guess, it’s not proof, but it’s one of the best explanations” for why the presence of the virus is declining, he said.

The numbers of cases, hospitalizations and deaths in Nevada all are continuing to decline. Under 5 percent of COVID-19 tests are coming back positive for the virus.

The potential fly in the ointment is the growing presence of variants, versions of the virus with mutations that, in some cases, allow it to spread more easily.

There are at least 43 variants of virus spreading in the state, said Pandori, whose lab at the School of Medicine at the University of Nevada, Reno does daily genetic analysis of positive cases. Four of these make up 65 percent of Nevada’s cases.

However, the CDC is now describing two variants first identified in California — B.1.427 and B.1.429 — as being “of concern,” Pandori said. There is some evidence that they spread more easily and may not respond as well to monoclonal antibody treatment for COVID-19. These variants make up about 25 percent of cases in the state.

Nevada also is seeing more cases of what often is described as the U.K, variant, or B.1.1.7. Pandori’s lab initially confirmed a single case in January and found about a half-dozen more in February. After several weeks without finding additional cases, the number grew last week to 37 cases, with another approximately 10 cases identified over the weekend, he said.

According to a statement last week from the Washoe County Health District, two cases of the variant were in people who attended a gathering of more than 70 people also attended by the county’s first identified case. Four other cases were linked to a youth sports club.

Pandori acknowledged that variants create uncertainty about the course of the pandemic.

“What we don’t know, and what we didn’t have in the past, is the recipe of, of opening things up and having people get together in the presence of variants,” Pandori said. “Now, that recipe could mean that my hypothesis is incorrect, that the presence of these variants means that it’s going to get around some of this herd immunity.”

Even if that’s the case, Pandori said, approved U.S. vaccines have been shown to be effective against the U.K. variant. The South African variant that is less responsive to vaccines does not appear to be circulating in the state in high numbers.

Despite the challenges posed by variants, he believes that the state will continue to see a sustained decline in cases.

Brian Labus, an epidemiologist with the UNLV School of Public Health, said that the presence of variants makes the goal of herd immunity a “moving target.”

He also emphasized that children, who make up 1 in 5 Nevadans, cannot yet be vaccinated against COVID-19. Vaccines still need to be further studied in those under age 16.

The effects of “vaccine hesitancy” also have not been fully felt, he said. “There will be a point where people aren’t lining up anymore” to get the vaccine, he said. “It’s going to slow down our vaccination rates over time.”

Still, he said he thought it wasn’t unreasonable that the pandemic could be tamed by the end of the year or even within a few months. The virus wouldn’t be eradicated, he noted, but would be circulating at lower levels in the community.

“There’s a bunch of moving pieces, and they’re not all clear,” Labus said. “And we’ll have to see how those all come together later this year and lead us to a point where we can protect the entire community through immunity in the population.”