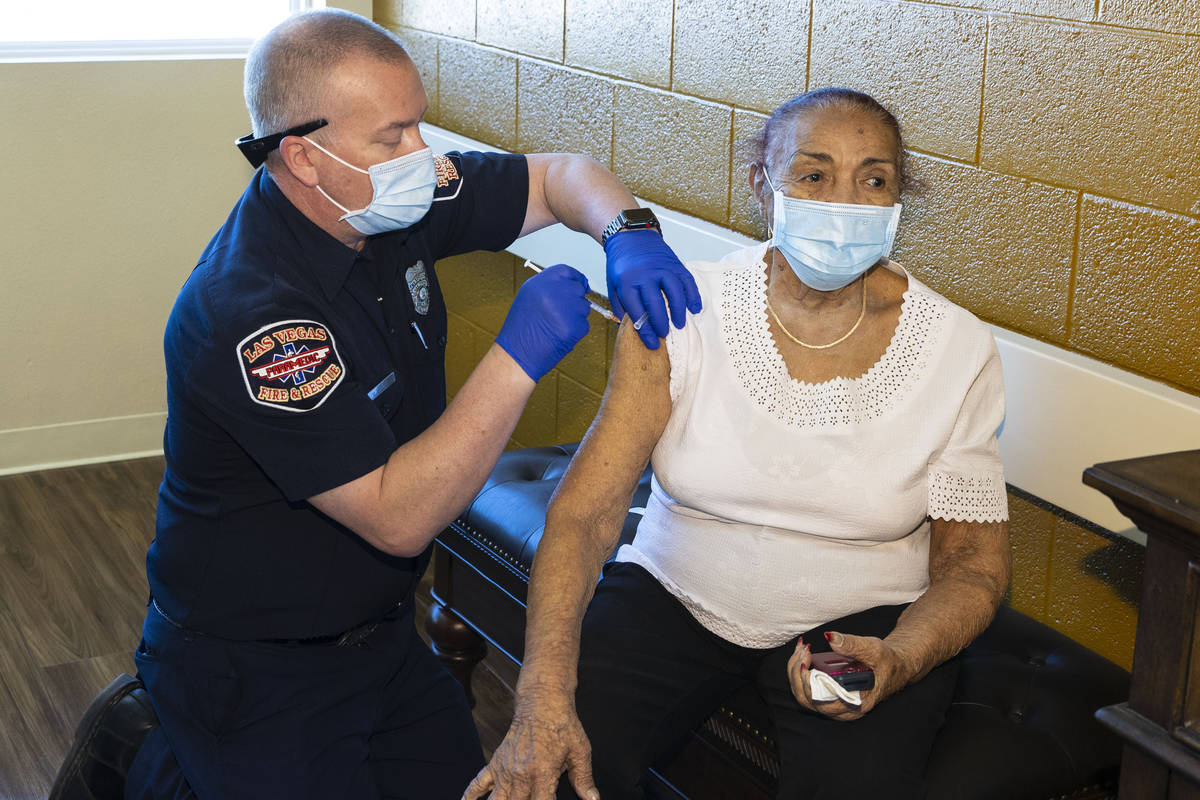 WASHINGTON — Nevada has plummeted to the bottom of a federal list for the percentage of vaccinations for the most vulnerable population — nursing home residents.

New data from the Centers for Medicare and Medicaid Services shows Nevada stands as the worst U.S. state for protecting seniors living in care facilities.

The shocking 61 percent vaccination rate of seniors in Nevada nursing homes, compared with 95 percent for Vermont, prompted the state’s U.S. senators to urge Health Secretary Xavier Becerra to target seniors in the state for federal funds and efforts.

Another analysis this week by AARP found similar results and prompted that nonprofit senior advocacy group to sound the alarm in Nevada.

In Nevada, 65.8 percent of nursing home residents have been fully vaccinated with 55.6 percent of staff, AARP found.

The two reports come as Nevada has become a hot spot for coronavirus infections while lagging in vaccinating its residents. The state’s coronavirus website shows that just 46.6 percent of the state’s population age 12 and older has been vaccinated. That compares with a nationwide rate for the same age group of 56.9 percent, according to the Centers for Disease Control and Prevention.

The alarming findings on nursing homes prompted Sen. Catherine Cortez Masto, D-Nev., to call on the Biden administration to do everything “to help close this vaccination gap as soon as possible.”

Cortez Masto and Sen. Jacky Rosen, D-Nev., said the situation is urgent in a July 16 letter to Becerra and the Department of Health and Human Services.

“Across the U.S. we are facing new challenges in the form of variants that put communities with high concentrations of unvaccinated persons at even greater risk for serious COVID-19 illness,” wrote the senators. “This makes our efforts to boost vaccination rates all the more imperative, especially among vulnerable populations like seniors and communities of color.”

The senators noted that $8.6 billion is included in the American Rescue Plan for the federal health agency to inform, educate and encourage hesitant seniors to get the shots.

Those remedies, though, don’t explain why the state lags behind other states.

Statistics released July 14 by the Centers for Medicare and Medicaid Services ranked all 50 states, territories and the District of Columbia for vaccinations of residents at nursing homes. Nevada was lowest of any state, just ahead of Guam and behind Puerto Rico, for vaccinations.

Guam, Nevada, Puerto Rico and Arizona were under 70 percent for nursing home residents vaccinated. All other states and DC were above 70 percent.

Cortez Masto and Rosen have asked Becerra and his department to determine whether the low rates are because of vaccine hesitancy and to use resources to educate and address the problem.

The other issue is the low rate of vaccinations for Nevada nursing home staff, as noted in the AARP analysis. It also showed that 25 percent of Nevada nursing homes reported staff and nurse shortages during the last reporting period that ended June 20.

Staff shortages and low vaccination rates among nurses and aides could compound the problem, officials said.

The dismal ranking is the second this year for Nevada. The state also ranked on the low end of vaccinations for seniors after the Trump administration rollout of Operation Warp Speed accelerated the process to get vaccines to the public.

States were allowed to opt into a federal plan that allowed large pharmacy chains to deliver and administer the vaccines. Some smaller states, however, did not participate because of rural populations that are not served by the bigger stores.

Nevada is a rural state, but West Virginia, with less population and smaller cities, had an 84 percent vaccination rate, and Maine had 90 percent of its seniors in facilities vaccinated, according to the CMMS survey.

Lynne Fruth, president of Fruth Pharmacy in West Virginia, said the governor’s decision to make nursing homes the No. 1 priority at the outset of the vaccination campaign helped them jump ahead of other states in inoculating seniors in facilities.

“West Virginia made a more humanitarian decision to get the nursing home patients vaccinated” by using large and small pharmacy chains, Fruth said in a telephone interview.

Other problems that were reported in Nevada and other states were the failure of complete and timely reporting of vaccinations because of bureaucratic hurdles and noncompliance.

Since the rollout, the Biden administration has imposed monetary penalties on nursing homes that do not meet reporting guidelines, accuracy and deadlines. Those penalties went into effect on May 1.