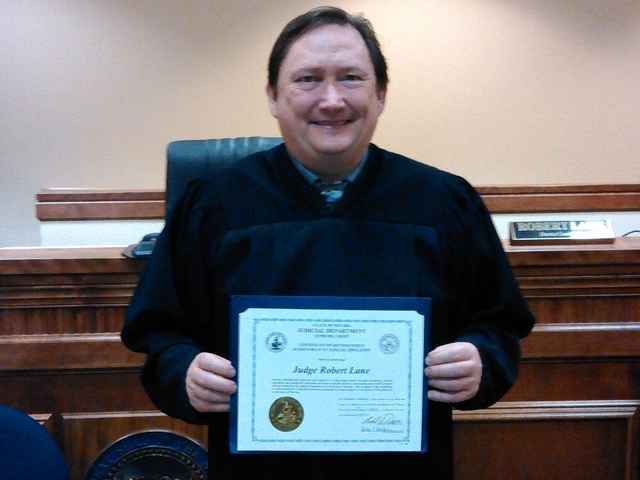 Lane not only believes it, he also lives it.

Both Lane and fellow Fifth District Court Judge Kimberly Wanker were recognized by the State of Nevada for their respective achievements in continuing their judicial education.

Lane noted at least one important reason why he personally strives to advance his knowledge.

“This is very important because as you get old, you forget some things,” he said with a laugh. “Yes we keep going to classes and keep learning areas like the rules of evidence, scientific procedures and expert witnesses. You learn all this for when you do criminal or civil trials, so you know how to rule on the motion.”

The Nevada Supreme Court requires lawyers and judges to continue their education throughout their legal careers by earning continuing education credits.

They need to earn a minimum of 10-or-12 credits per year of legal education.

During his 15-plus years on the bench in Pahrump, Lane has accumulated more than 640 hours of continuing legal education.

“Spending so many years as a judge you’re bound to get quite a buildup of those credits,” he said. “Most of the judges go to the Judicial College in Reno where we take classes to improve our skills. I was trying for a master’s degree so I took a whole bunch of credits and accumulated enough to earn the award.”

“You don’t think about getting an award but the credits build up to the point where you attend the Judicial Conference in Reno or Las Vegas and they acknowledge the judges who won the award.”

According to his bio, he was the first to serve in the new Fifth District Judicial seat in Pahrump presiding over criminal, civil, family, juvenile, probate, child welfare and other legal matters.

He started the Drug Court program in 2002 and has served on several state boards including Judicial Ethics, Judicial Education, and Specialty Courts.

Judge Wanker, who accumulated 240 hours, was unavailable for comment.

Wanker was appointed to the Fifth Judicial District Court by Governor Brian Sandoval after the passing of longtime District Judge John P. Davis.

Wanker, who prefers to be referred to as “Kim” outside of the courtroom, is the first rural female District Judge in Nevada.

According to her bio, she is licensed to practice law in the states of Nevada, Colorado, and Arizona.